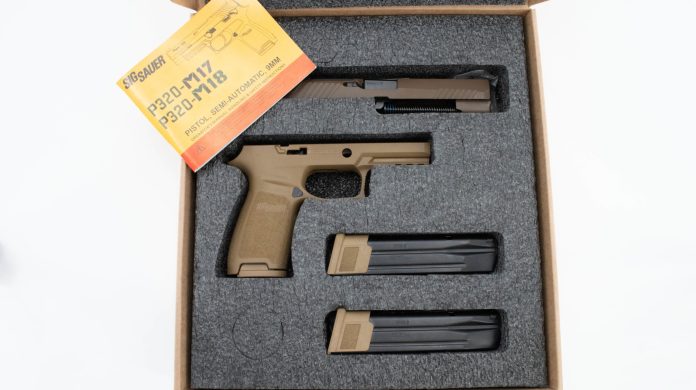 With the modularity of the SIG P320 users can easily swap out just about everything on the gun and do it affordably. The most popular (and least expensive swap) is the grip module which can be found for as little as $9.99, but usually run around $40 for a polymer frame from SIG SAUER.

And, of course, kits exist that let you reconfigure your P320 from one model to another by providing everything but the fire control unit (FCU). They ship directly to your door.

A conversion kit that interested me was the M17 X-Change to swap a non-manual safety P320 to the US Army’s new service weapon. The X-Change kit includes a completed slide and barrel, grip module, three magazines, a manual very reminiscent of an Army Technical Manual, and a slot for the challenge coin you don’t get when you buy the kit instead of the complete firearm.

Installation/completion is toolless and simple. Remove the takedown lever to remove your FCU from your existing P320. Insert the FCU in the X-Change M17 grip module, then the slide stop, slap the completed slide and barrel on and you’re done.

Since YouTube won’t let us show that– they consider it “gun construction” — we had to film as if it was a complete M17. A look at the kit’s components can be seen in the tabletop video below.

So why would someone buy an X-Change kit instead of the complete firearm? The reason I went for it was financial. The going rate for the kit was about $200-300 when I bought it. Now they’re gong for about $500, still less than a new M17.

I could also see the kit as a way for those living in the US, but outside the Constitutional United States to get an M17 without the rights-defying hassle some states have tacked on to a transfer.

To be clear to any of those who don’t understand the SIG FCU system: The X-Change kit is NOT a firearm and requires an existing P320 fire control unit in order to be used as a firearm. It is for that reason that these kits can be sold directly to consumers without involvement of a licensed firearms dealer.

After about 60 seconds of fumbling the FCU out of my X-Compact and into the M17 grip module, I had myself an M17 minus the manual safety and plus the X-model straight trigger. To see how the thing ran and experience a “discount” M17 we hit the range for our standard battery of tests.

The video below shows them all unscripted and unedited: absolute first shots, testing the gun and magazine’s ability to run fully stuffed, testing to see what loads the gun would cycle, and more.

The range experience with our conversion M17 was excellent. As one would expect, everything worked perfectly and my compact P320 can now easily become a full size when the need or interest arises.

With three magazines, a grip module, and complete slide the X-Change kit is a great way to experience another model of P320 for less cost and hassle than acquiring another complete pistol.

The Pros and Cons of Your Three Main Options