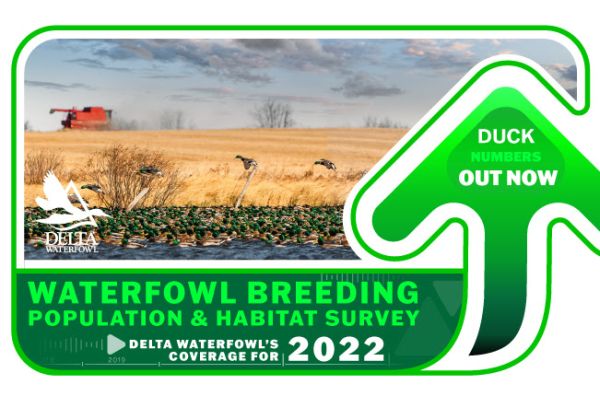 May pond counts are 4% above the long-term average, which should lead to good duck production and a strong fall flight

BISMARCK, NORTH DAKOTA — After being cancelled for the previous two years by concerns over COVID-19, the U.S. Fish and Wildlife Service and Canadian Wildlife Service were able to conduct the annual Waterfowl Breeding Population and Habitat Survey this spring. The results were released today in USFWS 2022 Waterfowl Status Report.

The survey, which is used to set hunting regulations throughout North America, put the total spring breeding population index at 34.2 million ducks, which is 4% below the long-term average and 12% below the 2019 index. Importantly, the May pond count, a key indicator of duck production potential, showed 5.45 million ponds, which is 4% above the long-term average and 9% above the 2019 index.

“Given the widespread dry conditions last year across most of the prairies where ducks breed, it’s not surprising that the breeding population number is lower than it had been throughout most of the 2010s,” said Dr. Chris Nicolai, waterfowl scientist for Delta Waterfowl. “The good news is that much of the prairie — especially the Dakotas, Manitoba, and eastern Saskatchewan — was really wet this spring. Duck production should be good to excellent across the eastern part of the prairie and in the northern areas, too.”

“Predators have a hard time in drought years just like ducks do, so ducks tend to get a break the when the water comes back on the prairies,” he said. “Our Predator Management sites and duck nesting surveys are showing very high nest success this year.”

“Teal numbers are the surprise of the survey,” Rohwer said. “It’s the opposite of what we might expect, with bluewings being so high and greenwings being down.”

“Prairie-nesting duck species such as blue-winged teal, gadwalls, mallards and redheads should really benefit from the wet conditions in the eastern Dakotas and Manitoba,” Nicolai said. “Hunters should see a lot more young ducks compared to last year. Remember that we hunt the fall flight, not just the breeding population. The years when duck production is strong — like this year should be — generally provide the best hunting seasons.”

Pintails remain stuck in a long-term decline. They were estimated at 1.78 million, which is 21% below 2019 and 54% below the long-term average. Their numbers are the lowest in the history of the survey.

“It’s not surprising given the drought in Saskatchewan and on the prairies last year,” Rohwer said. “It was a real bad recipe for pintails to nest.”

In the Eastern Survey Area, which estimates duck abundance on breeding grounds in the Atlantic Flyway, mallards were up 15%, black ducks climbed 9% and green-winged teal numbers rose 7% percent from 2019. Ring-necked duck populations were down 11%, goldeneyes increased 23% and mergansers were up 13%. Waterfowl breeding habitat conditions were good to excellent across the Eastern Survey Area this spring.

May pond counts are a key driver of duck production, and the news is good for most of the prairie in 2022. Drought gripped the Prairie Pothole Region in 2021, but a series of major storms dumped snow and heavy rains across Manitoba and the Dakotas earlier this year, recharging critical wetland basins. That’s reflected in the May pond count, which showed 1.98 million ponds in the north-central United States, and 3.47 million ponds in prairie Canada. The total of 5.45 million ponds is 4% above the long-term average and 9% above 2019.

“Ice-out and nesting was delayed, but nesting conditions were good this spring because of the wet weather,” Buxton said.

Buxton, who runs Delta’s Predator Management program, pointed out that predator populations seemed to be down this spring, likely as a result of the significant drought conditions in 2021 and a harsh 2021-2022 winter.

“Duck production should be good this year, and appears to be phenomenal in parts of North Dakota this year,” Buxton said. “Water, including those temporary and seasonal ponds, stayed on the landscape late into the nesting season this year. That provides opportunities for hens that might have lost a first nest to predators to renest and hatch a brood.”

While habitat conditions were good to excellent on the eastern prairies, southwestern Saskatchewan and southern Alberta were dry this spring. The western United States — California in particular — remains mired in drought. Duck production in those areas is expected to be poor.

Overall, duck production is expected to be strong in 2022, which means more ducks over the decoys when waterfowl seasons get underway.

“It’s going to be another very good year to hunt waterfowl,” said Dr. Scott Petrie, chief executive officer of Delta Waterfowl. “All of us at The Duck Hunters Organization encourage you to have a safe and enjoyable hunting season.”

It’s Time for a FREE Hunt