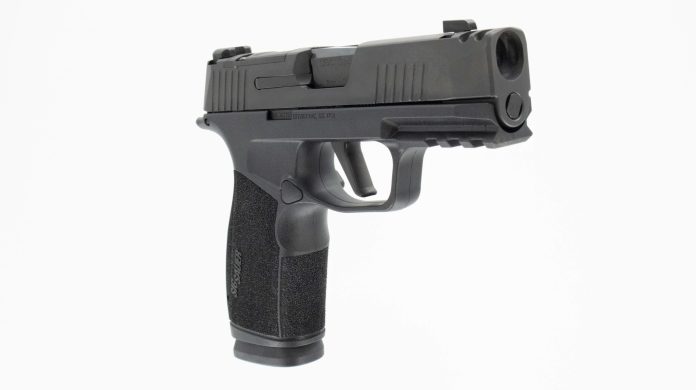 SIG SAUER continues to expand on its modular P365 platform, this time by increasing capacity to the full-size pistol range and creating an offering for those wanting to jump on the compensated carry gun trend.

A new grip module extends the grip length of the slim, modular P365 to accept a full 17 rounds of 9mm ammo. And by using the P365’s 3.1-inch barrel in the longer P365XL slide SIG has been able to use the extra room to integrate a compensator for reducing muzzle flip.

A tabletop look at this new configuration can be seen in the video below . . .

The new grip module has been claimed by some to be very similar in size to SIG’s new P322 rimfire pistol, but as we don’t have one we can’t make that comparison. What we can say is that by keeping with the P365 platform and magazines, increasing capacity to 17 rounds only slightly lengthens the grip.

Shooters with larger hands who found themselves almost satisfied with a P365XL and 15-round magazine will probably find the P365 XMACRO finally has a place for all their fingers.

The dust cover has been extended to meet the end of the slide and SIG’s proprietary rail system has been replaced with the more real-world-friendly Picatinny rail. Adding to the new grip module is the ability to select between one of three included backstraps (or don’t use one at all if you’re really kooky).

The compensation solution is an interesting one. The biggest problem with the current industry norm of threading a device onto the end of the barrel is that it adds weight with the most leverage possible to counter the way the barrel needs to move in order to properly cycle. The result is often a gun that becomes a picky eater. Of course that counter weight at the end of the muzzle is also a source of the “compensation” shooters feel.

I’m convinced that some of the compensation could more easily be replicated by using an old YouTuber hack: simply mount a big flashlight or weight to the rail of the gun. Adding weight out front counters muzzle flip nicely and both the gun and the shooter look cooler and the gun shoots flatter.

Avoiding ammo sensitivity and reducing total weight, the P365 XMACRO instead uses the 3.1″ barrel from the P365 in a slide length usually used for a 3.7″ barrel. The compensation ports are then cut into the slide itself.

The only drawback I see to this design is it means your slide is sized like a P365 XL…but the muzzle energy and projectile performance is reduced to that of a P365.

I know most consumers don’t think about the fact that the majority of 9mm ammunition is formulated to perform best from a 4″ barrel, and maybe it really doesn’t matter much. I have yet to find a test subject willing to be shot with the same ammunition from a 4″ barrel and a 3.1″ barrel and then testify which round did the most damage. There are also a few loads out there, some made by SIG, with thinner jackets and other tricks to maximize performance from a sub 4-inch barrel.

We hit the range with two shooters to get a feel for the P365 XMACRO and conduct our standard battery of experiences including filming our absolute first shots, testing the new magazine’s ability to run full-mag +1, trying out ten different loads from 90gr up to 165gr, a trigger control exercise, some practical accuracy, and lastly to give concluding thoughts.

The results can be seen in the video below. . .

One thing we didn’t test on camera for that video, but will include in a future video is how the frame feels with a regular (uncompensated) 365XL slide. We did this briefly as the sun was setting off camera and were both impressed with how much the compensator really changes the feel of the gun.

While testing the gun as-is, it simply felt like a pleasant-shooting pistol. So much so that we almost forgot this gun is still part of a “micro compact” family of guns…known more for being compact, not necessarily enjoyable at the range.

We also want to test a few rounds to see just how much energy is lost by going with a 3.1″ barrel. It’s long been my personal preference to carry a pistol with at least a 4″ barrel.

On the range the P365 XMACRO was an overall joy to shoot. Reduced-energy aside, it seems that with this build, SIG has created a modular do-all kind of gun with the grip and capacity to serve as a viable home defense option, be pleasant enough to use in training.

I know most folks carry a small subcompact or micro-compact gun, but take a larger gun to training courses IF they even train at all). The P365 XMACRO is comfortable enough for training while still still slim enough to use as a carry gun.

Yes the grip is a touch longer than a P365 XL with a 15-round magazine, but because the length is made up of more rounded grip instead of a boxy protruding magazine, I suspect it will conceal better by printing less obviously.

Reliability * * * * *
Not a single malfunction with any of the eleven types of ammunition used.

Ergonomics * * * * *
Somehow this thin pistol fit both my XXL-glove hands and Teya’s M-glove hands just fine. Three included backstraps allow for some change, but we both found the large backstrap to be the most comfortable.

Accuracy * * * * *
Once you learn to punch through the carry-grade trigger it’s easy to put shots where you want them.

Concealability * * * *
The longer grip likely conceals better for those who appendix carry than those who carry strong side, rounded corners of the grip will print less than a P365 XL with a 15-round magazine.

Overall: * * * * 1/2
This is an excellent little pistol. I don’t have any criticisms that aren’t already accepted when selecting this pistol. I believe the SIG P365 XMACRO can become the new replacement for the older “compact” (4″ 15-rd 9mm) concept and offers more comfortable carry and higher capacity.