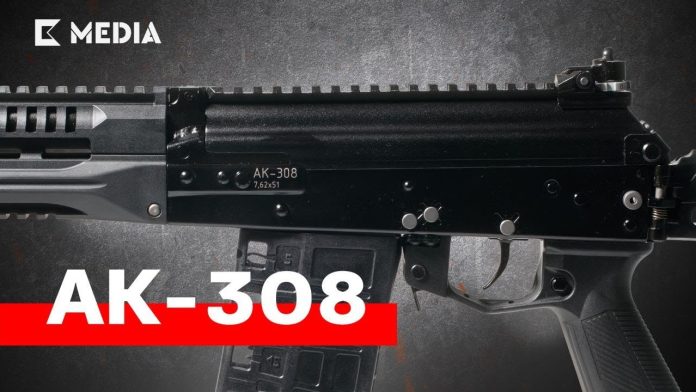 During the ARMY 2022 exhibition, Kalashnikov Concern unveiled a number of new firearms, both for the military/LE and civilian markets. Among the new guns are two rifles chambered in 7.62x51mm NATO / .308 Winchester – the AKV-721 and AK-308. Let’s take a look at each of these new firearms.

AKV-721 is the bigger version of Kalashnikov Concern’s AKV-521 rifle. Although they use a lot of AK parts, what sets the AKV series of rifles apart from regular AKs is the receiver layout – the AKV rifles have upper and lower receivers. Like in the ARs, such receiver design allows having a rigid top optics rail and changing calibers and configurations in a matter of swapping the uppers. Compared to the intermediate-caliber AKV-521 which has a stamped steel upper receiver, the AKV-721 has a milled upper. The AKV-721 also features an ambidextrous safety selector lever and charging handle. The barrel length is 415mm (16.35″).

The AKV series of rifles are designed by Valentin Vlasenko, the Director of Civilian Firearms R&D at Kalashnikov Group and the owner of Sureshot Armament Group. Vlasenko is what V stands for in the model names.

Kalashnikov Concern has first introduced the prototype of the AK-308 back in 2018 and they currently sell its civilian version called Saiga-308. At ARMY 2022, they revealed the latest iteration of the AK-308 which now has features borrowed from AK-12 rifles – the furniture, magazine design, top rail, pistol grip/trigger guard/mag release unit, etc.

During this week, we’ll take a look at the most interesting new Kalashnikov Concern firearms as well as guns released by other companies exhibiting at ARMY 2022. Stay tuned!

Pictures by Kalashnikov Concern and a TFB contributor

Fire Prevention in Your Home

Today we looks at various viral threats on the horizon.