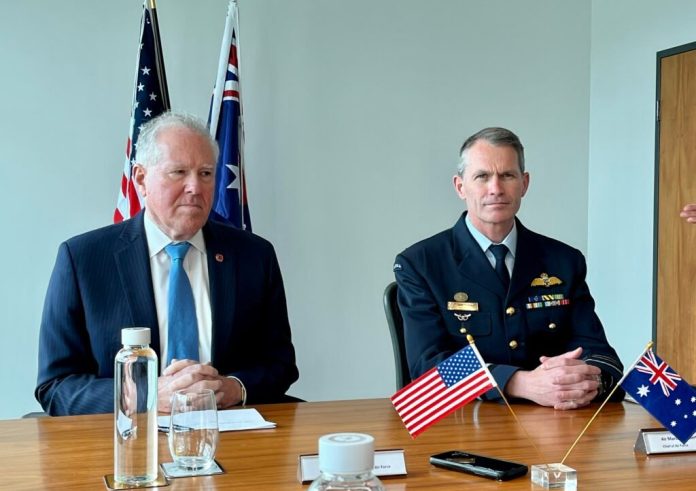 The Australian Loyal Wingman drone was named Ghost Bat at this ceremony at RAAF Base Amberley. (Credit: Colin Clark)

SYDNEY — In his first public remarks since becoming head of the Royal Australian Air Force, Air Marshall Robert Chipman said pointedly that his pilots would keep flying over the South China Sea in the face of “unsafe” operations by Chinese pilots.

Recent encounters with the Chinese “have been robust, to say the least, and to make a finer point, they’ve been unsafe,” Chipman said at an event hosting US Air Force Secretary Frank Kendall. The poster child was a May 26 move by a Chinese fighter, in which the pilot flew across the front of an Australian P-8 and released chaff. “The J-16 then accelerated and cut across the nose of the P-8, settling in front of the P-8 at a very close distance,” Defense Minister Richard Marles said in early June.

Chipman’s comments may well raise China’s ire since he made it clear Australia will not back down. “We think that China has a formidable aerospace capability, and they have concentrated that aerospace capability in the South China Sea region to deter others from going into that airspace,” he said. “It doesn’t make it impenetrable, and it doesn’t mean you can’t deliver military effects to achieve your interests when you are operating against China. So I don’t think to that extent it’s an exclusive area to us.”

China has been expanding its arguments and actions recently, claiming the entire Taiwan Strait is no longer international waters. And on Aug. 14, for example, Chinese customs officials seized almost 25,000 maps that did not show the notorious 9-Dash-Line and did not indicate Chinese spurious claims to the South and East China seas. A UN tribunal ruled in 2016 that those Chinese claims lacked precedent and violated the 2012 Law of the Sea Treaty. Since then China has simply said it doesn’t recognize the ruling and will do what it wants. Chipman’s comments make it clear Australia will not stand idly by.

At the event, US Air Force Secretary Frank Kendall described China “as formidable a strategic opponent as I have seen, and I spent 20 years as a Cold Warrior.” Kendall is in the midst of a rare trip for an Air Force secretary through the Pacific theater to Guam, Australia, Japan and Alaska.

The looming China threat is clearly driving the increasingly close military cooperation between Australia and the United States, as best exemplified by the AUKUS agreement to cooperate on the building of nuclear-powered attack submarines, hypersonics, cyber capabilities and a host of other advanced technologies.

To that end, Kendall told Breaking Defense that the US and Australia are “having preliminary discussions” about buying the Australian-made MQ-28 Ghost Bat drone, better known as the Loyal Wingman, to pair with the Next Generation Air Dominance (NGAD) Fighter.

“I’m talking to my Australian counterparts in general about the NGAD family of systems and how they might be able to participate,” Kendall said. The MQ-28 could serve “as a risk reduction mechanism” for NGAD’s drone capability. “I think there’s a lot of mutual interest in working together. And we’re gonna be sorting out the details over the next few weeks.”

Interestingly, Kendall also said they might be looking at “a derivative” of the Loyal Wingman aircraft, which Boeing builds. As far as we know there isn’t a derivative of the drone planned yet. The Ghost Bat was the first aircraft designed and built in Australia in half a century.

Chipman added that his “interest is in accelerating the program, and that’s really why working closely with our allies is is so useful — because we can operationalize it and bring it into service more quickly.” And, of course, producing larger numbers will bring down the unit cost and utilize economies of scale. Australia plans to spend roughly $600 million AUD on the Ghost Bat program, having increased the budget by $454 million in May to buy an additional seven drones. If America were to buy some, the unit price would probably dip substantially.