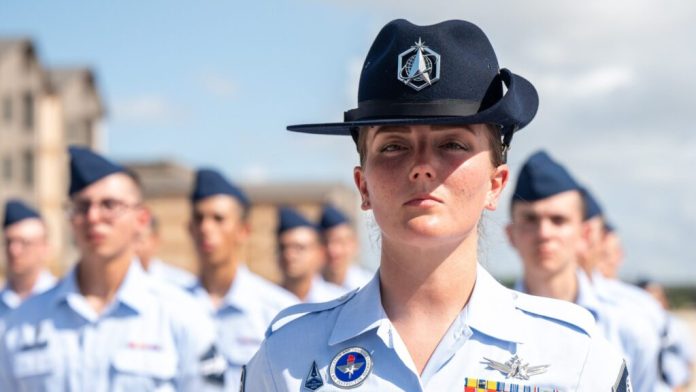 On June 22, 2022, a traditional ceremony marked a milestone, as the first Basic Military Training flights made up of Guardians and instructed by Guardians were recognized ahead of their June 23 graduation at Joint Base San Antonio. (Credit: STARCOM Twitter page)

WASHINGTON — The Texas congressional delegation is petitioning Air Force Secretary Frank Kendall to reconsider the department’s decision to limit candidate locations for Space Training and Readiness Command (STARCOM) to the six states already home to a Space Force base, thus eliminating Texas and 46 other states from the competition.

All 36 Longhorn lawmakers — 24 Republicans and 12 Democrats — signed an Aug. 12 letter [PDF] to Kendall, spearheaded by Rep. Brian Babin, asking that the contest be reopened and arguing the merits of Texas as a location for the training command.

“We request that you expand the possible locations for basing STARCOM so Texas can compete as a basing location for STARCOM,” the letter states.

The lawmakers note that the state is home to the largest joint base in the country, Joint Base San Antonio, which in turn houses Air Education and Training Command where Airmen and Guardians currently receive basic training. Further, they stress that Texas already has a large space-focused work force that includes personnel at: NASA’s Johnson Space Center in Houston, the Houston and Midland spaceports, and the SpaceX launch facility in Boca Chica.

Babin’s office did not respond to a request for comment today by press time.

However, according to a representative of a Houston nonprofit supporting the congressional move, the Texas lawmakers are rallying for all 50 states to have a shot at STARCOM.

“Through discussions with congressional offices, they believe other states should be able to bid even if they don’t have an existing military base,” James Adams of TexSpace, a nonprofit managed by the Bay Area Houston Economic Partnership, told Breaking Defense in an email.

In a press release today, TexSpace expressed support for the lawmaker’s call, and noted the potential two-way benefits of a state home for the training command. 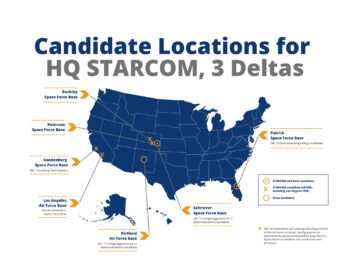 “USSF is rapidly growing, and STARCOM has five deltas with 800 Active-Duty Guardians and an estimated $297MM 2022 budget. STARCOM’s relocation to Texas, which does not have an existing Space Force Base, would increase the diversity of US congressional districts representing the Guardians and their families while accelerating civil, commercial, and military space innovation for the nation,” the press release argued.

Space Force made its announcement about STARCOM candidate bases April 4, saying that site assessment would begin in in late April or early May. The bases are: Los Angeles Air Force Base, Calif. (will be renamed a Space Force Base in the future), Vandenberg SFB, Calif., Buckley SFB, Colo., Schriever SFB, Colo., Peterson SFB, Colo.,and Patrick SFB, Fla. STARCOM currently is operating out of a “transitional location” in Colorado Springs, according to the Space Force website.

The announcement also explained that STARCOM is at the same time considering where to base four of its five Deltas: Delta 11 – Range and Aggressor; Delta 12 – Test and Evaluation; and Delta 13 – Education.

“The Secretary of the Air Force will respond to the letter from members of the Texas delegation, Senate and Congress regarding U.S. Space Force basing,” a spokesperson for the Air Force told Breaking Defense in an email.

The STARCOM headquarters is the second space-related basing decision to raise congressional concerns, with Kendall also facing the bigger, and more controversial, question of whether to overturn the Trump administration’s choice of Huntsville, Ala. to house Space Command following cries of political foul play from the Colorado delegation.

The 7 Best Improvised Self Defense Weapons You Can Take Anywhere

Raytheon Technologies to Move HQ from Massachusetts to Northern Virginia