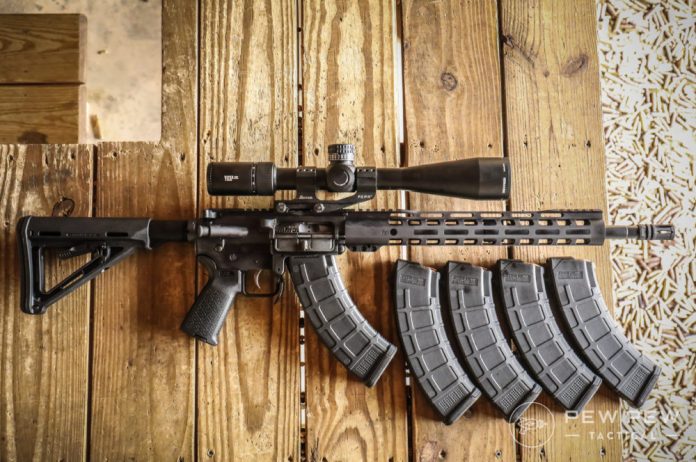 Let’s start with why 7.62×39 is awesome before diving into the best uppers and complete rifles out there.

7.62×39 is still one of the most popular cartridges around the world.

It was originally designed by the Soviet Union in the latter months of WWII.

The Soviets wanted an intermediate cartridge that could function in a multi-purpose capacity. What they got was a solid little round that would be on par with the 5.56×45 NATO rounds the West would use much later.

The new cartridge would go on to achieve wide acclaim for its success in close-quarters combat thanks to its relatively large bullet size.

This puts it nearly on par with the modern .300 Blackout round. Indeed the .300BLK was designed to mimic the performance of the 7.62x39mm round in many ways, but in a package that could be chambered by the AR-15 with minimal adjustment.

What Does This All Mean?

So, here’s the takeaway from the bare-bones look at the specs.

So, what’s that actually mean?

From a practical standpoint, the 7.62×39 round carries more energy into its target within 300-meters or so. But outside of that, its energy falls off and the heavy round drops quickly.

The 5.56×45, meanwhile, is not as good on the stopping power front at close ranges. However, its lighter bullet moves quite a bit faster, so after about 300-yards or so, you’ll get more energy out of it than the 7.62×39.

Let’s break that down further.

It carries more energy and is plenty accurate at those ranges. If you’re going after smaller game, or are looking to make shots at 400+ yards, the extra accuracy and velocity of the 5.56×45 will help.

No need to invest in a new upper if that’s the case.

Now, if you’re looking for something with a little more close-up power, or you just want something else to add to the collection, you might want to snag a new 7.62×39 upper for your rifle or build a 7.62×39 rifle from the ground up.

If that sounds like something you want to do, here’s what we recommend for your new East-meets-West rifle!

All of the options before were great options, but the best of the batch might be the PSA KS-47.

Delivering a complete rifle for a fraction of the cost that the CMMG runs, the PSA KS-47 is also outstandingly accurate.

Shooting roughly 2.5 MOA, the KS-47 delivered perfect function and reliability. Impressive for a gun that runs about the price of most decent standard AR-15s.

The KS-47 uses standard AK-47 magazines rather than the steeply curved magazines meant for standard AR-15 lowers. Having a lower that accepts AK magazines helps ensure better feeding and reliability with the 7.62×39 round.

Another perk is that PSA offers it in several configurations, including a braced pistol version with a 10.5-inch barrel! The only major downside is the lack of last-round bolt hold open (thanks, AK mags).

If you want a complete rifle option, you can’t go wrong with PSA.

See our full written review for even more details and a video below!

What’s your take on the KS-47? Let us know by leaving a rating below.

If you’re looking for a firearm that’s basic but functional, PSA has you covered with an A2-style upper in 7.62×39.

The barrel is a 16-inch chrome moly vanadium piece with a 1:10 twist, and it’s set up for a carbine-length gas system. PSA’s PA47’s barrel is a combination front sight base/gas block and is capped off with an A2-style flash hider.

The upper is forged 7075-T6 aluminum and then finished with a hard-anodized coating to keep it free of scratches and rust.

I’d call this upper the way to go if you’re looking for a basic 7.62×39 upper that is more about function than form. It’s finished well and machined precisely, but it’s pretty plain Jane and doesn’t offer much in the way of customization options by default.

What if “adequate” doesn’t quite get the job done, though? What if you need those flashlights, lasers, foregrips, PEQ boxes, and coffee grinders? What if you just hate the A2 stylings the upper above?

Well, PSA has still got you covered.

Their AR-47 16-inch is an M-LOK railed version of the PA47, and it’s perfect if you’re looking for a bit of an upgrade over the base model.

You get a mid-length gas system and a low-profile gas block to accommodate the free-floating, 13.5-inch lightened M-LOK rail. It sports M-LOK cuts at the 3, 6, and 9 positions and a full-length rail up top. The rail also features QD mounts for a sling if you so desire.

I love the customization options, and PSA has put some serious thought into this upper, from manufacturing to distribution.

If you’re looking for something a little different, the Radical Firearms HBAR upper may be the way to go.

The HBAR-profile barrel is fitted with M4 feed ramps and is rifled at a faster 1:8 twist to get more accuracy from heavier bullets.

It is available with M-LOK, Keymod, or Picatinny Quad Rails, so you can pick your poison here when it comes to mounting accessories.

However, this upper doesn’t come with a BCG or charging handle — so take that into account when budgeting. You’ll want to get a dedicated 7.62×39 BCG and any standard AR-15 charging handle.

If you’re looking for a complete rifle option, the CMMG Mk47 series has you covered. From full-length models to pistols, the Mk47 offers plenty of options when it comes to complete builds.

Using the AR standard direct impingement gas system and AK magazines, the series truly is just a combination of an AK-47 and AR-15.

Best of all, it is made to CMMG’s exacting standards for quality.

While the 7.62x39mm round is not a marksman cartridge, you can count on CMMG to deliver a rifle that will help maximize your precision.

Check out our full review on the CMMG Mk47 Banshee, or watch the video below.

The Faxon ARAK-21 complete upper option comes in a piston flavor…complete with gas adjustment, so you’re ready for whatever kind of ammo you might be shooting.

It’s built a bit different from a standard AR-15 upper, so some parts aren’t interchangeable. BUT…it does work on a regular lower.

It’s a bit heavy with integral quad rails, but if you want to go with a piston system like the AK…the ARAK-21 might be for you.

If you’re interested in 7.62×39 and already have an AR-15, you’ll be pleased to know there are some great uppers out there that will allow you to take advantage of this legendary caliber’s benefits without building a whole new gun.

Whatever you decide to do, these uppers won’t let you down.

Got another one I should add to the list? Do you think this whole thing is blasphemous and an insult to both Stoner and Kalashnikov? And don’t forget to check out the Best AR-15s and Best AK-47s!

“…may be made manifest, that they are wrought in God.”