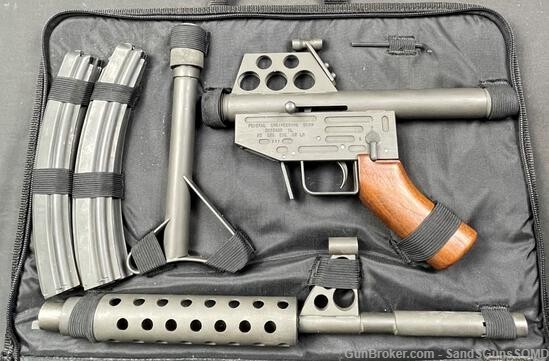 Welcome everyone to the 156th edition of ‘Hot Gat or Fudd Crap?’, one of our many series here on TFB. If you’re new to the series, this is where we look at the most obscure firearms that are actually for sale and ask the question – is this Gat a sweet deal or only has a Fudd appeal?  Each week the TFB staff weighs in with their thoughts, but readers get the final say in the poll at the bottom of each article.

In our last edition, our poll showed that you, the readers, by the narrowest of margins decided the rising sun-themed Glock 43X was a hot gat. At this time the original auction remains up with this Japanese-themed gat still up for grabs.  We hope someone can find it in their heart to adopt a narrowly certified hot gat.

Let’s see what the Staff had to say about this week’s offering:

“Yes, making things out of sheet steel is not a good look, but when you poke random swiss cheese holes into it the aesthetic is somehow not improved.” – Hop

“If you take it apart there’s no reason to ever put it back together again” – Eric B.

“Or for that price you could buy several 10/22s that don’t look like a schizophrenically cobbled-together pipe gun from Fallout.” – Will P.

“Would rather wear a shirt with a picture of Mohammed in downtown Tehran than own this gun.” – Pete Selling this very unique gat is GunBroker seller SandSGunsSOMD, located in Huntingtown MD.  Let’s see what they had to say about this retro takedown rifle. This rifle is a mixture of strange, cool, and just straight-up bizarre.  Based on the information I was able to gather, these were made in various calibers including 9mm, .45ACP, and of course, the .22LR during the 1980s.  Once you look at it like an 80s gun, some of the aesthetics start to make sense. The front of the rifle looks like it drew inspiration from the Colt Commando, while the back half features a Valmet-esque stock that screws into the rear.  All of this paired with a very interesting angled pistol grip makes for a very curious-looking rifle. A quick glance at the safety and trigger makes this look like an AR-15 crossed with a Sten submachine gun.  It’s confusing to look at, and oddly fascinating at the same time.  Some of the features make sense, while others like the rear peep sight are just bizarre.

Certainly, this is a very interesting piece of history, and probably a valuable one.  But is this worth the $1,700 asking price?  As always, I leave it up to you, the readers, to decide.