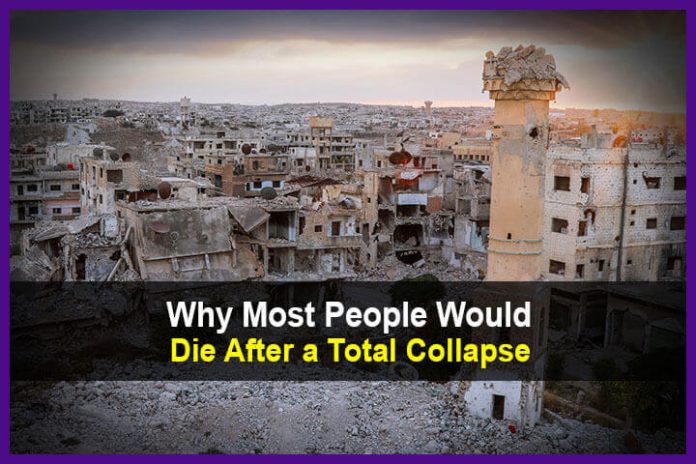 You don’t have to be a prepper to know that all disasters are not created equal; just look at the last couple of years. COVID impacted the entire globe. In comparison, other “smaller” disasters might have had a huge impact locally, but were limited to smaller areas.

The war in Ukraine has really only impacted a very small percent of the world’s population, but it has captured the attention of almost everyone, as a possible portent of what is to come.

While wars are horrible, perhaps even more destruction can be caused by a total collapse of civilization. There are many such scenarios that exist, including conventional war, nuclear war, and an attack by an EMP; even a CME from the sun could being us to that point.

Granted, we shouldn’t assume that any and every major disaster will result in a collapse of society, but we should be aware of the possibility. When enough people die in enough critical positions, things stop working properly.

Some of those things include our government and government services like the police, fire, and rescue. When that happens, we start seeing society collapse. Perhaps even more importantly, we see law and order collapse.

Regardless of what happens to the government in any of these scenarios, they all have one thing in common: the collapse of the infrastructure and supply chain that we are so dependent on. We wouldn’t have fresh clean water piped directly into our homes, electric power at the flip of a switch, or any of a thousand products that we use every day.

If we’re talking about only a few days, most people will probably be okay. The average American family has about three days’ worth of food on hand and usually a couple cases of bottled water. Our homes will hold in some heat, keeping them from getting freezing cold for a day or two. But what then?

The truth is, modern society has been trained to be dependent on our infrastructure and supply chain. It’s not like anyone has intentionally trained us that way. I’m not talking conspiracy theory here. But we are raised with all our technology, our conveniences, our infrastructure, and the ability to run to our choice of stores to buy whatever we can afford.

We don’t know any other system and the younger we are, the more dependent we are on that system.

As part of that “training,” the average person no longer knows how to do the most basic survival tasks. They don’t know where to find water, how to purify it, where to find food (other than in the grocery store and restaurants), how to cook food without power, or even how to start a fire.

Even if they were given the tools that our ancestors used before everything became electrified, they wouldn’t know how to use them.

This leaves anyone who is not a prepper very vulnerable to a collapse of society. Most don’t even know what their survival priorities are, let alone how to come up with them on their own.

If you ask the average person on the street what those priorities are, they’ll probably tell you their cell phone, keys and credit card, not even understanding the question. One or two might come up with “food, clothing and shelter,” without understanding why, other than they had heard that somewhere.

While they will all come to a recognition of those priorities, that won’t happen until they become desperate.

Most Likely Group to Die First

The first thing that will cause people to die won’t be lack of food or water, it will be a lack of medicine. More than 131 million Americans take prescription drugs for chronic conditions. While some of those people could actually survive just fine without those drugs, there are also many who can’t.

Even those who can survive without them for a while, like people with high blood pressure, would very likely end up in serious trouble due to the combination of their underlying health and the stress of the situation.

The Next Killer We’ll Encounter

Water will quickly become a problem, as people run out of the bottles they have saved up. Most will look around them, trying to find whatever water they can. But many will drink that water without first purifying it, either because they don’t have the knowhow or don’t have the tools to use.

Sadly, there is some bad advice around, telling people things like they can filter their water through a T-shirt or other piece of cloth. That sort of advice can get people killed.

Yes, that T-shirt will remove some sediment from the water; but it’s not going to do anything about removing the microscopic pathogens that we really need removed. People will get dysentery from drinking that unpurified water and die of dehydration.

Those that don’t drink whatever water they can find won’t end up much better off. The human body is largely made of water, trapped in each and every cell. We can only live three to five days without water. If our bodies don’t receive sufficient water, those cells die.

As that process cascades, it can lead to the shutdown of entire organs and systems, leading to death.

Starving to Death isn’t Next

It would seem that the next likely problem people will face is starvation, but it probably isn’t. While food is important, we can actually survive for some time without it.

We’ll be hungry, along with a loss of energy and probably some loss of mental clarity after the first two weeks; but we won’t be in danger of dying of starvation that quickly. Most of us carry around too many reserves stored in our body’s fat for that to be an issue.

No, the next issue will be all those people out there who are hungry. The ones who take the hunger in their bellies and follow it, rather than following reason. Those people will start doing whatever they can to get food, even if that means crossing the line into crime.

Before starvation can begin to set in, those people will be out there with whatever weapons they can get their hands on, doing whatever they have to do in order to get food. Some of them will be even more motivated because their children are hungry; and there’s nothing that can make a parent more desperate than their child crying because they are hungry.

Many will die at the hands of those people before they end up reaching their own demise. That will probably come at the hands of someone who is better armed or better prepared then they are.

Before the First Few Weeks are Out

Disease always follows in the wake of disaster. I already mentioned those who will die from drinking contaminated water, but there will likely be a wave of people who die of disease that spreads through society, quite possibly through contaminated water supplies. One of the oldest known disease spreaders is water that becomes contaminate by people who are already infected by disease.

Without proper sewage service, it is easy for human waste, one of the most toxic substances on the face of the earth, to contaminate ground water and to become spread from person to person. You remember how much propaganda there was about washing hands during the COVID pandemic; that wasn’t false information.

Diseases, even deadly diseases, spread quickly via person-to-person contact. When there isn’t adequate water for cleaning, it allows them to spread faster.

Finally, people will start dying of starvation. It’s hard to say just how quickly that will start as there are many factors involved. The national obesity rate may help slow death by starvation, but fat cells don’t store nutrients, just energy. People can be fat and still die of starvation.

There are too many people who think they can live off the land, hunting, fishing, and gathering. But the reality is, no matter how good you are at those things, there will be too many people trying to survive that way. It won’t take long for the game to play out and the fish to become scarce. When that happens, most of those people won’t have a Plan B.

The starvation wave will probably start in about a month or so and will continue for the better part of a year. By then, those who survive will have figured out how to grow their own food. Either through community effort or their own, they will have enough food, water, and firewood to survive, even if they don’t have enough to thrive.

How to Avoid Becoming a Statistic

This is what prepping is all about: becoming self-sufficient so we don’t need to depend on the infrastructure and supply chain. That’s the only true way that we can be sure that we will survive.

But these sorts of scenarios actually go far beyond just stockpiling food and water, as we’re talking about events that will destroy the very fabric of our nation. It’s not just survival for six months or a year; it’s not waiting for someone to rescue us; it’s being able to take care of ourselves the rest of our lives.

I don’t care how big a stockpile you build; it won’t feed you the rest of your life. There was a family on “Doomsday Preppers” who were preparing a ten-year stockpile, but they had no plan after that. Their survival retreat wasn’t someplace where they could grow food. In the kind of situation we’re talking about, they’d survive longer than most; but they would still die.

Getting to this point means developing a homestead; whether that’s a homestead out in the country, an urban homestead in suburbia or a commune-styled homestead on property purchased by your survival team. Homesteading is all about self-sufficiency; and building that homestead is the only insurance you can get.