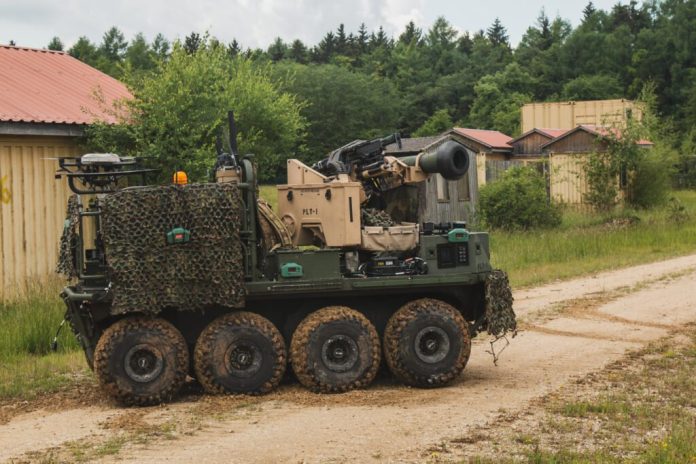 WASHINGTON — An incoming air assault surprises a fleet of attack helicopters, still waiting on the ground, and sends them scrambling to take off to intercept the inbound force. But suddenly plumes of smoke obscure the airfield, preventing the helicopters from taking off and mounting any kind of defense.

In the ensuing chaos, a key question is left unanswered: Before attack helos got within striking distance, where did the smoke come from?

The answer, at least in the case of an international military exercise in June, was that it came from an “enemy” robotic ground vehicle that managed to sneak behind friendly lines with smoke canisters in tow. The point of the exercise involving the Army’s Project Origin autonomy demonstrator at the Joint Multinational Readiness Center in Germany was to hammer home to the US and allies the danger posed by robotic autonomous systems (RAS) and to help the military think about how to fight against them.

“We need to develop a counter-RAS doctrine because our adversaries are doing the same thing,” said Maj. Cory Wallace, the robotic combat vehicle requirements lead for the Next Generation Combat Vehicle Cross-Functional Team. “If [the Project Origin team was] able to achieve the level of success that they did at JMRC, it’s reasonable to assume that we start figuring out how to defeat these systems.”

The Project Origin unmanned ground vehicle, managed by the Ground Vehicle Systems Center (GVSC) out of the Army’s Combat Capabilities Development Command, is being used by the service to inform the requirements for its robotic combat vehicle modernization program. The Army’s RCV program is among its top 35 modernization priorities. At the end of this month, the platform will take part in an exercise to validate its systems ahead of the upcoming Project Convergence exercise in the fall, according to Todd Willert, program manager for Project Origin.

But beyond informing how the US military should use robotic vehicles, it’s also providing harsh lessons in how to defend against them. The idea is particularly relevant given Russia’s investment in a robotic combat vehicle, called the Uran-9, which it reportedly planned to complete large-scale testing of this year. What US Army leaders don’t want is for a battlefield engagement with a robot to be the first time a coalition force sees one, Willert said.

During the event at JMRC, the Project Origin vehicle was integrated into both the rotational force made up of NATO allies and the “opposition” force made up of US troops. The Project Origin vehicle has participated in other operational events in the last year, including integration into the opposing force at Joint Readiness Training Center in November, in addition to fighting alongside Green Berets in Utah in May.

The breadth of payloads the robotic vehicle can carry on the battlefield provides commanders with range of options that they can deploy quicker than the current operations, Wallace said. Traditionally, he said, if a unit wants a particular capability, such as counter-unmanned aerial system, electronic warfare or smoke, they have to request it from higher headquarters and wait. With a robotic vehicle integrated into the formation, the commanders can use those advanced capabilities more quickly, which increases the pace of operations. The robot can also be equipped with a system to launch Javelin missiles, the Common Remotely Operated Weapon Station-Javelin.

Ultimately, the capabilities are “instantaneously available at the point of need,” Wallace said.

During the event in Germany, the Project Origin vehicle was used more aggressively than before. In the previous exercises, Willert noted, it simply engaged the forward line of troops. But at JMRC, the vehicle was “skirting around” the forward line and disrupting the command and control elements in the middle of formations, as well as logistics support lines further back from the frontline, such as the forward area refueling point that the unmanned vehicle hit with smoke.

“Each of those have very, very valuable learning points [about] where you can put robotics systems and determining where and how to employ them,” Willert said. “And what we found was we were equally effective through each of those areas. And it’s something we hadn’t done before.”

Wallace said part of the vehicle’s value is that it “creates multiple dilemmas for the enemy.”

“It provides them more problems than they can reasonably solve in a short timeline,” he said. “By the time they react to the threat … the force with robotic and autonomous systems have already seized the momentum. They are further ahead in the decision cycle than what the enemy force is trying to react to. That was a substantial learning point from this experiment.”

In earlier exercises the force-on-force training exercise at Fort Polk, the robot blocked intersections, denied helicopter landing zones and drove route recon missions. During the experiment with Green Berets, it was used to make initial contact with the enemy.

As the Army and its partners grapple with the outcomes of the JMRC event, Project Origin will continue its work informing the Army’s Robotic Combat Vehicle program. Willert said that Project Origin will now prepare for Project Convergence 2022, coming up in the fall. The GVSC team is also completing “hundreds of miles” of autonomy testing, though it will be broken up into several legs.

“We’re going to push the limits of the autonomy to see where our warts are and what it is we need to improve,” Willert said.

1780, the treatment of prisoners by British: “Tarleton’s Quarter.”