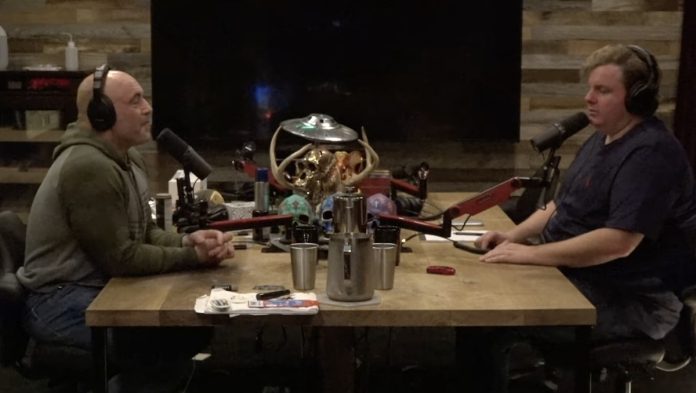 During an episode of the “Joe Rogan Experience” with guest Tim Dillon, Rogan pointed out how the industry exudes a guns-for-me-but-not-for-thee mentality.

“Isn’t it f–king wild that Hollywood, in general, is very anti-gun, but they promote guns more than any other media on the planet?  All their best movies, whether it’s ‘The Gray Man,’ or whether you’re watching ‘The Terminal List’ or ‘Mission Impossible,” Rogan said.

“It’s all ‘Guns save the day.’ Guns kill aliens, guns kill werewolves, guns kill everyone. Everyone bad gets killed by guns,” Rogan continued. “‘But guns are bad and you shouldn’t have guns.’ It’s crazy.”

Rogan is 100 percent correct. The majority of Hollywood elites don’t believe Joe Public should have 2A rights.

Yet, they have no problem profiting off of depictions of guns on the silver screen.

The virtue-signalers in Tinseltown love to demonize the National Rifle Association and its five million members for the violence in America. Which is absurd, as the NRA is all about promoting responsible gun ownership!

Yet, these actors, directors, and writers take no responsibility for the gratuitous violence they propagate.

you should probably watch the case like this person did. pic.twitter.com/vSYR2dXson

As another comedian Bill Maher noted recently on his show “Real Time with Bill Maher” on HBO, the average American youngster “sees 200,000 acts of violence on screens before the age of 18.”

Maher goes on to say that, according to the FBI, one of the signs of a school shooter is a “fascination with violence-filled entertainment.”

“It’s funny, Hollywood is the wokest place on earth in every other area of social responsibility… but when it comes to the unbridled romanticization of gun violence — crickets,” observed Maher.

While it’s highly unlikely that filmmakers and TV producers and actors will make any changes or accept any responsibility, it’s nice to see that high-profile individuals, like Maher and Rogan, are waking up to and calling out Hollywood’s hypocrisy on gun ownership — something we’ve all been doing for years.

Portland art event lets black people in for free, charges everyone else $80

Tell Everyone How to Measure Cyber Risk, DOD Begs NIST