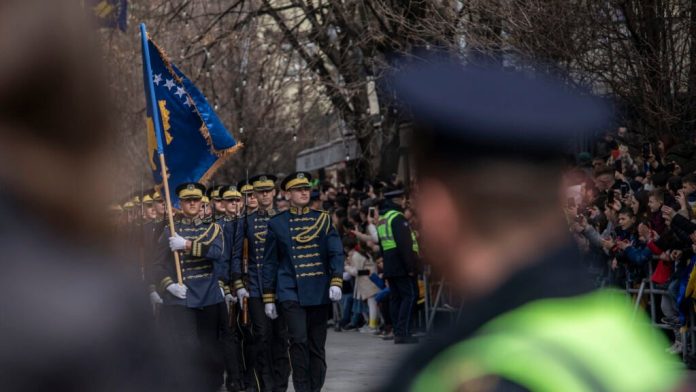 Members of the National Guard of Kosovo Army march during the military parade on February 17, 2022 in Pristina, Kosovo. A decade after the 1998-99 war between ethnic Albanian rebels and Serbian forces, Kosovo declared independence from Serbia on February 17, 2008. (Photo by Ferdi Limani/Getty Images)

Trouble is brewing once again in the Balkans, where a return of tensions between Kosovo and Serbia could spiral into fresh fighting. But in the op-ed below, Jeffrey Fischer, who served as defense attache in Kosovo not long ago, explains why he thinks the current crisis will blow over, rather than blow up.

In January 2022, I traveled to Kosovo. Upon landing, one friend said, “You’re just in time, tomorrow, Serbia may be invading us.” He was serious, as there was an ongoing Kosovo-Serbia dispute about a pending Serbian election, but we both chuckled and got into his car. As a former US defense attaché there from 2016 to 2018, I’d learned that nearly every quarter, there is a “crisis de jour” in the Balkans.

Currently, many global media outlets are reporting about the potential for increased violence between Serbia and Kosovo. In this crisis, Kosovo’s Prime Minister, Albin Kurti, demanded ethnic Serbs across Kosovo transition to Kosovar official documents and license plates. This issue has been percolating for weeks and seems to have gained traction due to reported gunfire in the northern city of Mitrovice earlier this month.

While gunfire is disappointing, and recent mediation talks may have stalled, it’s worth remembering the Kosovo-Serbia relationship has long been tenuous and there are historical and practical reasons to be optimistic the current crisis will not spiral into widespread conflict.

Since the establishment of Kosovo as a recognized nation by the majority of UN countries in 2008, a few long-standing issues remain making it extremely difficult for the relationship to normalize. First, Kosovo is far from integrated geographically. Ethnicities are grouped regionally, disproportionately outnumbering each other. Second, there still is no border between Kosovo and Serbia, but rather an “Administrative Boundary Line” (ABL), causing lingering challenges. Third, the ethnic Serbian-dominated northern portion of Kosovo is quite lawless, and the criminals want it that way. In 2018, a political assassination took place in broad daylight in front of an office building. To date, no one has been convicted. Fourth, Serbian President Aleksander Vucic continues to meddle in Kosovo, for instance offering direct financial assistance to Kosovar Serbs, bypassing and undercutting Pristina. Fifth, NATO Kosovo Forces fatigue is ever increasing, now the longest standing NATO mission (started in 1999).

Lastly, and perhaps most important, is the never-ending provocations that both Serbian and Kosovo politicians wield towards each other. Much like the most recent escapade with license plates, conflict shenanigans continue. Most are not reported. During my two years in Kosovo, instances included: Vucic trying to send a propaganda train into Kosovo, uninvited. As mentioned earlier, there was also the 2018 political assassination of Oliver Ivanovic, an ethnic Serbian, moderate towards the Kosovars. Numerous attacks were waged against ethnic Serbians serving in the Kosovo Security Force, and threats were made against ethnic Serbian Kosovars who joined the force. Serbia, however, is far from the only culprit. Kosovo leadership is just as guilty. For years, the largest flag in Pristina has been the Albanian Flag, not the Kosovo flag, far from welcoming to other ethnicities in the nation. Additionally, the Serbian Orthodox Church’s Decani Monastery remains under the NATO-led peacekeeper Kosovo Force’s 24/7 guard, as attacks and threats against it remain.

For Americans, perhaps the most important thing to understand about Kosovo is the ethnic divisions. While many Kosovar Albanians love America (though not Americans), they seem to overlook the fundamental greatness of America is its melting pot construct. A hodgepodge of ethnicities, functioning under a singular flag and nation. But Serbians and Albanians generally hold a far greater passion for ethnicity over nationality. Geographically, Kosovo is just a piece of land. That makes the potential for conflict all the greater.

Given all this, though, there is reason to remain optimistic that the current escalation of violence will subside rather than explode into warfare. Vucic may be many things to many people, but one thing is clear, within Serbia: He is an impressive politician. He knows how to rally the populace, often inventing and leveraging a Kosovo crisis at the most politically beneficial time. Since Vucic’s first day in office, the badgering and harassing has never escalated to a full-blown conflict, and there have been many catalyst events for that to happen, should he have wanted it.

Serbia’s most geopolitically significant ally is Russia, which appears to be “all-in” on the Ukrainian war effort. It is possible that Vucic and Putin have discussed some sort of action in Kosovo, but it’s hard to imagine that Vucic could see any benefit at present. Here is why:

Therefore, optimistically, this most recent dust up between the two nations will go down in history as just another one of many that lead to nothing. It is good to see Kosovo leadership has delayed their efforts, as well as the meeting last week between Kosovo and Serbian leaders. However, those talks didn’t go very far, and outcome of this event is likely not great. If history repeats itself, the dialogue will devolve into little more than what diplomats call “a constructive step.” But still, with any hope, the next “crisis,” which is likely inevitable in three months, won’t make international news and will simply remain a daily issue for the residents of the Balkans.

Col. Jeffrey Fischer (ret.) had a long career in the Air Force, including serving as defense attache in Kosovo from 2016 to 2018. He is an author of military thrillers, with more information at jeffreyhfischer.com.

“…justice to protect it, anarchy and tyranny commence.” – John Adams