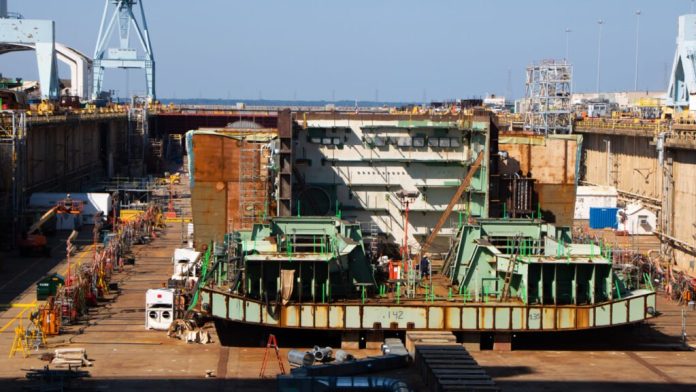 Part of the aft of the future USS Enterprise (CVN-80) being constructed inside the dry dock at HII’s Newport News Shipbuilding. (Justin Katz/Breaking Defense)

NEWPORT NEWS, Va. — As preparations here continue to lay the keel for the next Navy ship named the USS Enterprise, the Navy, its prime contractor HII and the industrial supply base have already begun crunching the numbers for a potential “block buy” for another two aircraft carriers.

The Enterprise (CVN-80) and the ship to follow it, the Doris Miller (CVN-81), were purchased by the Navy in a “block buy” agreement in late 2018. That phrase essentially means the service negotiated all the supplies and labor for both ships in a single agreement, resulting in what the Pentagon said was an estimated $4 billion in savings due to ordering in bulk and avoiding higher than anticipated inflation in recent years.

During a series of interviews today with Navy officials, executives from HII and representatives for the vast supply base necessary to build an aircraft carrier, everyone extolled the advantages of such a deal should the Navy decide to pursue another pair of Ford class ships, what would be CVN-82 and CVN-83.

“Think about what happened in the world over the last couple years with inflation,” said HII chief executive Chris Kastner. “We were able to place the vast majority of the orders for [CVN-81] before that inflation hit. It’s just smart buying by the Navy.”

The Enterprise and Doris Miller are the third and fourth Ford-class ships to be built, after the original Ford and the John F. Kennedy, and they will fulfill the original four-ship plan for the program. But, at least internally, the Navy is actively considering what additional buys may look like, as industry watches on with great interest.

Metcalf, the program manager, said the Navy has already provided the broader Pentagon with information about several scenarios, but is due to give lawmakers a definitive answer in fiscal 2023.

“The scenario that we believe is optimal is two ships, every eight years on four year centers,” he said. “With the advanced procurement funding, typically we’ve gotten two years. We’ve learned now that we probably need about three years… Lead times have gone up nationwide. If you order something, it takes a lot longer than it used to get here.”

In the context of buying aircraft carriers, the “centers” refer to the pace at which the ships are built. If two ships are bought on “four year centers,” then that means their scheduled milestones should line up in roughly four year intervals.

When the Navy and industry choose the center for their buys, they have to consider a gap that is long enough to allow for the ship’s construction schedule to not fall behind, while also small enough such that industry can keep its workforce busy.

Rick Giannini, chairman of an industrial base coalition focused on the aircraft carrier supply chain, told reporters here that the group in February surveyed 158 of its 2,000 member companies about potential centers.

As for when and how the final decision will be made, that is an issue for which Congress will get the last word. With the Pentagon expected to select one of the “scenarios” Metcalf mentioned next fiscal year, it will likely become a major issue once lawmakers begin drafting the defense spending bill for fiscal 2024.