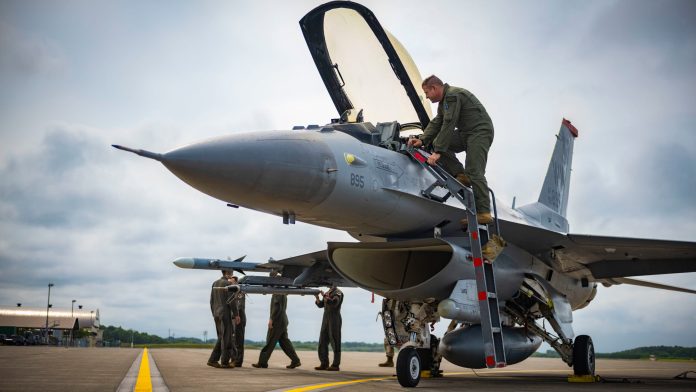 Each year the Pentagon spends billions of dollars upgrading older aircraft, buying new ones and developing super-secret next-generation capabilities. But in the op-ed below, FDD’s Bradley Bowman and Maj. Brian Leitzke argue that more needs to be done to ensure the Air Force has a steady supply of the most critical piece of the puzzle: pilots.

Beijing demonstrated its growing military strength this month as the People’s Liberation Army conducted large-scale air and naval exercises around Taiwan and even fired missiles over the island. Eyeing a possible conflict with China in the coming years, the US Air Force is trying to field next-generation aircraft in sufficient quantities to help deter aggression and achieve victory if deterrence fails.

The problem is that the service consistently struggles to retain enough aviators to fly those aircraft. In fact, the Total Air Force (Active, Guard, and Reserve) was short 1,650 pilots in 2021, and the shortfall will likely only get worse.

It’s a crisis that must be addressed head-on, both by training more pilots but more importantly by retaining a higher percentage of experienced pilots through flexible incentives offered to officers earlier in their careers.

Some might be tempted to dismiss recent warnings, pointing out that pilot shortages are not a new problem and that the Air Force actually shrank the pilot shortage by more than 14 percent from 2020 to 2021.

While that’s certainly true, and the Air Force deserves credit for years of work to address this challenge, we shouldn’t draw too much comfort from what was likely somewhat of an anomaly.

The reality is that last year’s reduction in the pilot shortfall was at least partially attributable to the COVID-19 pandemic, which resulted in commercial airline furloughs, reduced hiring and a weakened overall job market, including for Air Force pilots looking to transition to a variety of civilian jobs. That undoubtedly incentivized some pilots to remain in the service. But those dynamics are already changing.

Indeed, according to federal labor statistics, the US airline industry needs to hire 14,500 new pilots each year until 2030, yet the United States reportedly produces just 5,000 to 7,000 pilots annually.

That shortage will lead commercial airlines to offer more attractive offers to woo Air Force pilots into civilian cockpits. Those offers will undoubtedly seem tempting to some pilots whose active-duty service commitments are ending – mid-career officers who may be flying less or who are concerned about the impact of the military lifestyle on children who are getting older.

Well, there are basically two ways to effectively address the pilot shortage problem: produce more pilots and persuade more to stay in the service. An ideal solution, of course, should seek to do both.

But there are reasons to believe that the best opportunities to address the pilot shortage problem can be found in retention over production. Training new pilots and providing them with the experience that makes them more effective in combat are time- and resource-intensive.

Air Force undergraduate pilot training production was 1,381 in fiscal year 2021, up from 1,263 the previous year. But at that rate, assuming other variables remain constant, it would take more than a decade to address the current shortfall.

Plus, even if the service sends more pilots through training, it takes years for new aviators to gain the experience of the mid-career pilots who are leaving the service. In other words, increased production of pilots is part of a longer-term solution, but only part. Indeed, in a 2019 report to Congress [PDF], the Air Force admitted that training more new pilots cannot solve its pilot shortage.

Increasing the production of pilots is also more expensive than retaining aviators. “The cost of training a basic qualified fighter pilot ranges from $5.6 million for an F-16 pilot to $10.9 million for an F-22 pilot,” a team of researchers found in a 2019 RAND study. For that reason, as the study demonstrated, it is far more cost-efficient to offer seasoned aviators large retention bonuses than to train new pilots.

Recognizing the problem, the House and Senate armed services committees are advancing legislation designed to retain experienced Air Force pilots. In their respective versions of the National Defense Authorization Act for Fiscal Year 2023, both committees included language that would establish an “Air Force Rated Officer Retention Demonstration Program” for aviators willing to remain on active duty.

The program would give the Air Force the authority to offer more flexible retention incentives. That flexibility is critical since each aviator’s circumstances are different. As currently written, the program would enable the Air Force to guarantee future assignment locations for aviators willing to extend their service commitment.

That innovation might face resistance in some quarters of the Air Force. Yet it could yield significant retention benefits for pilots who want to fly and execute their meaningful missions but also have location-specific concerns related to spouse employment, resources for their children, or other considerations. Exit interviews suggest that lack of control over future assignments is often a top reason pilots leave the Air Force.

The program would also increase the maximum bonus the Air Force can offer to aviators. It may be especially effective to offer bonuses even earlier in a pilot’s career, as recommended in an October 2020 Center for Strategic and International Studies report. Even if a pilot’s initial active-duty commitment has not expired, the purpose of offering the bonus is to extend that commitment to help solve the shortage by maximizing retention.

Last year, just 36 percent of eligible pilots elected to accept bonuses and extend their service. That’s hundreds of pilots below what’s required to address the shortage. The Air Force could likely achieve a higher “take rate” by offering the benefits earlier to officers.

Early in their careers, pilots’ primary focus is flying, executing the exhilarating and meaningful no-fail mission they joined the Air Force to support. But they’re also just beginning to build a financial foundation, perhaps for a growing family. Bonuses would represent a more significant relative financial benefit for younger officers who are earning less and would enable them to take advantage of the investment benefits associated with receiving money sooner. They’d also appreciate the long-term predictability assignment guarantees would offer them and their families.

The bottom line is that Congress seems to recognize that these innovations, along with the flexibility to tailor them to a pilot’s circumstances, can potentially increase retention.

Offering increased retention incentives to US Air Force pilots earlier and providing the service with the flexibility to adjust those incentives over time, will help address a problem that threatens our national security and is likely to only get worse without urgent action.

Bradley Bowman is senior director of the Center on Military and Political Power at the Foundation for Defense of Democracies and a former US Army UH/VH/EH-60 pilot-in-command. Maj. Brian Leitzke is a US Air Force F-15E instructor pilot and visiting military analyst at FDD. The views expressed in this commentary are those of the authors and do not necessarily represent the views of the Defense Department or the Air Force.