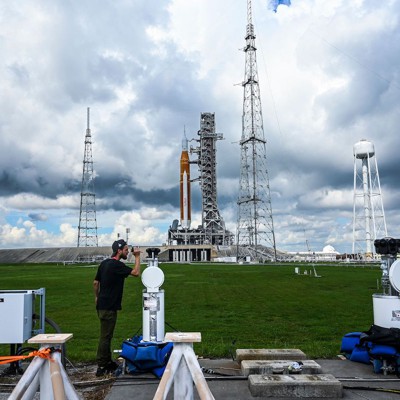 NASA’s launch to the moon on Monday will be one small step toward a lunar ecosystem that the military will eventually need to surveil and protect, according to two space experts.

Boeing’s Space Launch System rocket, which has been in development since 2011, is expected to conduct a 42-day uncrewed flight around the moon for its first mission. The Orion capsule atop the rocket, which will be filled with mementos, a stuffed Snoopy, and sensors to collect data for crewed missions expected by 2025, will travel 1.3 million miles before splashing down in the Pacific Ocean in October.

It’s the first mission of the Artemis program, named for the twin sister of Apollo in mythology, which will bring people and supplies to the lunar surface and eventually to Mars. The second mission, which is expected to carry people around the moon, could launch in 2024, with the third crewed mission—the first to land humans on the moon since 1972—to follow in 2025.

Meanwhile, other nations are pursuing their own lunar ambitions as well. Governments and commercial entities are planning more than 100 missions to and around the moon, including a moon base operated by Russia and China in the early 2030s. Most are expected to happen in the 2020s, said Kaitlyn Johnson, deputy director of the Aerospace Security Project at the Center for Strategic and International Studies.

It will be up to U.S. Space Command, whose area of responsibility is anything above 100 kilometers, to keep an eye on each of these missions, said Johnson. The area around the moon is a current blind spot for the military, which could leave officials with a lack of awareness about both the operation of American satellites and what adversaries are doing near or on the moon.

“This is fairly imminent,” Johnson said. “I’d like personally to [start work on programs]…to detect and track satellites and objects passing through cislunar space by the end of the decade…because of the sheer amount of activity.”

“Every time China sets a space goal for itself, it hits it,” she continued. “We’re a little delayed in being able to have situational awareness of what is going on…[and] until we have that, we can’t think about what other security implications there might be.”

Chief of Space Operations Gen. John Raymond said in January that the space domain must be “safe, and security, and stable” for NASA to conduct science and exploration missions, and acknowledged an uptick in activity around the moon will require the military to keep an eye on the cislunar space.

“So as the nation goes further away, as the world goes further away, from the Earth, I think there’s going to be a requirement to have, at least—at a minimum—some domain awareness on that environment,” Raymond said. “I would say in…the next five to 10 years, we’re going to have to have some capability to be able to support those operations.”

Lt. Gen. Stephen Whiting, commander of the Space Force’s Space Operations Command, also said in May that with more nations planning moon missions, “we do need to be concerned and interested in what they are doing there.”

The Air Force Research Lab is expecting to launch the Cislunar Highway Patrol System in 2025 to study how the military can track objects around the moon about 385,000 kilometers from Earth. Most current Space Force sensors can only track objects out to 36,000 kilometers. NASA and the Space Force also signed a memorandum of understanding in 2020, agreeing to work together on tracking technologies beyond geosynchronous orbit.

The lunar surface could contain some critical resources, including ice in craters that could be chemically broken down to form oxygen for life support and hydrogen to fuel rockets, making it possible to launch deep space missions from the moon. As American companies and government agencies establish infrastructure on the moon to mine these resources, it will be up to the military to protect them, said Peter Garretson, a former Air Force officer and senior fellow in defense studies at the American Foreign Policy Council.

“The success of NASA’s Artemis program is absolutely essential to our nation’s national security strategy,” Garretson said. “The development of national-level activities on and near the Moon essentially creates national interests within the area of responsibility of US Space Command, and interests which the U.S. Space Force is obligated by law to protect.”

Others, however, argue that the usefulness or even existence of resources on the moon is unclear, leaving a big question mark about what commercial industry could spring up that would need protection or monitoring.

“I don’t think it’s going to have much impact on U.S. national security because I don’t think the Moon has a lot of national security value,” said Brian Weeden, director of program planning at the Secure World Foundation. “There may be something if it turns out there’s something economically beneficial on the Moon, say large amounts of water or some important minerals,  but we don’t know how that will pan out yet.”