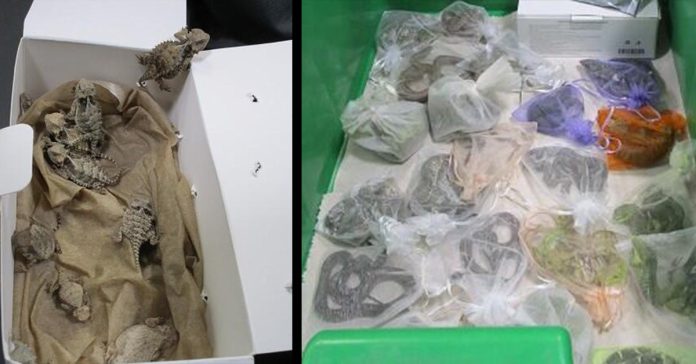 Six months after being apprehended at the U.S.-Mexico border with 60 reptiles concealed inside his clothing, 30-year-old Jose Manuel Perez has pleaded guilty to smuggling more than 1,700 wild animals into the United States over a six-year period. Perez was originally arrested at the U.S. Mexico border in the early morning hours of February 25, 2022 with 3 horned lizards and nine snakes concealed under his clothes. At the time, U.S. Customs and Border Protection (CBP) called it a “significant smuggling attempt.”

Perez, a 30-year-old American citizen, had pulled his truck into the San Ysidro Port of Entry around 3 a.m., where the CBP officer referred him and his vehicle for additional screening. Upon personal examination, “agents removed a total of 52 bags of reptiles…concealed in the man’s jacket, pants pockets, and groin area.”

Herpetologists at the San Diego zoo later identified some notable species among the confiscated animals, including three dwarf boas, four conehead lizards, a Uribe’s false cat-eyed snake, and a Pacific Coast parrot snake. Perez told the officers the reptiles were his pets, but an investigation revealed they were merely the latest in a steady stream of rare Latin American reptiles he smuggled into the U.S.

Read Next: Watch Three Men Save a Pet Dog from 12-Foot Anaconda

At the time, Perez was already suspected of being part of a long-running wildlife trafficking ring that smuggled more than 1,700 animals into the states. He sold many of the exotic animals on Facebook using an alias. According to the L.A. Times, those reptiles came from Mexico and China and included baby crocodiles, Yucatan box turtles, Mexican bearded lizards, and many other species. The combined value of the animals exceeded $700,000. For his crimes, Perez will face two counts of smuggling goods into the U.S. and one count of wildlife trafficking. After pleading guilty, he faces up to 20 years in federal prison for each smuggling count and up to 5 years for wildlife trafficking. He will remain in federal custody until his sentencing by a federal judge in December.

CNO: Pacific Forces Can Learn from NATO’s Work with Ukraine

Birthday of Marquis de Lafayette. He fought in the American Revolutionary War.