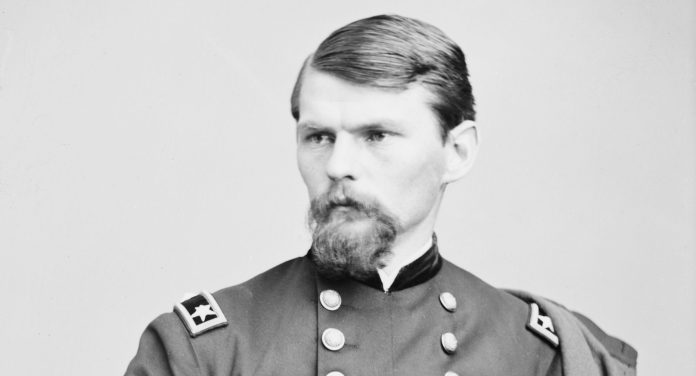 Today is the birthday of Emory Upton (August 27, 1839 – March 15, 1881). He was a United States Army General and military strategist, prominent for his role in leading infantry to attack entrenched positions successfully at the Battle of Spotsylvania Court House during the American Civil War, but he also excelled at artillery and cavalry assignments. His work, The Military Policy of the United States, which analyzed American military policies and practices and presented the first systematic examination of the nation’s military history, had a tremendous effect on the orgnaization and modernization of the U.S. Army when it was published posthumously in 1904. He has rightly been called “The father of the modern U.S. Army.”

August 27, 1917 was the birthday of American gun designer Robert Hillberg, best known as the designer of the C.O.P. four-barrel derringer, Winchester’s Liberator shotguns, the graceful Whitney Wolverine, and the Wildey .44 Magnum gas-operated pistol. He died in 2012.

Today we present a guest article by John Whitehead and Nisha Whitehead of The Rutherford Institute. It is reposted with permission.

We are urgently seeling entries for Round 102 of the SurvivalBlog non-fiction writing contest. More than $750,000 worth of prizes have been awarded since we started running this contest. Round 102 ends on September 30th, so get busy writing and e-mail us your entry. Remember that there is a 1,500-word minimum, and that articles on practical “how-to” skills for survival have an advantage in the judging.

“Redeeming the time, because the days are evil.”

How to Broadhead a Compound Bow