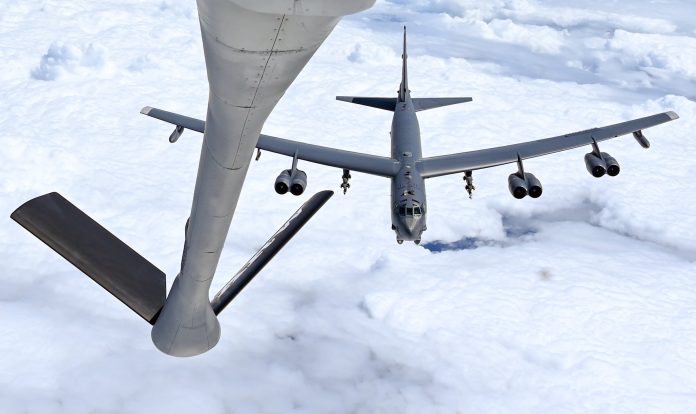 A KC-135 Stratotanker from the 465th Air Refueling Squadron refuels a B-52 Stratofortress during a cross country mission 13 Sept 2021.  (US Air Force/2nd Lt. Mary Begy)

WASHINGTON — At 70 years old, the venerable B-52 Stratofortress is getting a major facelift, what one Air Force official recently called the “largest modification program in its history,” that the service hopes will keep the plane relevant to 2050 at least. That’s if the service can juggle two major upgrades simultaneously — an ambitious goal for which the Air Force is still formulating a strategy.

In the middle of the decade, the service will begin outfitting the B-52 with the Raytheon AN/APG-79 radar used by the F/A-18E/F Super Hornet. At roughly the same time, it will embark on an ambitious engine replacement program, swapping the bomber’s aging Pratt & Whitney TF33 engines with a version of the Rolls-Royce F130.

Col. Louis Ruscetta, the Air Force’s senior materiel leader of the B-52 division, told reporters at the Air Force’s  Life Cycle Industry Days conference earlier this month that the Air Force was looking to “identify those friction areas” in terms of ensuring the B-52 has the space, power and cooling necessary to support all of those modifications and to guarantee that changes on one modification program don’t have a ripple effect across the B-52 fleet.

Ruscetta called the radar upgrade the “most exciting modification” in terms of adding new capability to the bomber. “This is really a game changer as you look at B-52 really performing that long range standoff capability as we go to a two-bomber force structure,” which will include the B-52 and upcoming B-21 Raider, he said. Specifically, the new radar will improve situational awareness, giving the B-52 a better ability to identify and prosecute targets.

To accommodate the Raytheon AN/APG-79, the B-52 will need modifications to its cooling systems, and the radar itself will be positioned “upside down” so that it can look down at the ground rather than the upward positioning used for the Super Hornet.

The Air Force recently completed the critical design review and is currently building a systems integration lab, which will act as a testbed that will allow the service to figure out how to integrate the radar in the B-52 before making changes to the actual aircraft, Ruscetta said.

Flight testing is scheduled to start late 2025, he said. The Air Force plans to declare initial operating capability for the radar upgrade in 2027, after fielding six operational B-52s with the new radar.

Meanwhile, the Air Force has already started work on the B-52 Commercial Engine Replacement Program, which will add eight new F130 engines to each B-52 as well as several supporting modifications, such a new nacelles, pylons, generators and cockpit display systems. The service awarded Rolls-Royce a $2.6 billion contact last year.

Although replacing the TF33 engines with a new, modern engine will inevitably improve fuel efficiency and range, there are no explicit requirements for the F130 to improve B-52 performance characteristics in order to limit development and field the new engines as quickly as possible, Ruscetta said.

“There’s nothing that’s concerning me from the design [standpoint] right now,” he said. “I think the design is fairly stable. What we are seeing really is — and I think this is [true for] managing any program in a COVID environment right now — supply chain challenges.”

Currently, the Air Force anticipates outfitting the first B-52s with new engines in the 2026-2027 timeframe, with initial operational capability occurring in 2030. The service is still working out exactly how the Oklahoma City Air Logistics Complex at Tinker Air Force Base will juggle both the radar and engine replacement modifications, as the new radar will be ready to be installed before the new engines.

“The first jets that will come out of that [radar] mod line will most likely have radar only, and then at some point, probably at their next depot timeline, [they will] come back to get the engine replacement,” he said. However, once both the engine and radar replacement programs are in full swing, B-52s will likely receive both technologies during the same depot period.

Although Ruscetta said the program is moving smoothly, lawmakers have voiced concerns about potential cost increases over the life of the program. During a House Armed Services Committee hearing in May, Rep. Rob Wittman, R-Va., questioned Air Force acquisition executive Andrew Hunter over a 50 percent cost hike to the B-52 CERP program, according to Air Force Magazine.

Ruscetta said that cost calculation was “taken out of context,” with the figure resulting from comparing current cost estimates with the Air Force’s early business case estimates instead of the program’s cost baseline.

“The program has seen minor cost growth since our first true AF independent cost estimate in 2019 of about 12%,” he said in an emailed statement to reporters after the roundtable. “The FY22 NDAA established a cost baseline for the CERP program using the FY20 cost estimate. Currently we have seen estimate growth of 3% from the congressionally mandated baseline.”

The Air Force intends to deliver a selected acquisition report to Congress “in the very near future” that will lay out the full status of the program, fulfilling an statutory obligation laid out inf the fiscal 2022 defense policy bill, Ruscetta said.

Best States For Self-Defense. Do You Live In One Of Them?