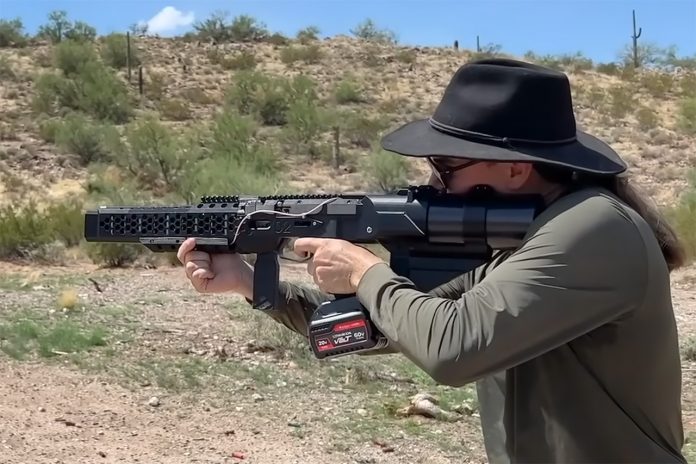 Whether it’s from sci-fi movies, video games, or books, we’ve often been told that present-day firearms will be replaced by high-tech blasters decked out with buttons, screens, and battery packs in the future. But is it true? We’ve also been told that our four-wheeled vehicles will be replaced by flying cars, jetpacks, and hoverboards, but we haven’t seen anyone zipping around town like Marty McFly or the Jetsons. A company known as ArcFlash Labs has been pushing the envelope with 3D-printed electromagnetic guns that have become more sophisticated and powerful with each new model. The latest creation, the ArcFlash Labs EMG-02 coilgun, was recently tested in a video from Forgotten Weapons. The results have us thinking that those sci-fi blasters might not be so far-fetched after all.

Above: This coilgun fires cylindrical pieces of steel using a 15kW Gauss accelerator. No gunpowder, primer, or casing required.

The EMG-02 is described by ArcFlash Labs as a “10-stage medium voltage capacitor augmented fully-automatic coilgun.” That’s a mouthful, but in simpler terms, it uses electromagnetic coils to accelerate solid steel projectiles to about 250 feet per second (75 meters per second). We’ve seen the term “railgun” used to describe this category of electronic weapon, but that’s not accurate in this case. It’s a coilgun or gauss gun (not a gauss rifle, since it has a smooth bore).

This still from the Forgotten Weapons video shows the ArcFlash Labs EMG-02 below its predecessor, the ArcFlash EMG-01. On the 01, ten cylindrical capacitors at the bottom of the handguard powered eight coils around the barrel; on the 02, there’s one huge capacitor inside the shoulder stock, which powers ten coils around the barrel. Several other improvements have been made, including the use of an off-the-shelf lithium-ion drill battery. Improved efficiency allows the EMG-02 to fire up to 13 rounds per second.

Above: Iain from Forgotten Weapons holds the ArcFlash Labs EMG-02 with a 20V drill battery installed.

Of course, there are some drawbacks and growing pains associated with all cutting-edge technologies, and this appears to be true of the EMG-02 as well. In the Forgotten Weapons video, Iain mentions that the weapon isn’t especially accurate, and demonstrates this by showing shot groups at the range. The projectiles tumble after leaving the barrel, since they’re not stabilized by rifling. It’s also expensive compared to most modern carbines, at an MSRP of $2,795. However, it’s exciting to watch this tech develop and consider where it might be 5 or 10 years from now.

Check out the video below from RECOILtv, and for more info on the ArcFlash Labs EMG-02, go to ArcFlashLabs.com.