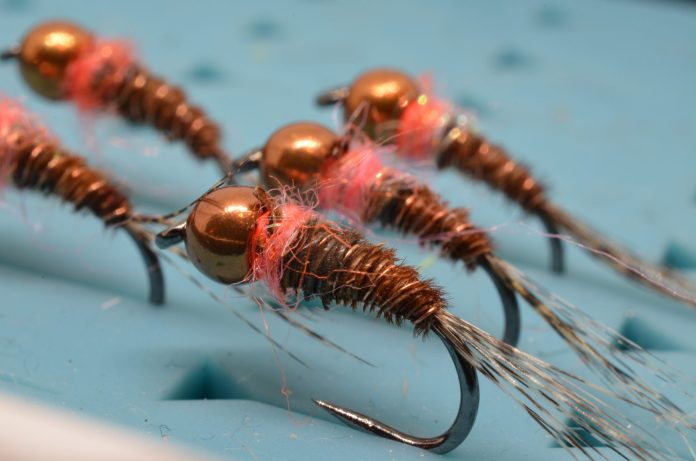 Part of the fun of fly fishing is having lots of different flies and knowing how to use them. But the sheer number of flies that have been devised over the years is sure to intimidate anyone thinking of taking up a fly rod. There are thousands, and fly fishers are dreaming up new ones every day.

The good news is all those “new” flies are variations of a few basic styles. The five flies listed here will cover most of the situations you’ll encounter when trout fishing. Learn what they’re for and how they work, and you’ll begin to make sense of the myriad fly patterns available today.

Everybody loves dry-fly fishing—using a floating fly to catch trout that are snatching insects from the surface. Trout don’t rise all the time, so a great deal of planning goes into being on the stream in time for the “hatch.” When it does happen, it’s exciting: anticipation builds as your carefully selected fly drifts downstream toward the rising trout. A sudden splash provides the thrill of victory.

The Elk Hair Caddis is a brilliantly simple design for a floating fly. It mainly consists of bleached elk or deer hair lashed onto the top of a hook, with the tapered tips pointing rearward. It looks a lot like a real caddis fly, whose wings lie tented along its body when at rest, as opposed to a mayfly, whose wings are mostly upright. Most trout streams have more caddis flies than mayflies, and trout love to eat them. You can, however, use an Elk Hair when you see trout rising to mayflies floating on the surface, or when you don’t actually know what they are rising to. You can even use it when trout aren’t rising at all, in the hope they won’t pass up a perfectly good fly floating overhead. That’s true often enough to make it worth a try.

The fly’s oblong body, translucent wing, and feather-fiber legs are all triggers that inspire trout to bite. It casts nicely, floats like a cork, and has the quality that mid-20th century writer Ted Trueblood called “insectness.” Carry some in size 12 (about a half-inch long), some in 18 (a quarter-inch), and some 14s or 16s for the in-betweens.

Trout may not be rising, but they’re still eating—just underwater and out of sight. The flies that eventually emerge at the surface live most of their lives on the streambed, as crawling nymphs or helpless larval worms. These critters are almost always present in trout streams and often end up drifting in the current, where trout casually pick them off as they pass.

Flies that imitate these subsurface bugs are known as nymphs. The Frenchie is one of the best. Developed by European competition anglers, it has a metal bead head, usually made of tungsten, which helps it sink quickly down to the trout’s snacking lounge among the streambed rocks. It has a speckled tail, which certainly seems to suggest the tails or trailing shucks on lots of real aquatic insects, and its body is mostly made of fibers from a pheasant’s tail, which has a segmented, fuzzy, brown, bug-like look when wrapped onto a hook shank.

The Frenchie is also notable for what it does not have—features meant to make it look more like a real insect, like a rib wound around the body, legs or feelers made from feather fibers, or a “wingcase” on the top of the shank. If it were a painting, the Frenchie would be considered impressionistic, not realistic. Many of the best flies and lures are the same way, and competition anglers wouldn’t use the Frenchie if it didn’t work. Also notable on the Frenchie: a gaudy “hot spot” of pink, orange, or another bright, completely unnatural color. It gets the trout’s attention, and a trout can’t eat a fly it hasn’t noticed. Frenchies aren’t usually very small or very large; size 12 to 16 is the typical range.

A lot of people have called the Woolly Bugger their desert island fly, the fly that airmen should pack in their survival kits, the only fly anybody really needs if the goal is catching fish. It’s probably an exaggeration to say it catches every fish that swims, but people say that too. The Woolly Bugger is really a category unto itself these days, because so many people have tweaked the recipe over the years. The basic recipe consists of a soft, wavy tail and a yarn body with a feather wrapped around it so that the fibers splay out.

Woolly Buggers are bigger than most “insect” flies like the Frenchie and Elk Hair Caddis, usually around 2 inches long, and are often considered “streamer” flies, which means they look like a small fish and are made to swim underwater like a swimbait. However, Buggers also resemble large bugs like stonefly nymphs, hellgrammites, and caterpillars, and can be drifted like a nymph. Part of the fun of using a Bugger is the fact that, in its basic form, it was catching fish in Europe hundreds of years ago. That original version, with the yarn body and wrapped hackle feather, became established as a bass fly in the Ozarks in the early 20th century, and became the Woolly Bugger when Russell Blessing of Pennsylvania added the soft marabou feather tail in the 1970s.

A small assortment of Woolly Buggers in sizes 10 through 6, in earth-tone black, brown, or olive, will cover a lot of freshwater fishing. The ones with metal beads or cones are best since they sink quickly.

The Rusty Spinner imitates a mayfly at the end of its life, floating helplessly downstream. Over the past 48 hours or so, this insect has swum from the streambed to the surface, transformed from crawling nymph to winged adult, avoided being eaten by fish or birds, molted again into a sexually mature fly, mated in a midair swarm over the stream, and fallen back to the water. Trout love these flies. That’s why anglers get so excited about catching a “spinner fall.” But like the Elk Hair Caddis, the Rusty Spinner is effective beyond its intended purpose. Trout will often rise to take one even if there hasn’t been an actual spinner fall in weeks.

After all, an easy snack is an easy snack. And the Rusty Spinner creates the unmistakable profile of a ready-to-eat bug. Its body, wings, and tail lie flush on the water’s surface, so the fly is highly visible, silhouetted against the sky. It is equally useful in sizes from tiny to jumbo. As small as size 22, it could represent a little Blue-Winged Olive or the mini mayfly known as the Trico, while in size 10 it serves to imitate one of the larger mayflies, like the Isonychia or Brown Drake. It probably reminds the trout of any number of bugs with wings that end up floating on the stream, on purpose or by accident—everything from midges to moths. So it’s worthwhile to carry these in a wide range of sizes. Because of their flat shape, they can be difficult to see; fortunately, there are versions available with little neon-bright appendages on their backs, which aren’t visible to the trout but make it much easier for the angler to follow the fly’s progress downstream.

5) The Partridge and Green

There are times when trout feed near the surface, but not on it. They might be feeding on a hatch of mayflies or caddis flies, but more interested in bugs on their way to the surface than those already there. Or they may just be grazing on random insects adrift in the middle depths. It’s not necessary to bounce a nymph along the bottom, but a floating fly won’t get the job done. You need a wet fly.

The Partridge and Green is never a bad choice at times like this. It has a green body with just a couple of wraps of banded partridge feather suggesting the legs (this is often referred to as a soft hackle, which is also what the general category of similar flies is called.) It’s slender and light, a quality shared by many real aquatic flies but not achieved by many fake ones. So along with being a great general-purpose fly, the Partridge and Green can be effective on trout that are not fooled by heavier, shaggier patterns.

Read Next: 8 Vintage Streamer Patterns for Trout and Salmon

The Partridge and Green has two siblings, the Partridge and Orange and the Partridge and Yellow, along with lots of cousins made the same way, with a simple body and wispy hackle.  The green version is a good choice because that shade is seen on some common caddis flies, although yellow and orange show up among aquatic flies, too. It is generally used in sizes 12-16. You’ll be glad you have one with you if you see fish feeding just below the surface during a hatch, and it’s never a bad idea to drift one down through a riffle or slowly swing and twitch it through the tail of a pool.

New F-16s give Jordan’s air force a boost, but what comes next?

New from Kalashnikov USA – The Kommander Rifle -The Firearm Blog