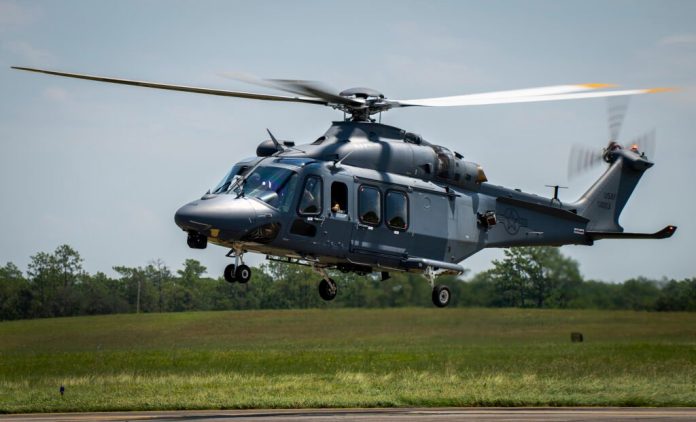 An MH-139 Grey Wolf lifts off for a mission Aug. 17 at Eglin Air Force Base, Fla. The Grey Wolf sortie was the first flight since the Air Force took over ownership of the aircraft Aug. 10.  (U.S. Air Force/Samuel King Jr.)

WASHINGTON — After more than a year of delays, Boeing has delivered its first four MH-139A Grey Wolf helicopters to the Air Force after the aircraft was finally certified by the Federal Aviation Administration.

The company announced Friday that it had received a supplemental type certificate necessary to begin delivering the helicopter, which is based on the commercial AW139 helicopter made by Italian firm Leonardo. While the AW139 had previously been evaluated by Europe’s civil aviation safety authority, the FAA was required to certify the Grey Wolf’s military specific technologies before it could be delivered to the US Air Force for military tests.

While all four were delivered by the end of last week, the Air Force actually received its first MH-139 on Aug. 10, which then took off on its first mission with an all-Air Force crew days later on Aug. 17 at Eglin Air Force Base, Fla., the service stated in an Aug. 24 news release.

“This milestone really represents the beginning of Air Force testing for the Grey Wolf,” said Lt. Col. Mary Clark, a Grey Wolf pilot with the 96th Operations Group, who previously worked on requirements for the program. “We can now open up those test points for the military and push the envelope more to ensure we’re delivering that operational capability the units need out of the helicopter.”

While the Air Force will now be able to start military utility testing of the Grey Wolf, the program remains behind schedule. A Milestone C decision to begin initial production is anticipated for 2023, more than a year later than its original target of September 2021, Mark Cherry, vice president of Boeing’s vertical lift division, said in June.

In a statement released Friday, Cherry hailed the delivery of the first four helicopters as a positive sign of the program’s progress, calling it a “tremendous first step in a long line of Grey Wolf deliveries.”

“The Grey Wolf is a modern, versatile aircraft offering greater range, speed and endurance than the UH-1N Huey it replaces,” he said. “I am proud of our team who, along with our partner Leonardo, helped us to achieve this milestone.”

The Air Force expects to buy 80 MH-139As to replace its aging UH-1N Huey fleet used for executive transport and defending the nation’s nuclear missile silos. Boeing beat out Lockheed Martin and Sierra Nevada Corp., which each offered variants of the UH-60 Black Hawk, to win a $2.4 billion contract for the program in 2018. Leonardo builds the commercial A139 in Philadelphia, which Boeing then modifies with military-specific technologies.

The Air Force intends to buy five Grey Wolf helicopters for $156 million in fiscal 2023, and has already procured the first eight MH-139As.

What Happened to the Beretta 90-Two?

Gun Meme of the Day: A Shot at Gold Desert Eagle Owners Edition