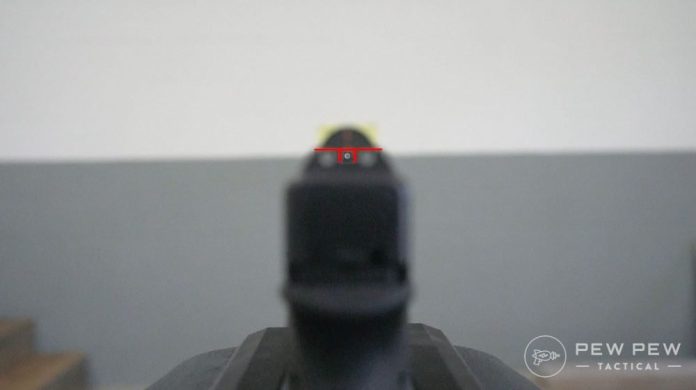 Eyes can be dominant, just as with hands and legs, and an important part of shooting accurately is knowing which eye is dominant.

The vast majority of people have dominant eyes that match their dominant hands, but a few (myself included) are cross-dominant.

Here is one easy test to see which of your eyes is dominant:

Not down for our sweet video right now?

It will be easier for beginners to start by closing one eye and using their dominant eye.

However, as you progress, you will likely find yourself shooting better with both eyes open. It will take a while to train your brain, but you’ll see benefits such as increased depth perception and orientation.

Your eye dominance can often dictate which stance you like better.

For me, since I’m left-eye dominant and right-hand dominant, I prefer the Modified Weaver/Chapman stance since it puts my left eye more behind the sights.

In the grand scheme of things, yes, that’s pretty much it. But proper sight picture is one of those fundamental things that make the difference between a shooter and someone that just plays with guns.

The sight picture is everything you see with your sights and your target.

There are several different types of sights, but most firearms will have a notch or circular rear sight with a post or bead as the front sight. Also very common is the three-dot sight.

All of them, no matter what their setup, work on the same principle. The front sight can be many things but usually is more contrasting than the rear sight to draw in the eyes.

You’ll then want to make sure you have proper sight alignment.

This will vary on your sights but mostly will require you to line up your sights. Where you’ll be hitting also depends on personal preference or, more likely…how your gun is set up from the factory.

Some people like the first one, which is called the “6 o’clock hold,” where you line up the bottom of the target with the top of the front sight so you can hit the middle of the target.

The most traditional and called “point of aim, point of impact,” where you line up the top of the front sight with where you want to hit.

The final question is where to focus with your eyes.

There are three choices—the rear sight, the front sight, or the target.

Every expert in the world will tell you that you will get the best results by keeping the front sight in focus while pulling the trigger, as it will really help you to keep the gun steady.

Brownells Daily Defense goes over focusing and sight picture in the video below.

This is the main reason why a lot of front sights are distinctly colored. When you’re correctly focusing on the front sight, the rear sight and target will appear blurry.

The best flow is to first focus on the target and loosely line up the dots onto it. At this point, change your focus to that front sight and line it up with the rear sights as well as the blurred-out target.

There are also electronic sights that allow for both eyes to be open and focus only on one object. Here is an example of a typical “red dot” sight.

Want even more red dot action? Check out some of our favorite Red Dot Sights.

Determining eye dominance is the first step in shooting more accurately. Paired with a good sight picture and you’re sure to be nailing those targets in no time!

Want a drill that will help with sight alignment (and diagnosing whether your sighting is the issue)? Check out the Brownells Daily Defense video below.

Looking for more shooting tips? Try out our How to Shoot Handgun More Accurately guide.