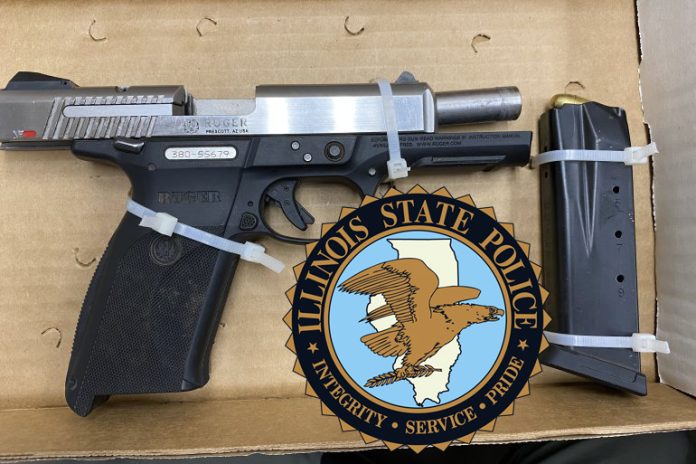 Though most people don’t know it, the Illinois State Police (ISP) now make house calls.  However, they aren’t coming to welcome new neighbors or bring good cheer. Instead, they’re coming to confiscate the firearms from those with revoked Firearms Owners ID cards.  While few would argue the merits of grabbing guns out of the hands of convicted violent felons, the ISP revokes FOID cards often without due process.

This past week, the ISP put out a press release about “compliance checks,” an almost Orwellian description of gun confiscation details.

Illinois State Police announced Wednesday that it has forced nearly 300 people in southern Illinois to give up ownership of their firearms after they had their firearms rights revoked.

As part of a “firearms enforcement blitz” from June 16 to July 31 in 41 southern Illinois counties, including St. Clair, Madison, Monroe, Clinton and Randolph counties, state police officers performed 710 “compliance checks,” which resulted in 295 people being “placed into compliance” with the state’s Firearms Owners Identification Card, or FOID card, law.

The local newspaper reported the ISP press release verbatim without bothering to investigate how some of those folks had their FOID cards “revoked.” Hint: It’s done without due process and on a regular basis.

Interestingly, it seems as though over half of the “compliance checks” were met with bad addresses, individuals not home, or people declining to participate. Some may have told the troopers to come back with a warrant.

Here’s the actual press release (as a .pdf) announcing the “enforcement blitz” . . .

To their credit, for those who haven’t been convicted of any felonies, the Illinois State Police will generally try to help the revoked person re-home the firearms with a friend or family member with a valid FOID card.

In my capacity with Guns Save Life I asked about ISP details grabbing up guns from those revoked or expired. Or, in the case of a minor child who becomes revoked, potentially all guns accessible to the minor. Because as gun owners in Illinois, we’ve all heard horror stories. The ISP sent me this official response . . .

The Illinois State Police works to ensure individuals are in compliance with the FOID Act and other applicable possession of firearm laws for those who have had their firearm right revoked.  ISP is not conducting “gun confiscation visits.”  With the responsibility of protecting the public’s safety, ISP focuses enforcement details on revocation for those individuals who pose a significant threat to themselves or others; not expiration.  Enforcement visits are determined on a case by cases basis.  If there is no evidence of a significant public safety risk (violent felony indictment, specific serious threats, etc.), officers work to make these productive and consensual visits.  The majority of the time we can help place people into compliance without criminal charges or other action.

We do this by ensuring the individual’s FOID card has been turned into the proper law enforcement authority and by ensuring any firearms in their possession have been temporarily turned over to someone with a FOID card who can legally possess them until the individual in question has had their firearm rights restored. If an individual does not have anyone to whom they can legally turn over their firearms, the law enforcement agency will have to take temporary custody of the firearms.  While ISP can take possession, we prefer to help facilitate a transfer to someone who can legally possess the firearms.

If there is an individual with a valid FOID card in the same dwelling as someone who has had their firearms rights revoked, it is the responsibility of the other firearm owners who have firearms, not to allow a prohibited person to gain possession of their firearms.  There is nothing in statute that allows law enforcement to seize a mother or father’s firearms or ammunition if a sponsored minor losses their firearm rights and the parents have their firearms rights. It is the responsibility of the parent/responsible gun owner to ensure the prohibited minor does not gain possession of the firearms.

So there you have it.

But back to the revocation issue, sans due process. From MSN.com . . .

Illinois State Police on Monday submitted an emergency rule to allow for broader use of “clear and present danger” reports — aimed at barring applicants from receiving a firearm owner’s identification card or revoking a current card for those who exhibit violent or suicidal behavior.

It’s an effort by Gov. J.B. Pritzker and the Illinois State Police to close a loophole two weeks after Robert E. Crimo III was charged with killing seven people at the Fourth of July Highland Park parade.

Crimo was able to get a FOID card and buy multiple guns, despite two separate 2019 incidents in which he allegedly threatened to harm himself and his family. After the suspect was charged, State Police director Brendan Kelly said there had been “insufficient basis” to deny Crimo’s request for a FOID card — with family members denying his threats and no domestic violence order or court order restraining him from having a gun.

Deemed a “first step” by gun control advocates, the new emergency rule is designed to allow State Police to consider a larger range of information in the definition of clear and present danger and clarify the agency’s authority to use the reports.

How has this worked out?  Let me share an example from the Chief Deputy Sheriff of a Central Illinois county.

About four-plus years ago, a man who worked as a security contractor for the US Government began packing his bags after an argument with his wife. She noticed him wearing his carry gun and called 911 to say that he threatened her with it prior to him leaving.

Of course, the ISP revoked both his carry license and his FOID card based upon the arrest and the “Clear and Present Danger” report. The man was also suspended from his job.

A few weeks later, the local state’s attorney determined the allegation to be unfounded and dismissed the case. Despite dropping the charges, it took the man two years of jumping through hoops and spending thousands of dollars to get his firearms rights restored so he could return to work.

Fast forward two years to present day. The ISP just revoked the same man over the same four-year-old “Clear and Present Danger Report.” Why? They wanted to “re-investigate” the matter and revoked both his carry license and his FOID once again while they revisit the matter.

How is that even remotely fair, just, or equitable?

Plenty more folks have had their rights revoked because of an acute mental health crisis, some resulting from adverse reactions to medications, have also reported having the FOID cards and carry license revoked over issues already resolved at great expense. And in at least one other case, a reformed felon who litigated – at great expense – to have his gun rights restored under Illinois law was again revoked pending yet another review of his case.

That’s why Guns Save Life filed suit in 2019 to challenge the FOID Act’s constitutionality.  Yes, courts move at a glacial pace, but we filed for a summary judgement after the Bruen decision. Final briefs are due to the circuit court in November.

One thing’s for sure, when (not if) the FOID Act is ruled unconstitutional, there won’t be enough marijuana on the shelves of Land of Lincoln dispensaries to help the gun-haters cope with the loss.