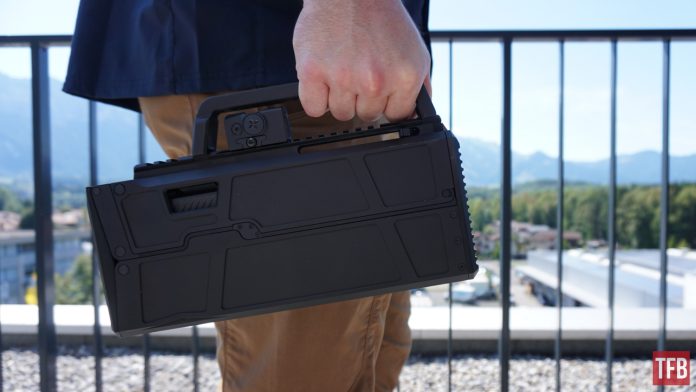 HANDS ON: The Swiss B&T BWC So what does BWC stand for?  That answer is as simple and straightforward as they come, “Because We Can”.  That doesn’t mean this design is simple, and it does allow for some very cool end-user customization.  My first question was “Where would I put a light?” that was quickly answered by “Underneath the carry handle, then mount the dot on a riser at the rear”.  It’s almost like they’d thought of this already. The spring-loaded cocking lever also acts as a deployment lever when the BWC is folded for transport.  It tucks underneath the front of the charging handle making the design snag-free. Pushing that deployment lever allows two things to happen.  First, the stock drops free and out of the way.  Then the hinged pistol grip with magazine follows behind it. A locking plate in the middle of the stock locks the stock into place when the BWC is fully deployed.  To collapse the stock, you simply lift it back up on the plate and the stock flips back down. The hinged pistol grip acts in almost the same way with gravity doing the work for you.  To fold the grip back into place, push the button on the back of the pistol grip to unlock the grip and fold it forward. All of this can be done remarkably quick, but there are a few things you have to learn.  Magazine geometry won’t allow for the magazine to be fully seated while in transport mode.  This means you’ll need to tap and rack after deployment.  Additionally, this means you need to slightly remove the magazine before it can be folded for storage. Carry Handle For Transport and Deployment

The B&T BWC will be sold as an accessory, and B&T expects these to be ready to ship later this year.  Only a stock option was shown, meaning those looking to purchase the BWC will need to have a SIG 320 FCU Form 1’ed as an SBR.  Internally the BWC will utilize all P320 components minus the polymer frame.  So for those interested in a BWC, it might be best to shop for a donor P320 to Form 1 in advance.  Certainly not for everyone, we personally can’t wait for the B&T BWC to come to market.

For more information on the B&T BWC check out the TFBtv video below, and thanks for reading!

Defence and Freedom: The West was foolish