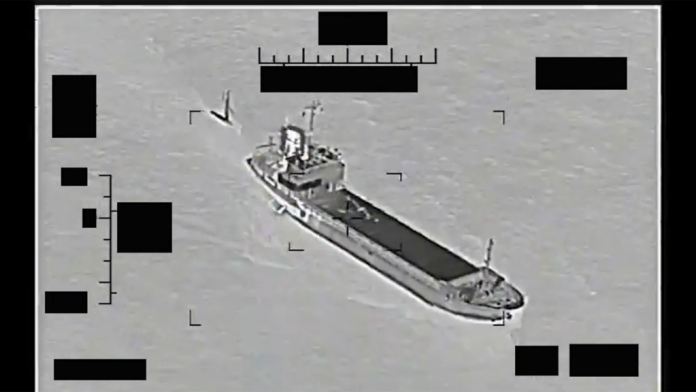 WASHINGTON — The US Navy’s 5th Fleet today announced it thwarted an attempt by an Iranian ship to seize an American unmanned surface vessel operating in the Arabian Gulf.

The incident played out late at night on Aug. 29, when the service spotted Iran’s Islamic Revolutionary Guard Corps Navy support ship Shahid Baziar attaching a towing line to a Saildrone Explorer unmanned surface vessel. The Thunderbolt (PC-12), a patrol coastal ship, as well as an MH-60 Sea Hawk from Helicopter Sea Combat Squadron 26, based in Bahrain, responded to the situation.

“The actions taken by U.S. naval forces in response resulted in the IRGCN vessel disconnecting the towing line to the USV and departing the area approximately four hours later,” according to a 5th Fleet statement.

Cmdr. Tim Hawkins, a US 5th Fleet spokesman, told Breaking Defense today the Iranian ship released the USV following multiple attempts from the Thunderbolt to establish communications with the Iranian crew as well as the persistent presence of both the US ship and helicopter in the area.

“IRGCN’s actions were flagrant, unwarranted and inconsistent with the behavior of a professional maritime force,” said Vice Adm. Brad Cooper, commander of US 5th Fleet. “U.S. naval forces remain vigilant and will continue to fly, sail and operate anywhere international law allows while promoting rules-based international order throughout the region.”

Gen. Michael “Erik” Kurilla, commander of US Central Command, added, “The professionalism and competence of the crew of the USS Thunderbolt prevented Iran from this illegal action. This incident once again demonstrates Iran’s continued destabilizing, illegal, and unprofessional activity in the Middle East.”

Iran’s apparent seizure attempt of the US drone comes against a delicate political backdrop, with leaders from Tehran, Washington and Europe reportedly in final negotiations to bring back a new version of the Joint Comprehensive Plan of Action (JCPOA), commonly known as the Iran nuclear deal. Iran also has a history of reverse-engineering captured American drones.

The news about one Saildrone’s attempted abduction in the Arabian Gulf comes the same day the California-based company announced a strategic partnership with the Alabama-based shipbuilder Austal USA. Manufacturing of the company’s Surveyor USV destined for the Navy’s fleet will begin in October 2022.

“The partnership ensures that production of the Saildrone Surveyor will accelerate to meet the rapidly growing demand for the ground breaking technology,” according to an Austal statement. “The Surveyor was developed and designed by Saildrone and will be manufactured exclusively by Austal USA in Mobile, Ala.”

Saildrone Surveyor is approximately 65 feet in length and is designed for deep ocean mapping as well as intelligence, surveillance and reconnaissance missions. The company has provided numerous USVs to the US Navy — and to US 5th Fleet in particular — as the service continues to experiment with the technology to inform its own unmanned programs of record.