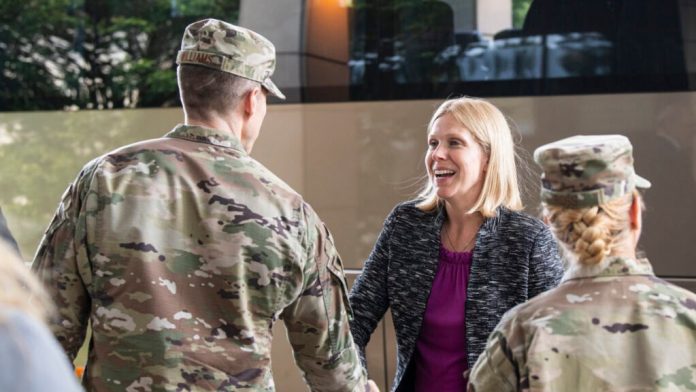 WASHINGTON — In a new interim draft strategy, the Air Force’s chief information officer lays out the service’s vision over the next six years for its future digital environment, including implementing zero trust, accelerating cloud adoption and harnessing data and artificial intelligence.

The draft strategy, published Friday [PDF], will guide the service from fiscal 2023 to 2028 on where to spend its money, time and focus, Knausenberger said. The strategy lists six lines of effort: accelerating cloud adoption, the future of cybersecurity, building a talent management strategy, IT portfolio management, excellence in core IT and mission-enabling services and data and artificial intelligence.

The service includes a familiar provision to implement a zero trust architecture that “protects data in a cohesive way across multiple classification levels,” the strategy states, including the foundation identity (ICAM) elements that manage users, credentials and the access risk based on the sensitivity of the resources being protected.

Knausenberger said zero trust is the framework that will allow the service to simplify its war fighting environment.

“If we can get to the point where we know who you are, that we have our data tagged, that we can get to multi-level security, that we can maybe not have folks like the USAF commander have 22 different networks in five different machines on their desk, [then] we can fight a lot more easily,” she said.

The Pentagon’s CIO last week said the department is committed to implementing a zero trust architecture across the sprawling military in the next five years and will be releasing a new strategy to get there as soon as next month.

“What we’re aiming for is by 2027 to have zero trust deployed across a majority of our enterprise systems in the Department of Defense,” DoD CIO John Sherman said Aug. 24. “Five years. That’s an ambitious goal… but the adversary capability we’re facing leaves us no choice but to move at that level of pace.”

When it comes to cybersecurity, the Air Force strategy calls for defining and training the workforce on the “foundational risk posture” for the entirety of the Air Force and Space Force enterprise. Resilient cyber defense includes driving cryptographic agility and modernizing and innovating to strengthen critical infrastructure. Incorporating robust automated cybersecurity defenses and equipping “cyber defenders” to defend their terrain is another tenant.

Knausenberger said the “key tenet” with cybersecurity is that the Air Force has to do it globally and have a “seamless tie between our cloud and our edge.”

The strategy also calls for having automation, analytics and AI designed into all systems from the beginning, including entrenching AI/machine learning training-data and algorithmic models that are compliant with the Office of the Secretary of Defense’s six tenets for responsible AI implementation across all echelons of the Air Force.

To get after AI/ML readiness, the strategy says the CIO will establish a “federated data ecosystem” integrated with Air Force weapon systems and theater operations to ensure data is visible, accessible and secure across the force.

The service also wants to assess its existing IT policies to address gaps in management and identify redundant and inefficient IT spending, while incentivizing migration to enterprise-wide acquisition vehicles. The strategy calls for several network-related efforts, with the end-goal being that airmen and guardians can rely on their devices and data with over a 99.99% consistency.

To get after that, the Air Force CIO will deliver a single “network operations center and security operations center for the enterprise with integrated and effective automation,” identify and provide hardware and software and implement automated governance controls to enforce standards, among other efforts.

That’s a lot to do, and this is a draft strategy. But Knausenberger added a final version of the strategy can be expected “over the coming days.”