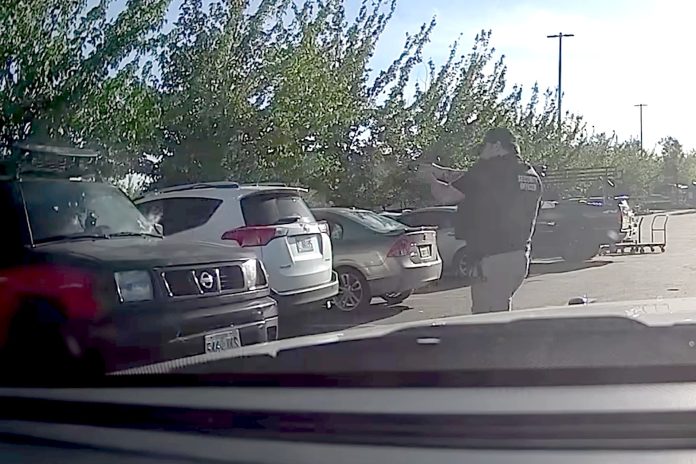 What happens when you post an untrained security guard armed who’s with a handgun he’s not licensed to carry at your business? If things go poorly, you’re almost sure to test the limits of your liability insurance coverage. That’s happening right now the to developers after they hired the wrong company to manage security at a retail center in North Portland, Oregon.

Security Guard Logan Gimbel, aged 28, shot and killed a man in broad daylight over the 2021 Memorial Day weekend at the North Portland Lowe’s. News of the incident didn’t go national until the guard’s body cam video was released by prosecutors after they filed murder charges against the guard.

The now-former guard is facing a second-degree murder charge and claims that the man he shot was using his truck as a deadly weapon. Indeed, an innocent person has every right to use deadly force to stop an attacker from trying to make him a hood ornament.

However, Gimbel’s conduct in the moments before the shooting escalated a shouting match and a trivial case of trespassing into gunfire and a homicide.

Gimbel identified the now-deceased victim, Freddy Nelson, as a trespasser at the store.  Instead of calling the police to cite the man and order him to leave the property, the unlicensed “mall cop” pulled his car in front of the trespasser’s truck, partially blocking him in.

“Get the f*** off my property!” was Gimbel’s opening remark to the alleged trespasser. He said that repeatedly after blocking the man in the parking space.

Gimbel barked orders to leave the property while standing in front of Freddy Nelson’s truck which was backed into a parking spot with Nelson behind the wheel. In fact, it looked as though Nelson and his wife were preparing to leave when the scenario began. But with the security guard’s car partially blocking them in, there was no way for them to leave.

“Are you refusing to leave?” the Gimbel asked the now-deceased Mr. Nelson. We can’t hear Nelson’s exact words in reply, but the guard Gimbel moved to physically remove Nelson from the truck. At that point things quickly turned into a pepper spray battle between the two.

That’s right, the unlicensed security officer sprayed pepper spray into the cab of the pickup truck through an open rear window. As if that was going to de-escalate the situation.

The guard kept repeating, “I told you to leave the property!”

Indeed, it seemed as if the guard was daring Freddy Nelson to run him down. And as tempers quickly escalated, Nelson looked like he was going to do just that. That’s when Gimbel fired four rounds into Nelson through the windshield.

As if Gimbel’s professionalism — or lack thereof — wasn’t evident enough, once the threat had ceased, Gimbel made zero effort to render aid to the man. Instead, the guard stood around telling the Lowe’s manager that the man was “bleeding out” while Nelson’s wife was screaming.

This incident will likely cost the shopping center’s developers, TMT Development, seven or eight figures and could bankrupt Cornerstone Security that put an unlicensed, poorly trained armed security guard in their company’s uniform in a marked company car.

As for Gimbel, he’s looking at a range of liability, both criminal and civil in a very left-leaning county. Good luck convincing a jury of Portland residents that what this guard did was moral, ethical, or reasonable under the circumstances. It doesn’t pass either the Reasonable Man Doctrine much less the Any Damned Fool standard.

The biggest take-away from this is that while you have every right to use deadly force against a criminal attack, if you instigate the confrontation, your defense in court becomes much more difficult.

The classic example is flipping someone the bird while driving. If that escalates into a road rage attack and you shoot the other driver who came after you moments after flipping him off and questioned his mother’s virtue, you may lose your mantle of innocence in court.

In this case, from viewing the news reports (which admittedly are oftentimes less than completely reliable) along with the surveillance and body cam footage, it surely looks like Logan Gimbel’s mantle of innocence was on shaky ground from the moment he put on that gun without the proper license that fateful day.

Furthermore, he did nothing but escalate the confrontation, something that doesn’t play well with cops, prosecutors or jurors. Let that be a lesson all of us can keep in the back of our minds.

The security officer not licensed to carry a gun who fatally shot a man in a North Portland parking lot earlier this year is now facing a murder charge, according to court records.

According to police, Gimbel was hired as an armed security guard to patrol businesses in the Delta Park area.

At around 6:40 p.m. on May 29, 2021, police say he shot and killed 49-year-old Freddy Nelson, who was sitting inside his pickup truck in the parking lot of the Lowe’s store on North Hayden Meadows Drive.

Gimbel’s records with the Oregon Department of Public Safety Standards and Training (DPSST) show he was not licensed to carry a firearm when he fatally shot Nelson.

Another lesson for business owners or churches looking to either hire security services… make sure any private security contractors hired to protect your interests are properly licensed, trained and insured. And if they’re volunteers protecting your church, make sure they’re level-headed and trained in the art of de-escalation.

After all, nothing will drive away church parishioners faster than a child custody dispute in the daycare area escalating into a drawn gun or worse because a volunteer security “guard” lacked training and skill sets above and beyond the use of the gun on their hip.

US Army secretary: 5 lessons from the Ukraine conflict