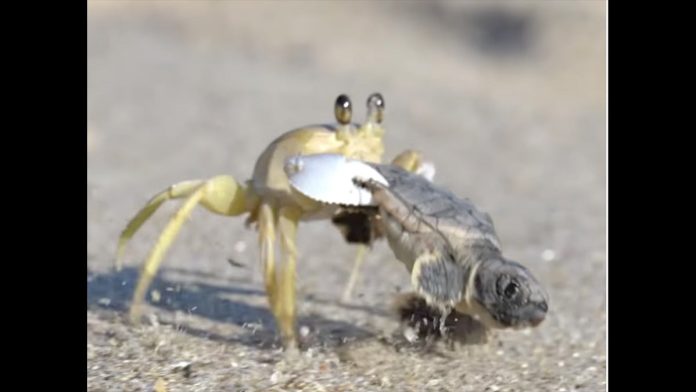 Nature photographer Mark Smith was out taking videos of turtle hatchlings earlier this month in Melbourne, Florida when he saw an intense sequence of events. He was videotaping a small loggerhead sea turtle hatchling making its way from its nest on the beach to the ocean, but something blocked its path.

“The crab came from out of nowhere and grabbed it,” Smith tells F&S. “It all happened so fast, and I was about 50 feet from the turtle. I was completely shocked when the crab picked up the turtle and ran.”

Smith’s video shows the loggerhead hatchling slowly working its way across the sand when the crab quickly catches it. The crab uses its pincers to pick the baby turtle up by its shell and side-shuffles down the beach with it. The turtle flails its flippers in the air as it is abducted. Smith says the video he shared on Instagram is in 4x slow-mo. The video doesn’t show what happens next.

Read Next: Watch a Cow Moose Save Her Calf from a Bear Attack

“The crab tried to pull the turtle into its hole in the sand, but the turtle wouldn’t fit, so the crab panicked and dropped it,” says Smith. “Luckily, the crab decided to give up and the turtle made it to the water. It was a tense moment for sure.”

According to NOAA Fisheries, loggerhead turtles are the most abundant species of sea turtle that nests in the U.S. That said, the species has been declining primarily due to being caught as bycatch in commercial fishing gear. The species is currently protected under the Endangered Species Act. It’s not clear what species of crab tried to make a meal out of the loggerhead hatchling in the video.

Air Force’s sixth-gen fighter downselect ‘not all that far away,’ says Kendall

Weapons of the Cold War -The Firearm Blog