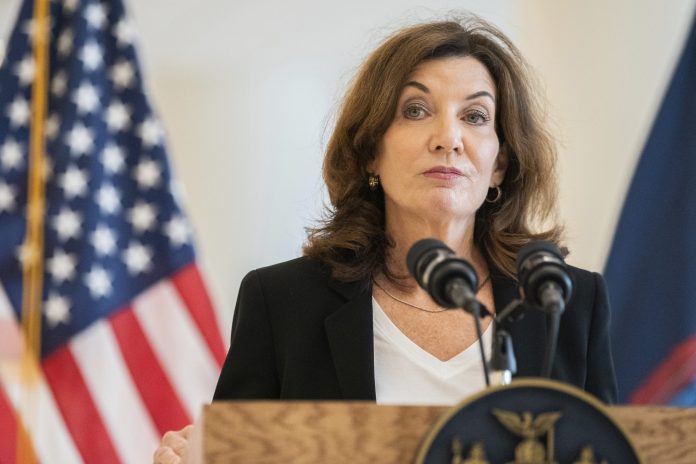 Those who vote for the opposition are American citizens. They’re moms and dads and grandparents and brothers and sisters. In many cases, members of the same family, neighborhood, groups of friends, and teammates don’t vote the same. You don’t have to like them, and you don’t have to agree with them. But you must respect them as fellow citizens because they have the same rights that you do. Your political beliefs don’t elevate you to some higher plane of consciousness or more advanced state of humanity.

Do Democratic officials who think and speak like [New York Governor Kathy Hochul] want to start a civil war? Not necessarily, but they are starting to casually declare that people who think differently from them don’t belong in “their” states. Those who can’t anticipate the kind of trouble this can stir up have a remarkable lack of foresight. We’re already living with the challenging consequences of “The Big Sort.” What happens when people start thinking that Republican voters in blue states or Democratic voters in red states deserve to be ostracized and driven out? What happens when Americans start thinking they’re entitled to live in a community or state of political homogeneity?

When you’re a governor, you’re the governor of everyone, even the voters whom you vehemently disagree with and who didn’t vote for you. It’s the same with legislators. If a citizen shows up at a House member’s district office and says that their Social Security checks stopped arriving, the staffer isn’t supposed to ask whether they voted for their boss or not. It’s right there in the title, “public servant.” You serve the public, not just members of your own party.

So no, I can’t stand it when some Floyd R. Turbo out there talks up a second civil war, or wild-eyed activists in the Texas Republican Party put a call for a state referendum on “Texas independence” in the state-party platform. Some of us have lived through Waco and Ruby Ridge and Oklahoma City, and the elders among us remember the Weather Underground and “Days of Rage.” There have always been some yahoos calling for a revolution. Most days, they never amount to much — which doesn’t mean they aren’t capable of killing people or committing outrageous atrocities.

But those yahoos don’t control any levers of government — at least, not yet. Cuomo did, Hochul does, and Crist is still a congressman.

— Jim Geraghty in Which Side Is Itching for a Civil War Again?

Gun Meme of the Day: And He Let It Be Known Edition

Clearwater, Florida Woman Shoots and Kills a Neighbor Who Attacked Her in Her Own Bedroom