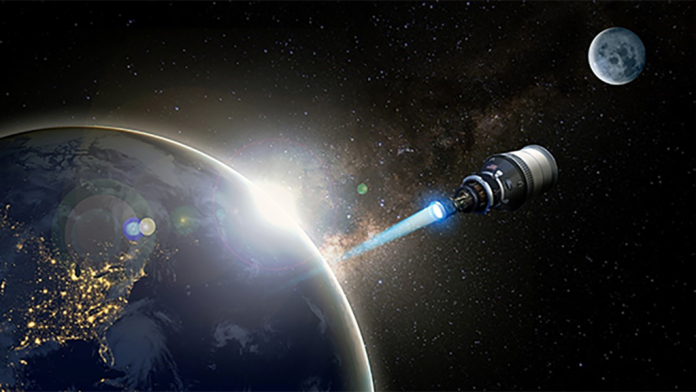 WASHINGTON — The capability to rapidly maneuver satellites — and the space-based infrastructure, such as orbiting re-fueling stations, necessary to support that capability — is among Space Command’s top priorities for technological innovation, according to Lt. Gen. John Shaw, deputy commander.

“We see it as a holistic endeavor, and we’re calling it ‘space maneuver and logistics,’” he told the DARPA Forward forum being webcast from Ft. Collins, Colo., today.

US national security space operators view the ability to move satellites and spacecraft more rapidly as increasingly necessary, including to avoid on-orbit collisions and dodge enemy anti-satellite missiles or space-based weapons. In addition, better propulsion systems will be required if SPACECOM and Space Force are successful in pushing DoD’s military space mandate into deep space — cislunar region of space between the Earth’s outer orbit and that of the Moon.

While many satellites can maneuver, if only so as not to drift out of their operationally required orbit, Shaw explained that doing so takes up precious on-board fuel. And that goes double for both rapid maneuvers and long-distance space travel, which require enormous amounts of energy (thus heavy loads of fuel) due to the laws of physics governing outer space.

“We’re kind of restricted right now, by the tyranny of the rocket equation. I’ve got to have mass to eject in order to move myself around within the Earth-Moon gravity well and beyond. How do we get past that? I’m interested in any thoughts on that, in any innovation along that line,” he said.

For instance, Shaw mentioned solar sails, which use the radiation pressure exerted by sunlight on large mirrors to propel spacecraft, as one intriguing possibility. (NASA has a number of small research projects underway to support development of solar sail tech, including the $2 million Diffractive Solar Sailing demonstration.)

Solar sails, he said, “may provide opportunities for long-dwell missions within the Earth-Moon gravity well, as as well as heliocentric orbits [around the Sun] that frequently revisit the Earth-Moon system.”

“That may be applicable to certain US Space Command missions, probably long-dwell ones and/or missions that require quick maneuver on short timelines with a decent amount of thrust and Delta V [change in velocity],” he explained. “And that will suit some missions more than others.”

“You’ll hear our counterparts in Indo-Pacific Command talk about a tyranny of distance in the Pacific area of responsibility. We can talk about a tyranny of volume, in that the relevant strategic spaces that we’re currently interested in at least extend to the entire Earth-Moon gravity well and that system, probably starting to go beyond that in some ways,” Shaw elaborated. “And so that’s a lot of volume. And that’s a lot of opportunity for us to miss things that are happening within that line that we need to be aware of.”

He noted that “historically” the US military has relied on ground-based sensors (radar and telescopes) to keep tabs on the heavens. But as SPACECOM looks out toward the Moon and beyond, space-based sensors would be required. (Air Force Research Laboratory is working on exactly that with its  Cislunar Highway Patrol System (CHPS) experimental satellite.)

Autonomous systems is the other area of technology where SPACECOM hopes to see rapid innovation, Shaw said.

“I would propose to you that in no domain will it be more important to have cutting-edge autonomy enabled by machine learning than in the space domain,” he stressed.

“And the reason I would say that’s true is because again, of the vast volume of distances that we’re operating in” where spacecraft “can’t wait for for human operators, or even machines necessarily, back on Earth to tell them what’s going on, how to behave,” he explained.