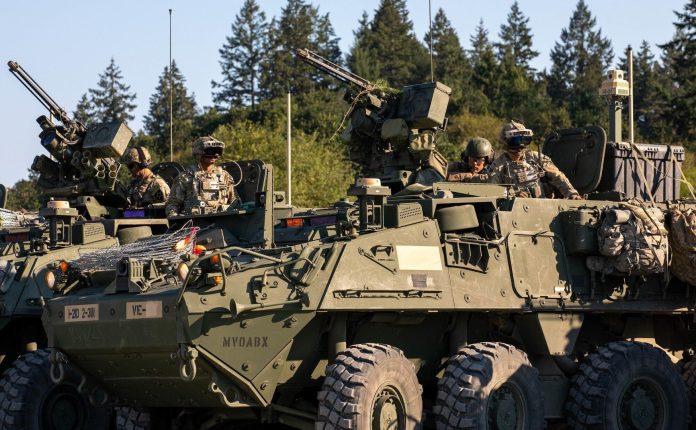 The event was part of the ongoing development of the Integrated Visual Augmentation System — or IVAS — based on Microsoft’s existing HoloLens 2 technology that has been tested by Soldiers since 2019. The IVAS system is an augmented reality goggle that provides Soldiers with real-time battlefield information such as enemy and friendly locations, navigation information, and high-resolution night and thermal vision.

IVAS’ capability is being significantly expanded with the latest iteration, according to David Morris, Ph.D. and lead network engineer for MITRE Corporation’s Army Platforms Division.

“The major new technologies we’re experimenting with today are the Tactical Scalable MANET waveform, which is bringing data down to the forward tactical edge to the dismounted Soldiers and to the vehicles, and connecting those systems together so that everybody has awareness of where the others are,” Morris said. “You can send messages, lay down graphic overlays, mission data, et cetera, so that you’ve got better capability that previously was only available up at the command post.”

High-quality camera systems were also integrated into the Strykers and linked with IVAS, said Morris.

“The other piece we’re adding is 360-degree situational awareness,” said Morris. “We’ve added a variety of cameras to supplement the existing vehicle cameras. So instead of just having the gun camera and the relatively small forward and reverse cameras, now we’ve got high-end cameras all the way around the vehicle with both day and night vision. The Soldiers wearing the new IVAS technology are able to use those cameras and access them while they’re en route to mission. Instead of staring at a blank steel wall, they can keep up with what’s going on around the vehicle. They can also switch to a tactical map mode so they can see what’s going on around their broader mission area.”

The culminating event of the demonstration involved a platoon task force of five Stryker vehicles operated by 3rd Platoon, Blackhorse Company of 2-3 Infantry Regiment, 1-2 Stryker Brigade Combat Team carrying infantry Soldiers on a movement-to-contact and urban raid mission to seize and clear a building in Leschi Town, a training range at JBLM.

An operation of this size previously would have been conducted with a larger company-sized force, but the new expansion of IVAS increases capability such that one platoon can carry out the mission, according to Phillip Landan, assistant program manager and product lead for Ground Combat Product Integration.

Soldiers were given several surveys to fill out following each training exercise along with conducting after-action review meetings, giving direct feedback to the various offices and companies who are developing the systems so that their input can be used to improve the final product.

The increased capability was generally well-received by the Soldiers testing out IVAS, who have been training on it for the past two weeks leading up to the demonstration.

“When all doors and hatches in the Stryker are closed, I can see 360 degrees around my vehicle to check for IEDs, check where my other vehicles are and check their movement, and all of that has been a huge asset to us these last two weeks,” said Sgt. 1st Class Kyle Williams, third platoon leader for Blackhorse Company. “The situational awareness that I’m able to gain at a leader level from being able to see the icons for where all my [Soldiers] are means I can do route planning, I can do mission planning, I can publish graphical overlays, I can navigate with literally a turn-by-turn navigation feature, and I can send messages back and forth to the members of the platoon.”

This means that every Soldier can better contribute to accomplishing the mission, said Williams.

“It greatly enhances our ability to operate.”