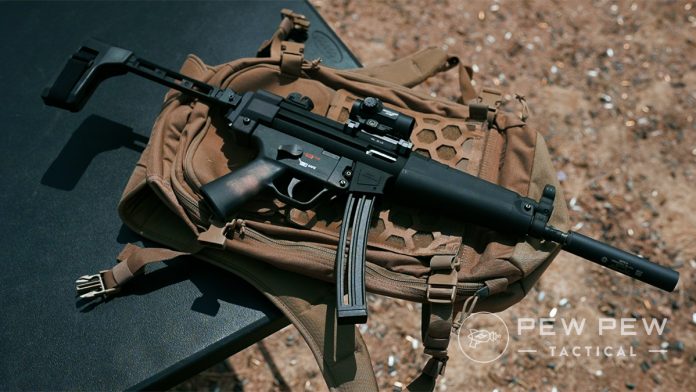 Over the last few years, we’ve seen a trend of .22 trainers gracing the market.

Recently, Heckler and Koch entered the fray with their rimfire version of what is arguably one of their most iconic weapons — the MP5.

The vaunted .22 LR is still one of the most affordable rounds out there, but does porting one of the most famous sub-guns into this caliber make it a great trainer or just a range toy?

That’s a question we intend to answer today. So keep reading as we dive into the specs, features, pros, and cons of this gun and get it out to the range.

H&K has created something very cool with their .22 LR versions of the MP5. Although it has limited applications, the pistol we tested ran well for a rimfire blaster and was a lot of fun to shoot. Those clamoring for that H&K experience will not find a cheaper route.

The MP5 has been around for a long time. It’s been made famous by both real-world incidents like the British SAS storming the Iranian embassy with them in 1980, as well as the movie, Die Hard from 1988.

Additionally, SWAT teams in the U.S. started to utilize them as a more compact entry weapon in the 1990s, further securing the gun’s status.

For more on this, check out Heckler & Koch MP5: A Pop Culture SMG Icon.

Most recently, H&K licensed the .22 LR version to Umarex, who made both a pistol and rifle version. The rifle version includes a faux suppressor and collapsible stock, while the pistol version has the triangular fore-end and sling attachment at the rear of the receiver.

There are admittedly limited applications for a semi-auto version of a submachine gun chambered in .22 long rifle.

H&K aficionados may thrill at the ability to own a relatively accurate yet affordable copy of the MP5.

Much of the controls and functions of the gun are similar to the original MP5. There could be an argument for the rimfire version being a trainer option that runs on much cheaper ammunition.

Otherwise, traditional roles for this caliber, besides plinking, are somewhat abandoned with this platform.

The MP5 in .22 manages to feel very similar to the original in its ergonomics and functionality.

The grip, magazine, fore-end, fire selector, and, of course, charging handle all speak to the experience of running an H&K.

The gun weighs about the same, too, coming in around 6 pounds. Umarex did a great job, as the overall experience is very authentic.

To those not versed with the MP5, it’s a submachinegun, something bigger than a pistol yet smaller than a rifle. It was designed for maximizing effective firepower in tight confines.

We removed the plastic capped sling attachment at the end of the receiver and added a Custom Smith Manufacturing end-cap in order to install an SB Tactical brace. They have other attachment points for the Tailhook.

This punched up the usability of the pistol without sacrificing concealability.

The standard ergos of the MP5 are interesting. The receiver is like many modern rifles but with a chunky fire selector being very easy to reach and operate on both sides of the gun.

Its magazine release in the receiver is anemic at best and a small target to reach — though there is another lever with this function in front of the trigger guard. Smaller hands will also struggle to reach the magazine release from the grip.

Running and slapping the charging handle has become an iconic move in itself, but it clearly wasn’t designed for left-handed shooters.

Granted, .22 LR can be a bit of a crap shoot. Despite this, and using a couple of different types of ammo, I was able to manage an average of 1-inch groups, shooting three rounds from 7 yards.

The trigger has a few millimeters of travel before hitting a well-defined wall. There, it breaks very sharply at an average of 4 pounds on a Lyman digital scale.

Trigger reset is most of the distance travel back and is very soft, barely audible or tactile. This isn’t a problem because the gun is fun to shoot, and you tend to blow through a magazine quickly.

The magazines loaded pretty easily thanks to a pull-down spring assist located on both sides. They also seated easily but required pulling to remove.

This gun stands somewhat unique in that it is a sub-gun chambered in .22 LR, and this alone is a somewhat limited category.

In addition, this is the cheapest version of the MP5 you are going to find — bar none considering the namesake is often thousands of dollars.

Over several hundred rounds of ammunition fired, I only experienced one double feed. After clearing this, it didn’t happen again. We ran Remington Thunderbolt .40 grain as well as Remington subs in .40 grain and had very reliable service despite a few failures of the ammo itself.

It has the familiar MP5 aesthetic, but some of the controls just don’t feel great — especially if you have smaller hands (or are a lefty).

Using the brace and running a Primary Arms SLx MD25, I was able to average 1-inch groups from 7 yards, and this is a solid performance for a .22 caliber pistol. Although I did not use the irons, the rear sight rotates through different apertures allowing the shooter to optimize for different distances.

The aftermarket out there is not only well supported for the standard MP5, but you may find Airsoft version accessories may offer some options to customize to your heart’s desire. The MP5 .22 also comes with a threaded muzzle with a 1/2×28 thread pitch so you can suppress those rowdy rimfire cartridges and stay hearing-safe.

The MP5 in .22 LR is thankfully not terribly expensive — prices range from around $400 to $500. If your intent is to collect or use it as a trainer, you need no justification. Otherwise, the purchase might be more difficult to justify as the gun’s design is fairly specific and doesn’t lend itself overly well to other traditional .22 applications like small game hunting.

Surefire makes a weapon light fore-end for the MP5, and there are some trigger upgrades for those who like to tinker or customize.

Changing out the fore-end has the potential to open up a lot of options if you use a Magpul MP5 handguard.

I’m often torn between the cool factor of guns and their real-world usefulness. This isn’t a home defender, it’s not for hunting, and its caliber restricts self-defense uses.

However, if you’re able to accept those limitations, what you’ll find is an authentic H&K MP5 that is accurate, reliable, customizable to your purposes…and a whole lot of fun to shoot!

Who’s picking up an MP5 in .22? Let us know in the comments below. And if you want to scratch that MP5 itch but rimfire won’t get it done, check out our article 5 Best MP5 Clones!