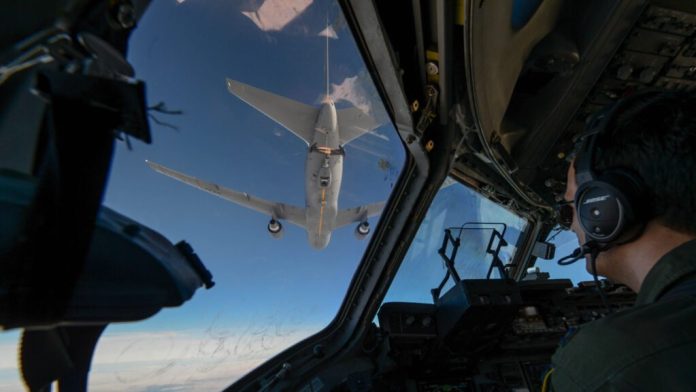 TEL AVIV — After months of delays, a handful of American KC-46A Pegasus refueling tankers finally will be making their way to the Israeli Air Force, according to a nearly $1 billion contract announced by the Pentagon.

The $927 million-ceiling contract, awarded to defense giant Boeing and announced Wednesday, provides for four KC-46A tankers to be delivered to Jerusalem by the end of 2026. The announcement came the same day that President Joe Biden had a 45-minute-long phone call with Israeli Prime Minister Yair Lapid, in which the two discussed “global and regional security challenges, including threats posed by Iran,” according to the White House.

Sources here said that during the call Lapid brought up urgent operational requirements, but the prime minister’s office told Breaking Defense today the specific issue of the KC-46A “was not discussed.”

The potential sale of eight KC-46s to Israel for some $2.4 billion was approved by the State Department back in March 2020, as Israel has been eager to replace its aging converted 707 tankers. But delays, including those caused by instability in the Israeli government, kept pushing the deal back.

“This contract further strengthens the U.S.-Israel alliance and continues the decades-long relationship between Boeing and the Israeli Air Force,” said Ido Nehushtan, president of Boeing Israel. “The KC-46A will benefit Israel’s efforts to ensure national security and regional stability.”

The KC-46 provides the ability to refuel Israeli and allied military aircraft, and relay data and enable rapid mobility for personnel, cargo and aeromedical missions. The platform features multiple layers of combat-ready defensive systems and countermeasures, including covert capabilities, to detect, avoid, defeat and survive threats, the company says.

Boeing builds KC-46A aircraft on the 767 production line in Everett, Wash. It is expected that most of the additional classified special systems required by the IAF will be installed in the production line, according to defense sources.

Relief and concern in Sweden after NATO deal with Turkey

Sorry, Axon, We Already Have the Technology We Need to Stop School Shooters