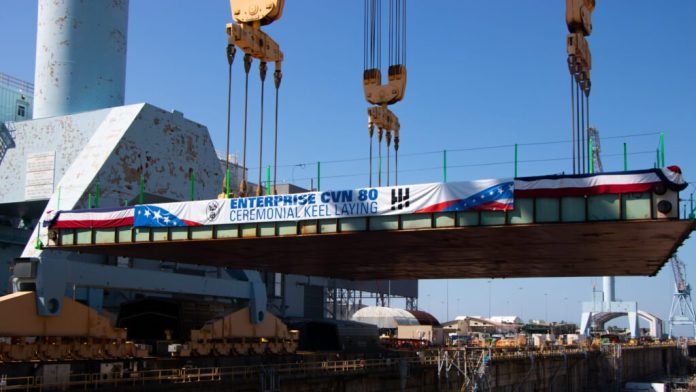 WASHINGTON — Amid an economy still recovering from the peaks of the coronavirus pandemic, HII’s Newport News Shipbuilding officials say a technology transition, years in the making, is helping them fight back against a difficult labor market.

When HII puts the latest USS Enterprise (CVN-80) in the water later this decade, it will be the “first time in our history, and I believe in the Navy’s history, that the ship isn’t just designed in a 3D [computer-aided design] tool, but now we’re taking that 3D information and putting it on to a digital device and allowing our shipbuilders to build with that,” said Brian Fields, NNS vice president for the aircraft carriers Enterprise and the next aircraft carrier to be built, the Doris Miller (CVN-81).

The 3D technology is part of a larger modernization push that also includes digitizing thousands of paper records and design documents, the pace of which has been determined by the time it takes to develop a software up to the task.

“We use an analogy: it’s like going driving around downtown [Washington] DC with a paper map versus [using] Waze,” Fields told reporters this weekend, referring to a popular navigation app for smartphones. “Why that’s so important is that with the amount of new shipbuilders that we’re bringing into the company now, and over the next five or 10 years, we see that their time to proficiency is collapsing.”

The technology’s proliferation, being used extensively to assemble the Navy’s next aircraft carrier inside the company’s dry dock sitting off the James River, is playing a key role in training newer employees entering the shipyard quicker, despite the increased difficulties in hiring while the country recovers from the damage done by COVID-19. “We’re able to give them harder jobs without the same oversight because they know what’s being asked of them,” Fields said of his employees.

The national labor shortage brought on by the coronavirus pandemic has been felt by most industries across the country, and shipbuilders are no exception. One of HII’s chief competitors in the world of US Navy shipbuilding, General Dynamics, told Breaking Defense in February that people were the company’s “biggest challenge” at its San Diego-based shipyard.

Shipbuilders are particularly vulnerable to spikes and dips in the labor market because the work, even at the best of times, often fluctuates year over year. When defense budgets are high and the Navy has lawmakers’ confidence, shipbuilders reap the benefits of having multiple vessels in production, which translates to the freedom to hire and train new workers en masse. But when budgets drop, so do the payrolls. That results in shipbuilders being forced to furlough or lay off people simply because there isn’t enough work in the pipeline to keep everyone busy.

It’s a difficult balance but one that the defense industry had become accustomed to attempting to strike. Then the coronavirus spread globally, and all bets were off.

“They started going out, [but] they’re not coming back in… By the end of the year, we’re down 10, 12 percent,” Giannini said of his own business, a valve manufacturing company.

The View From Inside The Dry Dock

While the shift from stacks of paper to laptops and tablets is theoretically a leap forward, that doesn’t mean it comes without growing pains. While speaking to reporters last Friday, the shipbuilders described the cultural challenges inherent in making the swap.

“You know, the thing is, these guys that have been here for 40 years, 30 years. They’re used to seeing it one way, so they’ve got to adapt to it,” said Rodney Taylor, an NNS foreman on CVN-80.

“But I do like the fact that when I’m planning, it goes a long ways. I can actually look at the work before I get my hands on it and get a better understanding of location [and the] requirements it takes to do the job. It helps out tremendously in that aspect, but… I’m still learning it myself,” he added.

Todd Meier, an NNS facilities engineer who served as a sailor on the old Enterprise (CVN-65) and worked on the vessel as a shipyard employee while it was being decommissioned, said that while the digital tools have helped train and qualify new workers, there are some tricks for doing the job that have to be experienced.

“There is an urgency to capture that skill set that goes out the gate every year due to retirement and attrition. And those skill sets can only be taught physically,” he said of the tricks and methods welders use to complete more difficult welds or reach hard to access areas.

How much these new tools speed up the final construction of CVN-80 and CVN-81, only time will tell. But the metrics are sure to be watched closely by both HII and the US Navy as both contemplate the possibility of another block buy for CVN-82 and CVN-83.

The Biggest Alligator Gar Ever Caught