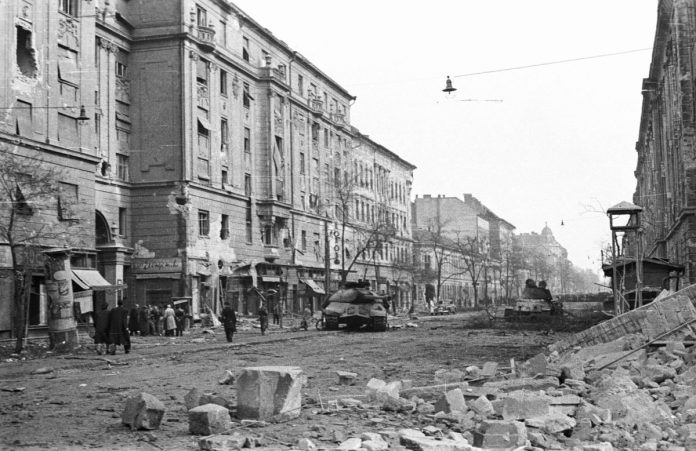 During the 1950s, the Soviets used a puppet government installed in the nation of Hungary, to rule with an iron fist. Tens of thousands of Hungarians were murdered during the “purges.”

A group of demonstrators gathered at the Radio Budapest building with the intention to seize the airwaves — demanding both free elections and the removal of Soviet troops from their country.

Unbeknownst to them, waiting inside the doors of that building were the secret police. As the demonstrators forced their way in, scores of them were arrested or shot.

This action further incited the citizenry, and thousands more soon showed up at the scene. And then an ambulance arrived…

Everything Is About to Change

The demonstrators noticed that the ambulance driver acted nervous. He claimed he arrived to treat injured people inside the Radio Budapest building.

Suspicious, the demonstrators threw open the ambulance doors to find the vehicle loaded with weapons for the secret police.

Enraged, the demonstrators armed themselves with the weapons intended for the secret police. And with that, the Hungarian Revolution began on October 23, 1956.

In response, the Soviets sent 31,500 troops and 1,130 tanks and other heavy guns, anticipating quickly quelling the uprising.

Realizing that the Corvin Passage was vital to their defense, the Hungarians quickly fortified the area — taking up firing positions to fight the tanks.

The narrow streets of the Corvin Passage and the high-rise buildings proved to be a nightmare for the Soviet heavy machinery.

The Hungarians were everywhere and the tanks couldn’t navigate the streets with any degree of efficiency.

Fire rained down on the tanks from the windows above, and many of the tanks were soon turned into columns of flame.

The success in taking out one of the premier armored vehicles in the world emboldened the Hungarians.

The Soviets weren’t invincible after all…

On October 25, thousands of unarmed civilians — including women and children — arrived at the Hungarian parliament building to protest the presence of the invading Soviet troops.

Soviets appeared with machine guns and opened fire on the crowd. An estimated 600 Hungarians ended up dead.

This further ignited the Hungarians to join the fight.

The End of the Revolution

Eventually, the Soviets realized that the battle for the Corvin Passage was over. They’d lost too many men and tanks. They needed to regroup.

They retreated from the area on October 29. They returned in even greater numbers in a matter of days and eventually won the war.

For the Hungarians, however, the Battle of Corvin Passage would forever be memorialized as a moment of heroism in pursuit of freedom.