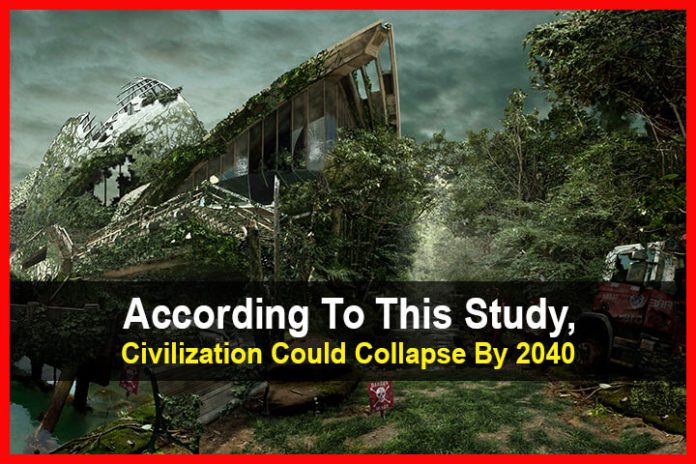 In 1972, a group of researchers from the Massachusetts Institute of Technology (MIT) released a computer-generated report at the Smithsonian Institution investigating five major trends affecting the future stability of world society.

The report was titled Limits to Growth and was inspired to some degree by Paul Ehrlich’s thesis put forward in his book The Population Bomb. Ehrlich predicted that the aggregate world demand for resources coupled with population growth would lead to future starvation.

Limits to Growth (LTG) went beyond general resource and population measurement to assess the future status of five critical factors or trends that define the success of society. The five trends measured and assessed included:

The foundation of the equation was simple. Any population needs certain products and services from food and water to housing, clothing, furniture, appliances, and in many industrialized countries – automobiles, TV’s, and new and emerging inventions and electronics.

The reality is that any product or service requires the use of resources to be produced or to function, and that the production of anything from electricity to food to automobiles results in varying degrees of waste products polluting the environment while depleting the supply of available resources.

Complicating matters is that as a population increases, its demands for more products and services increases. The fundamental question was: When does a society exceed its ability to provide fundamental and luxury goods and services because of diminished resources or excessive pollution?

The researchers made no assumptions about the end result and assumed it would simply indicate basic course corrections to manage growth in the future. They were stunned when the computer delivered conclusions indicating that the five factors would collectively lead to a collapse of global society around 2040.

The conclusion of the LTG report in 1972 stated:

If the present growth trends in world population, industrialization, pollution, food production, and resource depletion continue unchanged, the limits to growth on this planet will be reached sometime within the next one hundred years. The most probable result will be a rather sudden and uncontrollable decline in both population and industrial capacity.

Fortunately, it was only 1972 and it seemed like there was still time to make changes and alter the course of events. That wasn’t the case.

The report was greeted with significant criticism by four general groups:

As time went on, the report was somewhat forgotten by some and ignored by many. But then something curious happened. Disturbing follow-up reports confirmed the projections of the original 1972 study.

The most recent report on LTG took place in 2020 with an analysis by Gaya Herrington, then Director of Sustainability Services of KPMG US and was published in Yale University’s Journal of Industrial Ecology.

The 2020 study examined updated quantitative information about ten factors including the five trends in the original LTG report:

The 2020 analysis concluded that the Limits to Growth prediction is essentially correct in that continued economic growth is unsustainable under a “business as usual” model.

The new study found that current empirical data is broadly consistent with the 1972 projections, and confirmed that if major changes to the consumption of resources are not undertaken, economic growth will in fact peak and then rapidly decline by around 2030, with total collapse of civilization happening around 2040.

The telegram is that if we don’t change the way we live, eat, and buy all of the things that we’re used to doing without a thought, we will soon either be without them or not able to afford them. If that’s starting to sound familiar, it gets worse.

As the original indications of the 1972 analysis continue to be studied a glaring reality emerged. The original computer model was in fact highly optimistic in its projections. It did not include any measurement of:

What should give us pause is that many of the projections from Limits to Growth are occurring right now. What may be making them hard to see is the distraction of recent events.

The global population is months away from 8 billion, we’ve passed the point of peak oil (when oil production is easy and cheap as a resource), and we’re a few years away from 90% global deforestation of unprotected woodlands.

It’s so bad that scientists are now saying we only have a 10% chance of surviving the next few decades without societal collapse.

And the Distractions Continue

Instead of doing any of the actionable steps to achieve a sustainable society through the responsible management of population growth and resource usage, we’ve continually distracted by the media myopia of political bickering, advertisements for more things we don’t need, and the desperate need of many to cling to life and business as usual.

But Why Can’t Technology Fix It?

The promise of new and emerging technologies to solve all of our problems is a common argument for a business as usual approach to the way society functions today. It was one of the primary arguments for dismissing the conclusions raised in Limits to Growth.

The argument for technology is often summarized as the belief that our greatest resource is our resourcefulness. It’s the assumption that if we run out of something, we’ll find a substitute. But that misses a fundamental fact explored in Limits to Growth and that fact comes from the title of the study: “limits.”

Regardless of the brilliance of new inventions or innovations, they require new and old resources to be developed and result in new and additional waste products or pollutants as a result of their manufacture.

And their manufacture will also and ultimately exhaust the new resources while adding a new level of pollutants to the world’s ecosystem. Those are in fact the fundamental foundation elements of LTG as stated by its authors:

“Without substantial changes in resource consumption, the most probable result will be a rather sudden and uncontrollable decline in both population and industrial capacity”.

It’s not about changing the resource but changing our consumption of any resource. So what’s the Answer? In a word: “sustainability.”

Transitions to a Sustainable World

The world can respond in three ways to resource use and pollution emissions:

Unfortunately, the behaviors of the first way defined by disguise, denial and confusion seems to be our current approach to the realities of our limits to growth. Many of the limits analyzed in the original 1972 study have already been exceeded or “overshot” including population, pollution, and natural resources like oil.

Many of the voices calling for moderation in rapid growth are mocked and dismissed as doomsayers and survivalists. What’s unfortunate is that the planet those doomsaying survivalists meekly inherit will be a far cry from the paradise we once lived in and never really appreciated.

The only good news is that most survivalists know more than a thing or two about sustainability.

October 4, 1923 was the birthday of the late Charlton Heston