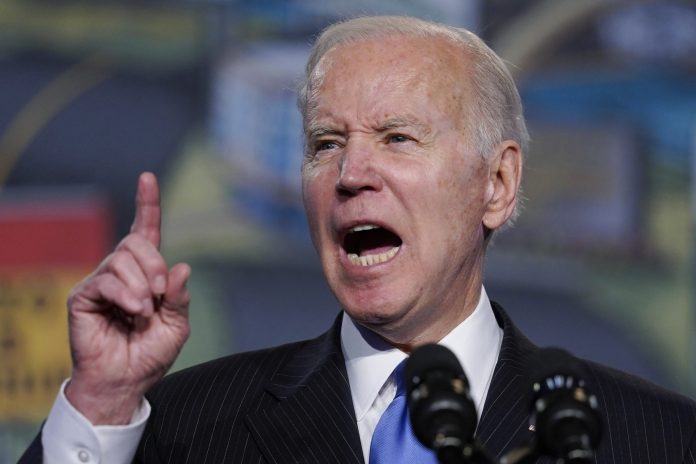 President Joe Biden is at it again. He’s throwing out wild and unfounded lies to scare Americans into supporting his push for an unconstitutional ban on modern sporting rifles (MSRs). If that’s not outlandish enough, he continues to antagonize and threaten war against American citizens simply for exercising their Constitutionally-protected rights.

As the president likes to say, “I’m not joking.”

His latest claim was yet another attempt to malign and villainize MSRs.

“Do you realize the bullet out of an AR-15 travels five times as rapidly as a bullet shot out of any other gun?” President Biden asked of the crowd in Wilkes-Barre, Pa.

Not true. First, President Biden fails to understand the difference between firearms and ammunition. The firearm, like an MSR which comes chambered in many different calibers, doesn’t determine the muzzle velocity of the projectile fired from the gun.

MSRs are commonly chambered to fire 5.56mm/.223 caliber ammunition. Those rounds travels between 2,700-3,100 feet per second (fps), an easily-verifiable fact that Fox News was able to uncover.

Fox and Breitbart both cited a Field & Stream report that examined bullet speeds of some of the fastest cartridges on the market used for hunting. Here’s what they found:

The 55-grain round from a 5.56/.223 caliber didn’t even crack the list. That’s not all though. President Biden repeated other debunked claims.

“You can’t go out and buy a cannon,” President Biden said in his Pennsylvania speech. It’s a throwaway line for him and one that’s patently false. He’s previously added in that Americans couldn’t buy cannons at the time the nation was founded.

Even The Washington Post gave him Four Pinocchios for that one, and no one looks to that news outlet to be defender of gun rights.

That ranks up there with his previous claim that a 9mm cartridge “will blow the lungs out of a body.” Breitbart fact-checked that with a retired Navy SEAL, someone who might understand terminal performance of bullets on the human body.

That was backed up by a federal agent with 15 years of experience. His answer – “bullsh*t.”

A 20-year federal agent told Breitbart it was “Not possible.” A 21-year-veteran of a U.S. Marshal fugitive recovery taskforce revealed, “That’s not even in the realm of possibility.”

“How many deer or bear are wearing Kevlar vests, huh?” President Biden asked deridingly. Again. “Not a joke.”

That, of course, is just not true. Retail firearm purchases are only completed after an individual completes a Form 4473 and the retailer completes an FBI National Instant Criminal Background Check System (NICS) verification.

That statement also diminishes rights for adults fully-vested in their Constitutional rights. The president – who has sworn an oath to uphold and defend the Constitution of the United States – is claiming that only the rights he approves should apply. That’s not how our Constitution works.

The president’s antipathy toward Americans who exercise their Second Amendment rights didn’t end there.

“If you want to fight against a country, you need an F-15,” President Biden said. “You need something a little more than a gun. No, I’m not joking.”

That statement was made after smearing those who remind the government the Second Amendment was written to prevent a tyrannical government from running roughshod over its citizens. For all the overheated rhetoric of media pundits frothing about a civil war, it seems strange that the president threatens the American public – about half of whom he called “semi-fascist” – with war.

NOW – Biden: “For those brave right-wing Americans… if you want to fight against the country, you need an F-15. You need something little more than a gun.” pic.twitter.com/ce3BJEEo7G

It’s not the first time, either. He made a similar statement in June 2021.

“If you wanted or if you think you need to have weapons to take on the government, you need F-15s and maybe some nuclear weapons,” President Biden said in a White House speech.

Newsweek reported that the president’s latest flippant F-15 remark was already viewed over 2 million times in less than 24 hours, drawing the ire of critics.

The president’s loose grasp of facts, willful ignorance of constitutional rights, veiled threats and explicit insults are a recipe for failure. Instead of pledging to ban commonly-owned firearms, President Biden should be focused on locking up criminals, instead of winking-and-nodding at progressive prosecutors releasing them onto America’s streets.

The Essential Guide to Hotel Safety While Traveling This Summer –

NSSF: There Are Now More Than 24 Million Modern Sporting Rifles in Circulation!