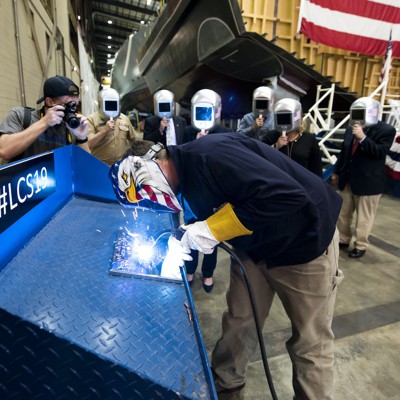 Construction begins on the Navy’s new frigates. The first steel for the guided missile frigate Constellation has been cut at Fincantieri Marinette Marine’s shipyard in Wisconsin, the company announced Tuesday. The news arrives about two years after the yard beat out a trio of competitors for the contract to build the first three Connie-class frigates. The company has spent the time upgrading its facilities to the tune of about $300 million, as well as designing the frigate itself. Officials say the design is about 80 percent complete as construction begins, “which is consistent with best practices across the naval shipbuilding industry.”

Plenty of questions remain about the program, many of which are explored in the Congressional Research Service’s newly updated “Report to Congress on Constellation-class Frigate Program (FFG-62).” Among those questions: Is the Navy lowballing the expected cost of the ships? CRS analysis suggests that “if FFG-62s were to wind up costing about the same to construct per thousand tons of displacement as other recent U.S. military surface combatants, then the third and subsequent FFG-62s could cost 17% to 56% more than the estimate for those ships shown in the Navy’s FY2021 budget submission.”

At last, a naval acquisition nominee: As the Navy has worked to persuade Congress that its budget and shipbuilding plans are on track, it has not been helped by the lack of a Senate-confirmed assistant Navy secretary for research, development, and acquisition. Twenty months after taking office, the Biden administration has finally nominated someone to fill the post: Nickolas Guertin, a four-decade veteran of naval systems engineering and acquisition who has since last December served as DOD’s director of operational test and evaluation.

Textile maker gets millions for upgrades. North Carolina-based Burlington Industries will receive $6.8 million to upgrade its factory equipment so it can make fabric for military uniforms better and more quickly, DOD announced Tuesday. The money will help “sustain and strengthen the domestic clothing and textile industrial base.”

Pratt & Whitney delivers 1000th F-35 engine. “Since delivering the first production engine in 2009, P&W has invested more than half a billion dollars in capital, process improvements, and cost reduction initiatives to support the production ramp and reduce the average unit cost of the F135 by more than 50%,” the company said.

Rocket maker gets contract to develop engine. The U.S. Air Force Tactical Funding Increase program will pay Colorado-based Ursa Major to develop “a flight-qualified 5,000-pound thrust, oxygen-rich staged combustion “Hadley” rocket engine, suited for both the booster and upper-stage phases of launch for satellites into low-earth orbit,” the company said. Cost and deadline were not announced.

More tanker orders for Boeing. DOD announced orders for 15 KC-46A tankers for the U.S. Air Force for $2.2 billion, and four for Israel for $928 million.

Thanks for reading the Defense Business Brief. Marcus Weisgerber will return next week.

The administration has used about three-quarters of the $40 billion Congress authorized in May.

As the U.S. and others begin traveling more regularly to the moon, the Pentagon will need to ramp up its extraterrestrial capabilities, experts say.

The Treasury Department and Ministry of Finance extend a year-old, tech-centric cybersecurity pact.

A 40-year-old war should not give China an arms-supply toehold in Latin America.