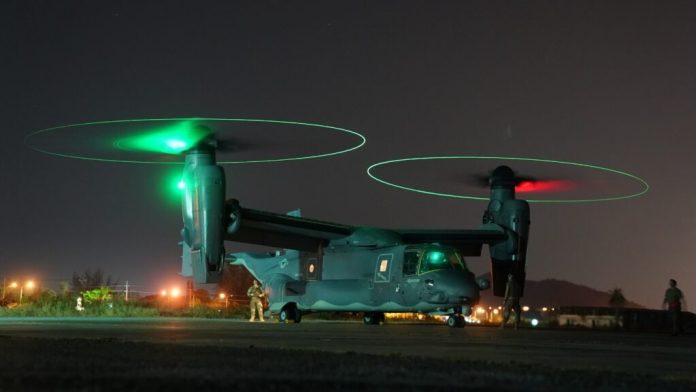 A CV-22 Osprey prepares to take off in a file photo. (DVDS)

WASHINGTON — Air Force Special Operations Command today cleared its CV-22 Osprey fleet to resume operations, but pilots will be required to operate using a series of risk-mitigation techniques in order to avoid a safety issue related to the engines on the rotorcraft.

Breaking Defense first revealed the AFSOC shutdown on Aug. 17. AFSOC Commander Lt. Gen. Jim Slife ordered the safety standdown in the wake of two safety incidents that had occurred over the previous six weeks, with a total of four such events occurring since 2017.

The problem in question, according to AFSOC, is a “hard clutch engagement” or HCE. Basically, the clutch inside a gearbox that connects one of the CV-22’s two Rolls-Royce Liberty AE1107C engines to the propeller rotor is slipping for an unknown reason. When that happens, the power load transfers nearly instantaneously to the other engine — a design feature that would allow the Osprey to keep flying even if one engine fails. Then, in most cases, the initial clutch re-engages, and the power load rapidly shifts back to the original propeller rotor and engine.

As a result of the rapid movement of power across engines, the aircrew is forced to land the CV-22 immediately, and a spokeswoman noted on Aug. 17 that “if the aircrew were unable to control the aircraft when the incident occurs, it could result in loss of control and uncontrolled landing of the aircraft.”

According to AFSOC spokeswoman Lt. Col. Becky Heyse, Slife made the decision to return to flight operations after gathering data and input from aircrews. All CV-22 aircrews took part in working groups led by the Joint Program Office, and a series of surveys were set up to give aircrews a way to provide direct feedback on the issue and propose possible solutions.

“Informed by analysis of the data and inputs from the CV-22 aircrew enterprise, Lt Gen Slife, AFSOC commander, authorized resumption of CV-22 flight operations Sept 2, 2022 with risk control mitigations in place,” Heyse told Breaking Defense. “These mitigation guidelines are focused on flight operations where the preponderance of HCEs were experienced. Until a root cause is identified, and solution implemented, the focus is on mitigating operations in flight regimes where HCEs are more prevalent and ensuring our aircrews are trained as best as possible to handle HCEs when they do occur.”

What does “risk mitigation techniques” mean in real terms? It’s a mix of changing how pilots takeoff, discussions with leadership ahead of a potentially risky missions and new training.

For instance, pilots will now be told not to push the throttle to full power on takeoff, but rather bring the power to full more slowly. Training simulators will be loaded up with more scenarios where the HCE issue occurs, in order for pilots to have experience with what to do in such an emergency situation. And when planning out an operation, a leader at the lieutenant colonel level or higher will have to lead a discussion about whether more risky techniques and maneuvers will be required, and what to do should an HCE occur during an operation.

“These mitigation guidelines are focused on flight operations where the preponderance of HCEs were experienced,” Heyse said. “Until a root cause is identified, and solution implemented, the focus is on mitigating operations in flight regimes where HCEs are more prevalent and ensuring our aircrews are trained as best as possible to handle HCEs when they do occur.”

However, the return to flight does not mean the Air Force is satisfied the clutch issue has been solved. Slife has set up a system of near-, medium- and long-term goals for solving the issue.

Near term, CV-22 maintainers are “completing one-time inspections to verify data within the Air Force maintenance information system and compare it to the components that are physically installed on aircraft,” per Heyse. The goal is to ensure the service has the most accurate, up to date information on the drivetrain component in question, which will be sent to both the V-22 Joint Program Office and contractor Bell-Textron.

Medium term, the service will review and analyze the data, and consider replacing drivetrain components once they reach “specific flight hours,” based on what the data says.

And long-term, the goal is to understand what is actually the root cause of the issue, and “finding and implementing a materiel solution.”

After the Air Force shutdown, the Marine Corps, which also operates a V-22 variant, declared it would not be shutting down its fleet.

“The hard clutch issue has been known to the Marine Corps since 2010, and as such, we have trained our pilots to react with the appropriate emergency control measures should the issue arise during flight,” the service said in a statement Aug. 18. “We also remain engaged with the joint program office, NAVAIR engineering, and our industry partners to resolve the issue at the root cause.”

It is worth noting that the operational profile for the Air Force and Marines are different. Where the Marine Corps primarily use their MV-22 for transport, the Air Force Special Operations Command CV-22 is used for missions such as infiltration or exfiltration in dangerous environments, requiring a different flight profile.

Valerie Insinna in Washington contributed to this report.

M1 Garand Iron Sights On An AR-15 -The Firearm Blog