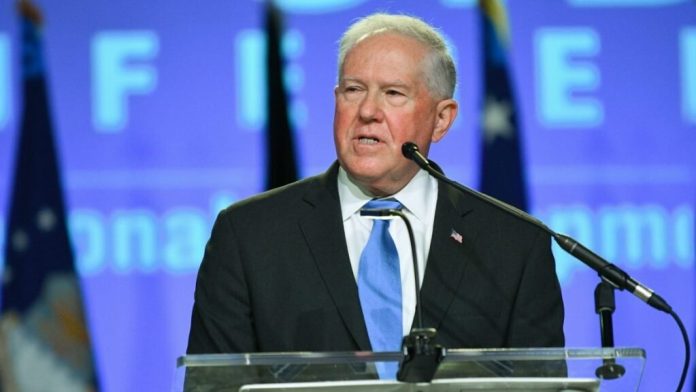 WASHINGTON — With the Pentagon’s No. 2 official calling for additional oversight on Joint All Domain Command and Control (JADC2) efforts and other officials repeatedly expressing concerns about the lack of coordination between the military services, there is a growing sense that if JADC2 is to ever become reality, a specific point person is needed to pull everything together.

In comments this week, Frank Kendall, the Air Force Secretary, gave a clear sign about who might fill that role: the department’s Chief Digital and AI Officer (CDAO) Craig Martell, who joined the department April 25 straight from the commercial sector.

Speaking at the Department of the Air Force Information Technology and Cyberpower (DAFTIC) conference on Tuesday, Kendall said that Deputy Defense Secretary Kathleen Hicks has already asked Martell to take a leading role in the discussions about JADC2, which seeks to finally break down the walls between the military services when it comes to joint operations.

“So the deputy has asked the new Chief [Digital] and AI officer, whom I just had a conversation with a few days ago, to basically pull all this together and help organize it,” Kendall said. “And I think [Undersecretary of Defense for Acquisition and Sustainment] Bill LaPlante … and the [Chief Information Officer] John Sherman are all going to be a part of that as well. But I think it’s going to be led by the new Chief [Digital] and AI Officer, Craig Martell, who comes to us from industry and has a very good technical background. Hopefully he’ll be able to help pull it together. But there’s a definite need to do that.”

Officials within the department have been increasingly vocal about the need to better manage JADC2 efforts across the military services. The Air Force has its Advanced Battle Management System, the Army has its annual Project Convergence exercise and the Navy has its own Project Overmatch.

Earlier this month, Deputy Defense Secretary Kathleen Hicks told reporters she wants more high-level oversight when it comes to JADC2, FedScoop reported, and spoke about the CDAO’s role in the effort.

“He’s not going to create, you know, a ship plan, you know, a blueprint that says JADC2 structure — this is how we’re going to build it,” Hicks said on Aug. 18. “He is doing it from a software-centric approach and there’s going to be, sort of, the bottom-up from the services plugging in, and particularly at that tactical level. They’re doing a lot of really good things, but we’re going to be able to bring some top-down structure into that, in the integration capability.”

During the same event, Gen. CQ Brown, chief of staff of the Air Force, said Tuesday at the DAFTIC conference he’s concerned the different efforts between the services aren’t aligned. The services also need to work on accessing and being able to share data, he added.

“So back on the 24th of June, I hosted an event with the other service chiefs to talk about JADC2 because I have a concern that, you know, we’re doing Advanced Battle Management System, there’s Project Convergence, there’s Project Overmatch and what we don’t want to do is diverge too much,” Brown said. “We don’t necessarily need to be all the same. We need to align to make sure we’d be able to move information back and forth between ourselves and be able to have access to the data.”

The remarks from both Hicks and Brown echo those made by several service officials within the last few months about the lack of coordination surrounding JADC2.

On July 11, Doug Bush, the assistant secretary of the Army for acquisition, logistics and technology, floated the idea of a new, high-level JADC2-focused office along with a large-scale exercise to help focus the different efforts between the services. Bush likened the envisioned office to the Joint Counter-small Unmanned Aircraft System Office, which is overseen by the Army, to help prioritize investments from a joint perspective.

Later that month, Air Force Cyber Advisor Wanda Jones-Heath agreed with Bush’s proposals and said that between the separate efforts within the services, no one is thinking about how to be interoperable and that “someone needs to just push us where we need to go.”

She also said the JADC2 Cross-Functional Team (CFT), designed to help ensure requirements are met and to deconflict between the services, isn’t driving the amount of interoperability the Pentagon needs.

“How much are they driving to make sure there is interoperability and that we get the capabilities that we need, putting those programs side by side and just figuring out what capability can each service bring, what are the best of breed of the different capabilities, and then how do we integrate those?” Jones-Heath told Breaking Defense at the sidelines of a July 27 Potomac Officers Club event.

But just a few weeks later, the new head of the JADC2 CFT, said she cringed at reports saying services’ efforts weren’t aligned.

“JADC2 is an ecosystem. When we see in the press that the services aren’t aligned behind JADC2, I cringe,” Rear. Adm. Susan BryerJoyner said Aug. 18 at the AFCEA TechNet Augusta conference. “Because at the end of the day, what each one of the services is doing is absolutely part of JADC2. They’re approaching different pieces of the problem that need to be solved. They’re not incompatible. They’re complimentary.”