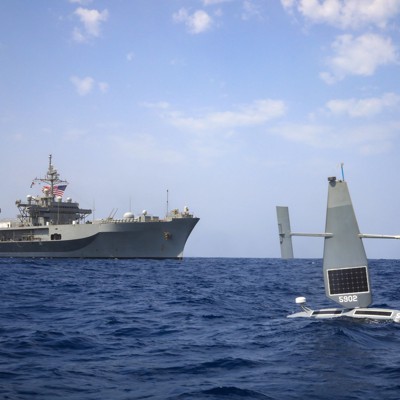 For the second time this week, an Iranian warship tried to steal American unmanned surface vessels, but were stopped by U.S. destroyers, which retook possession of the drones 18 hours after they were seized.

The Islamic Republic of Iran Navy ship Jamaran took two Saildrone Explorers that were operating close to one another in the Red Sea, at about 2 p.m. Thursday local time, according to a Friday statement by U.S. 5th Fleet. The command said it “detected” the Iranian ship as it moved to the drones and hauled them from the water.

According to a U.S. defense official who spoke on condition of anonymity, the Nitze sent a MH-60R Sea Hawk helicopter ahead to the Iranian ship as the destroyers made their way to intercept. The helicopter crew spotted  the Saildrones on the ship’s deck, but as they approached, the Iranian crew began to throw tarps on top of them “to try to hide the fact that they had seized these unmanned vessels.”

The two destroyers arrived and stayed in the area, speaking with the Iranian ship “to deescalate the situation and recover the seized Saildrones,” 5th Fleet said.

The Iranians eventually said that they had been told by their headquarters to return the vessels, the defense official said, but they wanted to wait until the sun came up. The drones were released at 8 a.m. local time Friday morning, according to 5th Fleet.

Reuters reported Iranian state television claims that their navy took the vessels to prevent an accident, and returned them after the shipping lanes were secured.

In what appears to be a rebuke of those statements, 5th Fleet said the Saildrones “posed no risk to naval traffic and had been operating in the general vicinity of the Southern Red Sea for more than 200 consecutive days without incident.”

“The unmanned surface vessels were unarmed and taking unclassified photos of the surrounding environment while loitering in an assigned patrol area at least four nautical miles from the nearest maritime traffic lane,” the statement said.

The attempted theft comes just days after an Islamic Revolutionary Guard Corps Navy support ship tried to tow away another Saildrone in the Persian Gulf before being intercepted by forces from 5th Fleet. The incident Monday was the first time anyone had tried to steal one of their unmanned vessels, Cmdr. Tim Hawkins, a spokesman for 5th Fleet, said at the time.

It’s unclear why Iranian forces have started attempting to steal unmanned surface vessels in the region. The Saildrone Explorer carries commercially available “sensors, radars, and cameras for navigation and data collection,” and stores no classified or sensitive information, according to a 5th Fleet statement about the Monday incident.

“This appears to be a deliberate act to escalate this situation after Iran was unsuccessful in capturing the very same type of vessel in the Arabian Gulf,” the defense official said.

The incidents come as diplomats from Washington and Tehran are working to bring back the 2015 nuclear program agreement. On Thursday, the U.S. received a response from Iran regarding the wording of a new deal, but found that their proposal “is not constructive,” a State Department spokesman said in a statement, the Washington Post reported.

Asked what will be done to prevent this from happening again, the defense official said “we constantly evaluate the operating environment and you make adjustments,” but they would not speak about force protection measures due to operational security concerns.