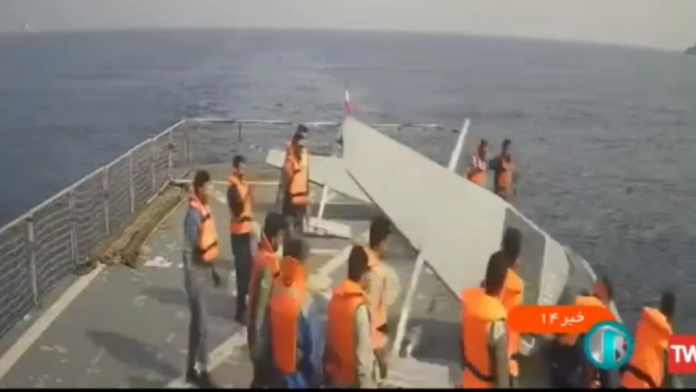 WASHINGTON —  A video from Iranian media appears to show Iranian navy sailors unceremoniously tossing two American unmanned surface vessels overboard in the Red Sea, just days after the US Navy said it had prevented a different Iranian vessel from seizing a similar drone.

In the video, aired by an Iranian state media outlet and then circulated on social media, a group of sailors wearing life jackets aboard the Iranian navy’s destroyer Jamaran are seen pushing two Saildrone USVs over the side. Another unidentified ship can be seen in the background.

Iranian Navy IRIS Jamaran has seized & released 2 US Navy Saildrones USVs in the Red sea. They claims the 2 were blocking international waters & were released after taking them to a safe loation.
I think US Navy Arleigh Burke class destroyer can be seen in the video on the right. pic.twitter.com/LghlzjjoqX

The Associated Press reported that the incident occurred today and that Iran claimed it warned an American destroyer about “several unmanned spying vessels abandoned in the international maritime routes” before ultimately releasing the drones in what it called a safe area.

Cmdr. Tim Hawkins, a spokesman for US 5th Fleet, in a statement subsequent to this story’s publication said the Navy intercepted the Iranian warship after it had detained the Saildrones. The USVs were “unarmed and taking unclassified photos” of the environment while loitering “at least four nautical miles” from the nearest maritime traffic lane, Hawkins said.

Two American destroyers operating nearby, as well as an MH-60R Sea Hawk, arrived and began communicating with the Iranian warship until the latter eventually released the USVs.

“The [USVs] posed no risk to naval traffic and had been operating in the general vicinity of the Southern Red Sea for more than 200 consecutive days without incident,” Hawkins said.

The incident comes just days after a support ship crewed by the Islamic Revolution Guards Corps (IRGC) Navy attempted to seize a different Saildrone USV while it was transiting the Arabian Gulf. The US Navy, which released two surveillance videos of that incident, at the time said it was able to intervene, resulting in the Iranian ship releasing the towing line it had attached to the USV.

Iranian news reports, in turn, shot back at US Central Command’s statements, labeling them as “ridiculous allegations.” The reports also said the IRGC claimed it took “timely and vigilant measures… with the aim of maintaining safety of the shipping routes.”

The Jamaran, the ship involved in the more recent event, is part of Iran’s regular navy while the IRGC is a paramilitary force.

10 Things That Will Be Extremely Valuable After An EMP