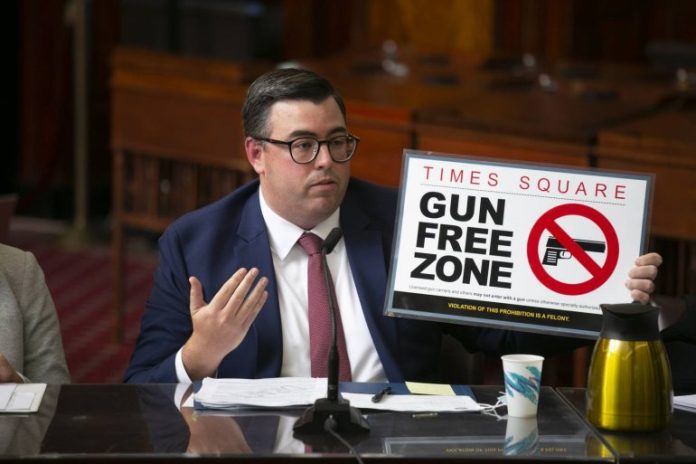 The city and state of New York continue to thumb their noses at the US Supreme Court’s Bruen decision, expanding the number of prohibited “sensitive” locations and generally ignoring the rule of law.

On Tuesday, the NYPD’s top legal eagle showed off the Big Apple’s new “Gun Free Zone” sign that the city’s galaxy brains dreamed up to ensure that no one carries a firearm where the city prohibits it. Because “gun-free zone” signs have worked so well in the past.

The cops are copying signs declaring Times Square’s gun-free status after local lawmakers banned firearms in the Crossroads of the World.

Robert Barrows, the NYPD’s executive director of legal operations, held up one of the signs — which screamed “GUN FREE ZONE” — at a City Council hearing on Tuesday focused on securing sensitive spaces after the Supreme Court gutted the state’s concealed carry handgun law.

With gun control laws falling left and right, it’s just a matter of time until fresh new lawsuits throw out these punitive gun control laws New York rammed through as after the Bruen ruling was handed down.

Eventually, the rule of law shall prevail.

In the mean time, New Yorkers and the city’s visitors can bask in the comfort and security of knowing that Times Square is one place in the city where criminals and terrorists absolutely will not be able to carry a gun. Because it says so right there in big, bold letters.