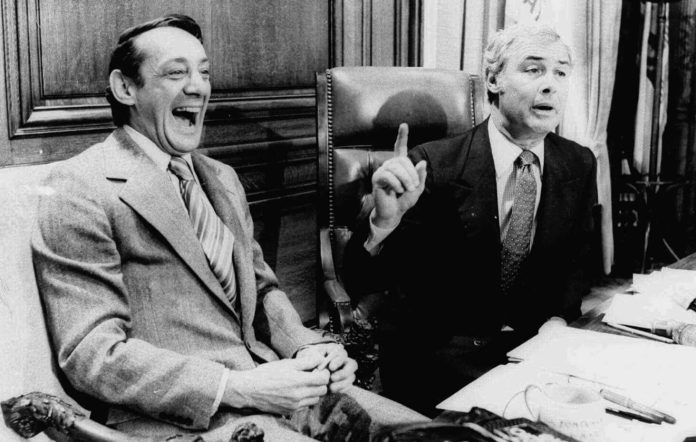 Dan White was a baby boomer born in 1946 in Long Beach, California, the second of nine children. Though he was expelled in his junior year of High School for violence, he later transferred to another school and graduated as valedictorian. In 1965, White enlisted in the Army.

White was assigned to the 101st Airborne Division as an NCO and served a year in Vietnam. He left the military in 1971 and became a police officer in San Francisco. He purportedly quit the force after reporting a fellow officer for beating a handcuffed suspect. White then joined the San Francisco Fire Department. His rescue of a woman and her baby from a seventh-floor apartment during a fire was the sort of stuff of which heroes are made.

White parlayed his experience as both a cop and a fireman into a budding political career. In 1977 he was elected to the San Francisco Board of Supervisors. During his tenure, he served alongside a youthful Dianne Feinstein and Harvey Milk.

The Saga of Harvey Milk

Harvey Bernard Milk was born in New York City in 1930, the son of Lithuanian parents. Milk was known as an outgoing extrovert in school—the class clown. He played football and was an opera enthusiast. He studied mathematics in college and subsequently entered the US Navy.

Milk served as a diving officer assigned to the submarine rescue ship USS Kittiwake. After a stint portside as a diving instructor Milk was removed from the military via an “Other Than Honorable” discharge for homosexuality. Milk then hopped through several jobs and multiple gay relationships in various cities across the country.

Milk eventually settled in San Francisco. He worked for a time for an investment firm before being fired for growing his hair long in protest of US combat operations in Cambodia. After several failed local election attempts Milk was appointed to the city Board of Permit Appeals in 1976 by San Francisco Mayor George Moscone. This appointment made Harvey Milk the first openly gay city commissioner in the United States.

George Moscone was a San Francisco native of Italian heritage. His dad had been a prison guard at San Quentin. Moscone attended law school, got married, and also served a stint in the Navy. After a term on the San Francisco Board of Supervisors, Moscone was elected to the California State Senate.

Moscone’s time in the State Senate saw him sponsor a statewide school lunch program as well as the law that legalized abortion in California. Throughout it all, he developed a reputation for championing gay rights. In 1975 he was elected Mayor of San Francisco, beating out conservative John Barbagelata as well as Dianne Feinstein.

The success of Moscone’s campaign turned on a grassroots effort funneled through a variety of local churches. Among them was the People’s Temple, the suicide cult run by charismatic charlatan Jim Jones. You can read more about Jim Jones and the Guyana Massacre here. In recognition of his support, Moscone later appointed Jones as Chairman of the San Francisco Housing Commission.

Dan White and Harvey Milk were initially political allies. Despite their wildly disparate backgrounds, they were both ardent Democrats and enjoyed a compatible ideology. Disagreements over business development issues and ultimately Milk’s placement of a controversial group home in White’s district eventually drove a wedge between them. Their conflict was eventually seen as a bitter proxy fight between traditional family values and gay rights.

White’s supervisor job paid $9,600 per year ($40,200 today). A local ordnance prohibited any one individual from holding two city jobs simultaneously. As a result, White was forced to resign as a firefighter. He tried to start a business selling baked potatoes from a cart, but this endeavor failed. With a wife and three children to support this created a financial burden. Frustrated with his lack of money as well as the labyrinthine machinations of San Francisco politics, Dan White submitted his resignation as Supervisor to Mayor Moscone on November 10, 1978.

The rules were such that the Mayor appointed a temporary successor after a Supervisor resigned. White’s vacancy insured that the Mayor could stack the board with a majority that was warm to his agenda and potentially hostile to local business. Under pressure from his constituents, White approached Moscone and attempted to rescind his resignation.

Mayor Moscone and Harvey Milk saw White’s departure as an opportunity. Milk pressured Moscone not to re-seat White. Moscone subsequently announced that he was appointing Don Horanzy to the position, a farther-Left local politician.

A bit more than two weeks after his resignation White had an unsuspecting friend drive him to City Hall. In his pocket, he carried the loaded Smith and Wesson Model 36 .38 Special revolver he had used as a police officer along with ten loose rounds of hollowpoint ammunition. Given the fulminant nature of San Francisco politics, metal detectors had recently been installed at the entrances to the building.

White entered the structure through an unlocked first-story window. Apparently, city officials frequently came to work by this means so as to avoid the waits at the detectors. There’s a message there, but we lack the space to explore it today.

Mayor Moscone was in a meeting with Willie Brown who would himself eventually go on to become Mayor of San Francisco. After Brown departed, White confronted Moscone, again demanding he be given his old job back. Not wishing to make a scene, Moscone invited White into a private lounge attached to the Mayor’s office. Once behind closed doors Moscone lit a cigarette and poured drinks.

Dan White was a trained soldier, a combat veteran, and an experienced police officer. He knew how to run a gun. White drew his revolver and shot Moscone twice, once in the shoulder and again in the chest, perforating the man’s lung. White then shot Moscone twice at close range through the ear, killing him. Bystanders later reported that they took the sound for a car backfiring.

As White left the office Dianne Feinstein recognized him and called his name. White responded with, “I have to do something first.” He then sought out Harvey Milk and caught him in a hallway before inviting him into a private office.

White closed the door, produced his pistol, and opened fire. His first round passed through Milk’s wrist, while the next two struck him in the chest. The fourth hit Milk in the head. As before, White then fired his final shot into Milk’s skull at close range. Feinstein entered the office as White left and discovered Milk’s body.

The Smith and Wesson Model 36 is likely the most popular snub-nosed revolver ever produced. The name Chief’s Special spawned from a popular vote conducted at the International Association of Chiefs of Police Convention held in 1950. Barrels could be had in either two or three-inch versions, and the gun carried five rounds onboard.

Serial number 337 was engraved with J. Edgar Hoover’s name and given to him as a gift. An aluminum-framed version was called the Airweight. A variant specifically marketed for female shooters was titled the LadySmith. The gun remains in production today.

Dan White walked out of City Hall unmolested and eventually surrendered to Frank Falzon, a fellow detective from his days with the SFPD. He acknowledged shooting Milk and Moscone but denied having planned the attack. White was charged with murder in the first degree with special circumstances, making him eligible for the death penalty.

White’s legal team claimed that he was caught in the throes of depression and therefore not responsible for his actions. They explained that White, previously a bit of a fitness fanatic, had given himself over to junk food. Subsequent myths perpetuated in the media asserted that his lawyers were alleging that the junk food caused a mental break. This led to the popular term “Twinkie Defense” in the newspapers of the day. In reality, they were just claiming that the junk food addiction was evidence of his altered mental state, not its cause. Regardless, the jury inexplicably bought this bizarre story. If ever you should choose to assassinate your political rivals in cold blood in a public place, apparently you might want to do it in California.

Jurors purportedly wept when his confession was played in the courtroom. White was subsequently convicted of voluntary manslaughter and sentenced to seven years in prison. He was paroled after five, lost his family, and killed himself via carbon monoxide poisoning in his garage two years later.

A Point of Personal Privilege

Harvey Milk endured discrimination, served in politics, and was gunned down in cold blood by an unhinged lunatic. In 2009 President Obama awarded Milk a posthumous Presidential Medal of Freedom. On November 6, 2021, the US Navy launched the USNS Harvey Milk, the second of the John Lewis class of underway replenishment oilers. As martyrs go, I’d say he’s earned his accolades.

Most thinking folks agree that no one should undergo discrimination. However, ours is a cruel, violent species. There has never since the dawn of time been fairness or equality in a human culture to compare with what we enjoy today. The pursuit is a noble goal to be sure. However, it seems to me we should spend more time being thankful for what we’ve accomplished and less screaming at each other about how horrible things are.

I grow weary of our current unhealthy fixation with sexual practices. In my perfect world, people would be judged based upon what they accomplished or how they’ve made the world better, not with whom they slept or what kind of clothes they wore. Sex is a fairly straightforward primal thing, and most people can do it. The details do not reflect any extraordinary accomplishment. Would it be too much to ask if we just treat everybody nicely and focus on something more substantive for a change?

Along with new weapons for Ukraine, US sets up $2.2B FMF pot for European nations