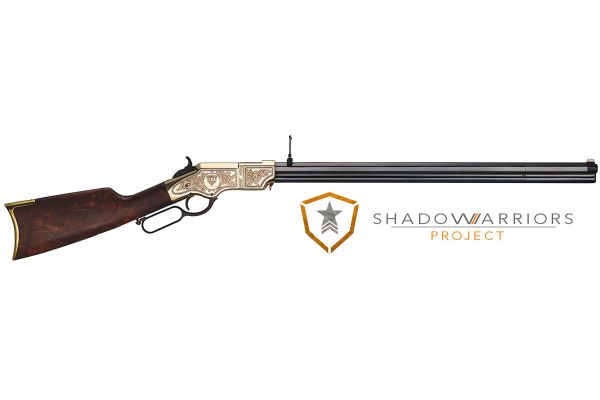 Henry Repeating Arms, one of the country’s leading firearm manufacturers, is proud to announce its latest Guns For Great Causes campaign with the donation of a one-of-a-kind New Original Henry Rifle to benefit the Shadow Warriors Project, co-founded by speaker, best-selling author, and former private military security contractor, Mark “Oz” Geist. The ornately engraved firearm is currently up for auction on Gunbroker.com, with 100% of the proceeds from the winning bid going directly to funding Shadow Warrior Project’s endeavors. Early estimates suggest the auction could exceed $50,000.

Mark Geist served in the United States Marine Corps for 12 years before deciding to extend his service to the country as a special operative contractor, where he became part of an elite security team for a CIA outpost in Benghazi, Libya. This facility would become the target of the Islamic militant group Ansar al-Sharia on September 11, 2012, and Geist is credited with saving the lives of 25 Americans during the siege. The actions of Geist and the rest of his team are depicted in the New York Times best-seller, 13 Hours: The Inside Account of What Really Happened in Benghazi, and a feature film titled “13 Hours: The Secret Soldiers of Benghazi.”

Shadow Warriors Project was started by Geist and his wife Krystal after he returned home mentally and physically injured, unable to work, and with no official support programs due to his status as a private contractor. Unlike active military members or veterans, there is no post-engagement support for private security contractors returning from battle overseas. The Shadow Warriors Project’s goal is to serve as a lifeline by offering financial assistance for medical bills, PTSD treatments, and other necessary rehabilitation to ease the transition into everyday civilian life. It is the only organization of its kind. Beneficiaries of the foundation are private military security contractors hired by the CIA or private firms that have conducted paramilitary security operations in some of the world’s most volatile locations.

“To learn about Mark’s service and understand what he and his brothers have gone through before, during, and after the 2012 Benghazi attack is humbling and nothing short of awe-inspiring,” says Henry Repeating Arms CEO and Founder Anthony Imperato. “Henry Repeating Arms wholeheartedly backs Mark and Krystal’s valiant mission and any organization dedicated to bettering the lives of those who sacrificed so much for our freedom and liberty. We pulled out all the stops for this rifle, so now my fingers are crossed for an auction record.”

Henry Repeating Arms is donating one of the most exclusive rifles ever built in the company’s history, a custom 1-of-1 Shadow Warriors Project edition New Original Henry Rifle featuring hand-chased engraving and rare exhibition-grade American walnut furniture. The rifle bears the Shadow Warriors Project emblem on one side of the hardened brass receiver, the Seal of the President of the United States on the opposite, and a unique custom “SW911” serial number. Flourishing leafy-vine scrollwork and a scalloped border fill out the embellishments on both sides of the rifle.

Besides using modern materials to accommodate contemporary ammunition, the rifle is accurate to Benjamin Tyler Henry’s 1860 patent for the first successful repeating rifle and one of America’s most legendary contributions to the international stage of firearms design. Features include a one-piece octagon barrel and 13-round tube magazine that are deeply blued and highly polished, a polished brass crescent buttplate with a period-correct “trapdoor” compartment, a folding ladder rear sight and brass blade front sight, and a traditional half-cock safety mechanism.

The online auction, available at gunbroker.com, concludes on Friday, September 16th at 9:00 AM Eastern. All firearm sales must ship to a federally licensed dealer.

For more information about Henry Repeating Arms and its products, visit henryusa.com or call 866-200-2354 for a free catalog.

Henry Repeating Arms is one of the leading rifle and shotgun manufacturers in the United States and a world leader in the lever action category. The company motto is “Made in America, or not made at all,” and its firearms come with a lifetime guarantee backed by award-winning customer service. The company is also known for its Guns For Great Causes charitable program, which focuses on assisting the families of sick children, children’s hospitals, military veteran organizations, Second Amendment advocacy groups, and wildlife conservation organizations. The company currently employs over 550 people and has over 330,000sf of manufacturing space in its Wisconsin and New Jersey facilities. The company is named in honor of Benjamin Tyler Henry, who invented and patented the Henry lever action rifle in 1860 – the first practical repeating rifle and America’s unique contribution to the international stage of firearms design. Visit Henry Repeating Arms online at henryusa.com, on Facebook at facebook.com/HenryRepeating, and @henry_rifles on Instagram.

Best Fishing Lines for Bass of 2022