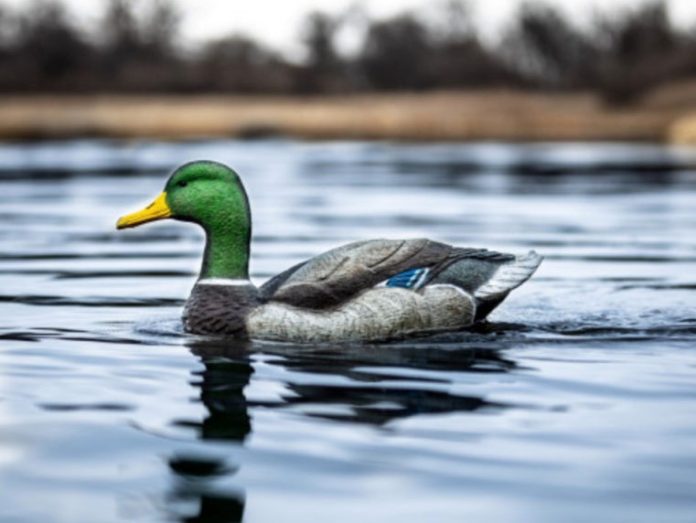 The idea of motion in your decoy spread continues to be both arguable and agreeable.  I believe a transition in motion is integral to success so let me walk you through the changes with migration and innovation as drivers.

Most will agree in the early season and with those hunting ducks further north, spinners are indeed a must.  Their ability to be seen for miles in some cases makes them one of the top attractors of the last 15 years.  Often though, as the season moves along the spinner might take a less important role or one that is more temporary in the spread.  By that I mean, that rather than being used simply as an attractor they might become more of a flight director and can be used to change the flight paths of ducks to benefit the hunter.  So even within the realm of spinners, we have adapted their usage to best supplement our spreads and most importantly attract and trick ducks to our decoys.  Check the link for more on spinners.

The second tier of motion engages the water surface in the form of agitators providing motion on the water not just above the water.  On those calm mornings or days when decoys don’t move you have a choice of a jerk string or an innovative agitator that spits plumes of water over a dabbing ducks tail making the water explode with ripples.  One in the spread is good, but several make even more capillary action giving the surface the look of lots of live ducks feeding.

Let’s back up real quick and think through the process of attracting ducks to your decoys.  The starting point was a spinner or several spinners attracting ducks from perhaps miles away.  Once they get close it might be a choice to turn them off to avoid spooking the ducks.  As I started this article I mentioned how arguable motion can be in the spread as some will say turn them off and others will say leave them on.  I know I have done both, but young ducks and grown ducks, spared the shock of being shot at, will be most likely to come close to the spinners.  Those that have seen spinners from Saskatchewan to Louisiana will be more likely to spook away and prefer a more quiet decoy zone.  It takes practice and time to figure out the perfect formula.  But we do all agree if you are on the X you typically can do no wrong.

As I mentioned, the second tier of motion being agitators may cause conflict if they stay on or are turned off.   I consider these to much less a degree of concern, but once again as the ducks get spooky even that kind of water movement can be too much.  As hunters, we have to begin to figure out what is enough and what is too much, but for spinners and agitators, I argue both can be overdone.

Enter the swimmer. Lucky Duck has a new swimmer on the market that might just be the next greatest decoy in your spread.  Certainly, many of you have been using some form of swimmer, but likely not with the technology incorporated in this decoy.  I see their swimmer as a huge compliment to a spread and one that may have the least amount of conflict with all types of duck manners.  As the third tier of motion, the swimmer is one that can be left on, as it most resembles the swimming motion of ducks on the water.  I have seen nothing close to this decoy in respect to its versatility and capability.  Let me add one more bit of learned knowledge.  Seems like more often than not in the excitement of the decoying ducks, one forgets to turn off the spinners and agitators thus making the birds uncomfortable with your spread and perhaps flaring.  I don’t see this as an issue with the swimmers as again it is so natural to the spread.  So forgiving might be a choice word.

A word for the Lucky Duck Swimmer is powerful.  The pump system is the same as their agitators and even the directions say be sure to use at least an 8-ounce weight or it might pull away.  In addition, the swimmer has an onboard system of random timing so if more than one is in the spread they will operate independently and look more natural.  Powered by an 11.1V Lithium Ion battery the swimmer can operate for hours, sometimes even days.  Another feature is the remote control.  This is compatible with all Lucky Duck remotes, but I believe school is still out on whether it needs to be remotely operated.  Couple a long-life battery with a natural swim movement and there may be no need to ever turn one off!

Let’s summarize and all agree we have times we feel that motion over the water and on the water are both useful and detrimental.  If there was a magic answer to when this fits I wish I had it, but I know if I see ducks spooky, know they have been shot at, and see them flaring, I need to react by turning off some motion.  But the swimmer may be the first to do something really magic in your spread and be the most forgiving.

About the author:
David R. Vaught, Ph.D. began hunting waterfowl at a young age due to his father being a waterfowl biologist for the Missouri Department of Conservation. Today he hunts both public and private waterfowl grounds and is always working on something related to waterfowl throughout the year. He loves to turkey hunt and fish for walleye and crappie in the spring. David is a university professor, holds an NRA Level II coaching certification and works with youth in trap and skeet shooting in the summer with his annual trap-shooting academy.