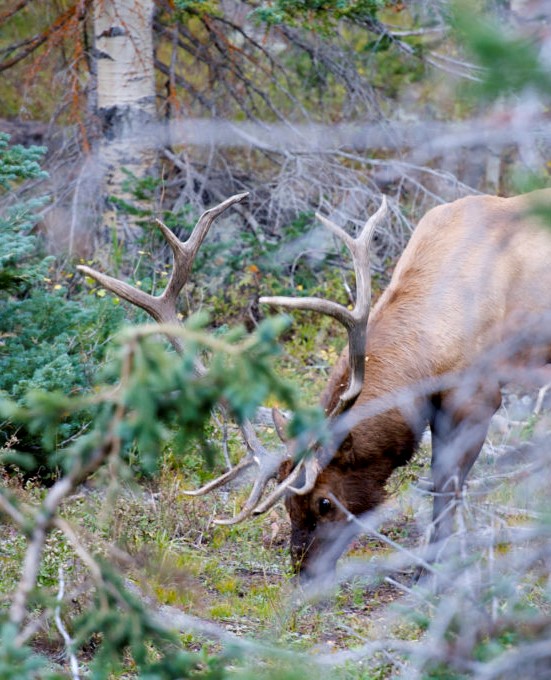 After 24 years of applying, a hunter finally draws a Limited Entry elk tag in Utah. A big bull comes to the call and stops head-on. Should he take the shot?

Several years back, my friend George contacted me with the exciting news that he had finally drawn the bull elk tag of a lifetime. He’d been applying for the tag in his home state of Utah for a quarter century, and now that he finally had it wanted to work hard to harvest the best bull he could. He asked me to help, and of course, I was pleased to do so.

The season was just around the corner when George called and said he was experiencing trouble with his gun, a single-shot rifle chambered in .300 Winchester Magnum. He thought he could figure it out, and would keep me updated. A couple days pre-season he arrived in my hometown, set up camp in the little local motel, and we hopped in the truck to go do a little shooting. He was still worried about his rifle, and with good reason; we couldn’t get it to group at all. This hunt was a huge deal, and it didn’t take long to decide that he should borrow one of my rifles; a beautiful left-handed bolt action chambered in 6.5 PRC. The cartridge was new on the shooting scene, and perhaps a bit light for elk. But I’d seen my wife and daughter both shoot elk with the 6.5 Creedmoor with good results. This cartridge was a bit juicier and should do just fine.

The rifle was a superbly accurate ClymR model by Gunwerks, sporting a 24” barrel and 2.5 lb. TriggerTech trigger. George shoots left-handed like me, so it was a perfect fit. The scope is a 3-18X44 Leupold VX-6HD model, complete with their superb zero-stop, zero-lock turret. Leupold cut a CDS (Custom Dial System) turret to match the rifle’s ballistics. All George needed to do was range an animal, turn the CDS turret to match the yardage, and execute a good shot.

The ammunition I’d been using in the rifle was Hornady Match, loaded with their 147-grain ELD-M projectile. It’s fantastically accurate stuff, and I’d killed several mule deer and a pronghorn antelope with it, experiencing stellar terminal performance each time. However, the ammo is controversial for hunting, being a soft bullet that’s not actually designed for penetration. But I figured we’d be okay, certainly better off than hunting with a rifle that couldn’t group inside a basketball-sized target at 100 yards.

George shot a couple tiny 200-yard groups with the rifle to check his zero and then practiced field-type shots at distances ranging out to 1,000 yards or so. He wouldn’t shoot that far at an elk, but after making superb hits at every range his confidence was high.

Opening day arrived, finding us high on a ridgetop searching for elk climbing toward their daytime bedding areas. A herd passed up the ridge from us, and after a wild, lung-heaving run we managed to close within range. A beautiful 6X7 bull crossed the ridge, but it was the first hour of the first day and we were loath to end our adventure so soon. George opted to pass on the bull in hopes that we could enjoy the hunt longer and find something even bigger.

Several days passed by, each with its own unique experiences. One day we followed a herd of elk with four or five bugling bulls through thick pinyon and juniper forest. Several bulls filed away through the trees, crossing obliquely up a red-dirt ridge. One, in particular, caught my eye, not a super high-scoring bull but one with 6 heavy, symmetrical points on each side and main beams reaching far back toward his hips.

The next morning was quiet, with the area seemingly devoid of elk. We worked our way up the mountainside, glassing, calling, and listening. Eventually, a bull answered my cow calls, and we moved toward the sound. He bugled again, closer this time. We stopped on a little point and George set up, his rifle resting over a big boulder. We could hear the bull coming, and fast. He was 500 yards out when I caught my first glimpse; it was the heavy bull from the day before, and he was alone. On a trot, he dropped into a series of ravines, still headed our way. George chambered a round.

A low ridge ran between us, crossing the bull’s path at right angles. Bugling aggressively, he walked onto the ridge and stood facing us, his antlers shining in the morning sun. He was magnificent. George asked the range and I answered, “Right at 200 yards. Do you want to take him?”

Place yourself in George’s position: You’ve waited over 2 decades for this moment. The bull is standing still, facing you dead on. You have a perfectly solid rest and are shooting an amazingly accurate rifle that’s zeroed at exactly this range. Knowing the variables, including what ammo is in your magazine, would you take the shot?

I had expressed my admiration for this bull when we saw him the day before, and I think George made up his mind to shoot the elk if we saw him again. When I asked if he wanted to shoot him George whispered an affirmative and then shot the bull squarely in the chest. The bullet hit the elk very hard, causing him to buckle, sag, and then lunge down the hill a few jumps before piling up in a cloud of dust. But then he wobbled back to his feet, staggering like a drunken sailor on down the ridge. He was only on his feet a few seconds and then went down for good.

I was curious how the ELD-M bullet performed when faced with arguably the toughest shot angle on the toughest lower-48 big game animal, so I performed an informal autopsy on the bull. George’s shot had impacted perfectly in the center of the chest, and inside the skin there was a football-sized area of nothing but red jelly; the carotid, jugular, trachea, and esophagus were all completely gone. However, no part of the bullet made it into the thorax (heart and lung area). It had wholly disintegrated. Thankfully the kill was still rapid, putting the bull down in just seconds.

Knowing what I do now, I would not take that shot. Indeed, I wouldn’t use that bullet to hunt elk unless I was committed to take only fully broadside shots. It simply doesn’t have the right construction to cope with the heavy bone structure of a bull elk or moose. (I do, as a side note, still consider it an awesome deer and pronghorn bullet.)

Let me know your thoughts in the comment section below!

Timms: America’s Disarmament Advocates Revere the Australian Model Even as it Erodes Down Under