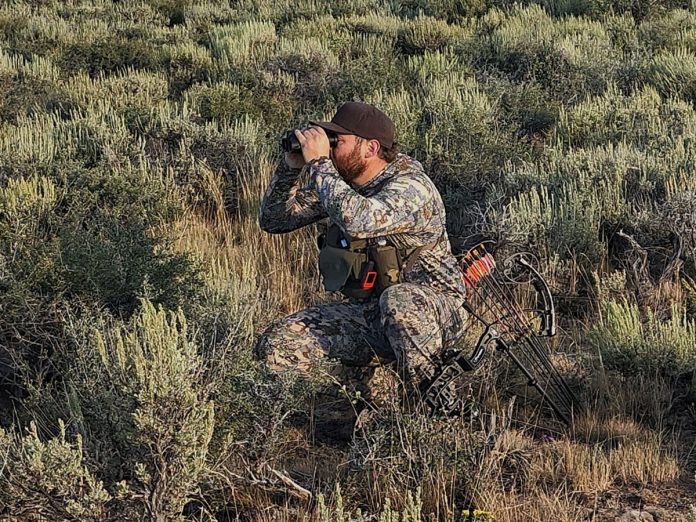 For a recent hot weather pronghorn archery hunt, I decided to try some of the Forloh warm weather camo. The shirt I tried was the Men’s SolAir Hooded Long Sleeve Shirt with Exposed camo pattern and the pants were the SolAir Lightweight Pants with Insect Shield. For an extra layer on cool mornings, I tried the SolAir Technical Hoodie.

I love that the Forloh clothing is American-made. I support American-owned companies making American products whenever I can. Their stuff is designed and sewn in the USA. They claim that their materials, down to their stickers, are American sourced and manufactured.

The clothing I tried was unbelievably comfortable. It was thin and stretchy. I could literally sleep in it. It fit quite well. I normally wear at least an XL shirt, but all they had in stock was the Large. It worked because of how stretchy it is.

Upon inspection of seams and details, the quality becomes obvious. The pants are double-stitched everywhere. Add the stretch and they’ll likely last forever. I’ve already spent four days straight in them. The environment was brush with thorns, sagebrush, and lava rock. You can’t tell they’ve ever been worn.

The pants were almost as good as wearing shorts but with the protection of long pants. The pants I tried also feature Insect Shield which is Permethrin infused into the fabric. It keeps biting flies, mosquitoes, and ticks off you. Permethrin is what they use inside dairies for bug control. The shirt has the option of having Insect Shield but it was out of stock. I’d definitely recommend the Insect Shield option as it’s scentless and proven to work and only adds $10 to the price. It’s supposed to stay in the fabric for 70 washings. I had ants all over in my blind and they never once crawled on me.

All the clothes I tried have an antimicrobial treatment that is supposed to last the life of the clothing. I have almost completely stopped wearing polyester against my skin or as a base layer because it smells so bad so fast. I can only usually get one day out of it and it’s done.

I wore the Forloh clothes for 4 days straight in 100-degree heat and sweated like crazy in them. I ended up elbow-deep in an antelope and got blood all over them which I rinsed off with water when I got back to camp. I would take them off each night and hang them to air out in my tent. I’m not going to tell you they were scentless, but they honestly weren’t bad. I think they’re getting close to what I get out of merino wool but not as hot and they should last longer as my merino seems to wear out, stretch out, or lose its shape pretty fast.

Forloh claims to use a special patented technology of minerals built into the fabric fibers that are claimed to keep you 3-4 degrees cooler. I can feel a difference with my skin when I touch the Forloh fabric vs another polyester shirt. It definitely feels cooler. I wanted to test this out more scientifically and ordered a laser thermometer and a touchless thermometer for checking people. I can’t get either thermometer to register any difference between the Forloh and regular polyester. I called Forloh and asked and they claim it has to be done in a lab. I can’t say for sure that this works, but supposedly an independent lab claims it does. They also claim the minerals give it a 300% wicking advantage. It was so dry on the desert hunting that anything you wore would have dried pretty quickly so I can’t really say whether the wicking was noticeably better. While I can’t say this definitely works, I also can’t say it doesn’t as the cloth feels cooler to my skin. Either way, the material is thin and the heat was bearable, so maybe there is something to it.

All the clothing listed had a 50+ UPF rating and the hood on the shirt will pull up over a hat and give your ears, neck, and back of the head some sun relief.

I pretty much wear camo to not be seen by other humans. Nobody knows for sure what animals see. I know there’s been a million deer killed by people wearing red flannel.  I think this Exposed camo pattern works pretty well for desert, sagebrush, and rock landscape. I personally think it’s a little ugly but that’s really just personal preference. I’m not sure what camo I’d score a 10.

All quality hunting or technical outdoor clothing is expensive. Today is Labor Day and as I write this, Forloh is having a 25% off sale day. That puts the prices of most of this clothing right there with other name brands that are not made in the USA. I honestly believe this Forloh stuff is built and sewn tougher after having looked at it and worn it. If you break it down by how many days you can wear it, sometimes buying the better quality gear is cheaper in the end.

You’ll definitely see more reviews of some of Forloh’s colder weather gear later as I’m super impressed with the hot weather gear. I didn’t find anything not to like about the clothes I tried out and it’s so much better than some of the other stuff I’ve spent my money on in the past. It gets a Hunt365 thumbs up for quality and innovative gear.