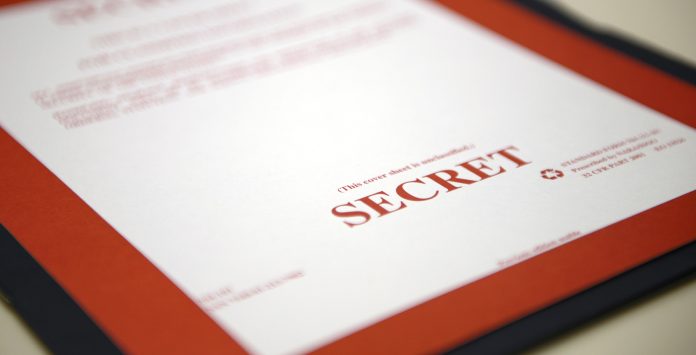 Take a few minutes to read this news story: The Media is Baffled After FBI Raid on Mar-a-Lago Recovers Dozens of ‘Classified’ Folders That are Empty.

Let me brief you, briefly. I’d like to explain what is going on. This entire brouhaha is absurd, on its face. The U.S. President is the only individual in the U.S. government that can declassify any document at will, and with no “Mother may I?” declassification panel — or a pre-determined declassification date. That includes collateral Sensitive Compartmented Information (SCI), Nuclear Q documents, and in fact any document at all!  President Trump has publicly stated that he had a Standard Operating Procedure (SOP) that dictated that any document that he took with him whenever he left the White House was deemed declassified. His former staffers have confirmed that was indeed the SOP. And the FBI knew that! So the high-drama Mar-a-Lago fiasco raid was stage-managed Kabuki theater.

Also, keep in mind that classification cover sheets by themselves are NOT classified. These are all clearly marked: “This cover sheet is unclassified.”  The cover sheets range from the ubiquitous “white with green trim” For Official Use Only (FOUO) cover sheet, to the dark blue Controlled Unclassified Information (CUI) cover sheet, the lighter blue Confidential sheet, and all the way up to Top Secret. The one-letter and two-letter SCI compartment identifiers — that I’m even to this day not allowed to mention — were annotated on Top Secret documents with rubber stamps or simply in bold pen notations.

For just over a year, one of my additional duties was as a Special Security Officer (SSO). Among other things, I handed the in-briefings (‘Read-ons”) and debriefings (“Read-offs”) for the TS/SBI cleared members of our unit.  Thankfully, I never had to launch an investigation into any mishandled documents. The entire Federal government and the DoD treats document classification very seriously. When I read the news reports about the Mar-A-Lago raid, they had me shaking my head in disbelief. All this news made me immediately question the motivation of the FBI’s leadership and the Department of Justice hierarchy. Again, they knew that a President could declassify documents at will. So, we must ask: Why did they authorize this raid, and what motivated their timing of it?  Did they somehow suspect that Citizen Donald Trump came into possession of classified documents after he left office? I really doubt that.

I should also mention that these days most classified documents are electronic–not paper holdings. There are now, in fact, entire offices in the intelligence community with NO file cabinets holding any paper documents. They might occasionally print out a few classified pages for the purposes of a briefing, a class, or a technical discussion, but those hard copies are run through a GSA-approved crosscut shredder before Close-of-Business, that same day.

And, by the way, there is no such thing as “above top secret.” That is a mass media myth. Top Secret is the highest classification, but SCI access is only granted to folks who hold a Top Secret/Special Background Investigation  (TS/SBI) clearance and a demonstrable need-to-know, to get them read-on for access to specific collateral TS/SCI compartments. There is only one individual deemed to have a need to know everything, with access to all SCI compartments, on demand, or by personal visit: The President. And he is the only “non-courier” who can legally hand carry a SCI document or electronic media out of a SCIF without the usual document inventory procedures.

Here is an illustrative aside: Back when I held a Top Secret clearance and I was read-on for SCI, I used to keep small stacks of cover sheets for various levels of classification in a fat file folder in my unlocked desk drawer. These were for my use whenever I generated new documents that needed to be classified. And often, at the Secret level and below, these were used cover sheets, as they were intended to be reused. This explains those “spare” cover sheets that were listed in the FBI’s Mar-A-Lago evidence inventory. Hearing the media screeching in alarm about excess cover sheets is downright laughable.

For some further reading on the world of classified projects and programs, I recommend two books. Both are now a bit dated, but the classification laws and policies described haven’t changed:

Both books are available through Books-A-Million (BAM).

In closing, I’ll quote something that was often humorously said at the end of ASA briefings:  “We can’t be held responsible if you draw any classified conclusions from this unclassified briefing.” – JWR

The Best Self-Defense Weapons for Women (that really work!)

Some general tank lessons from the Ukraine War