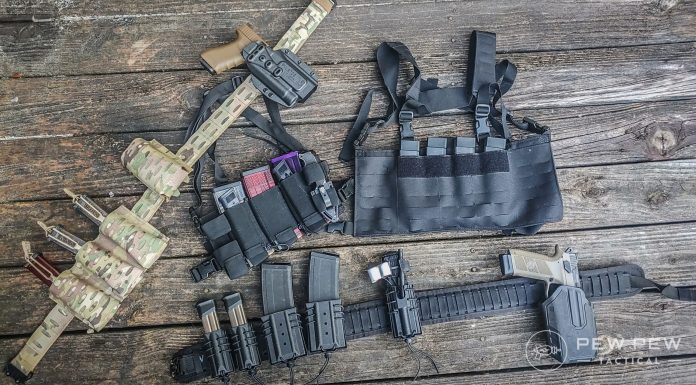 Back in 2008, when I joined the Marines, we had maybe 10 percent of the options we have now.

Heck, I thought MOLLE was cool, and being able to attach goodies directly to my body armor was the height of awesome.

These days the amount of gear accessible to the average shooter is stunning.

One of the biggest departments is load-bearing gear. Load-bearing gear is a catch-all term that applies to anything that can carry your magazines, medical gear, Snickers pouch, and so on.

There are lots and lots of load-bearing gear options on the market, and today we will dissect two of the more popular options that do not involve armor — the chest rig and the battle belt.

When I say chest rigs, I’m not talking about plate carriers or armored vests. I’m talking only about load-bearing gear.

Early chest rigs came out of China, and the famed SKS and AK rigs are still popular on the surplus market to this day. In the Rhodesian bush war, these were often adapted to fit FN FAL mags and formed the basis for the so-called Rhodesian Rig.

Over time the value of slapping magazines and tactical gear onto your chest became quite popular, especially as flak jackets and body armor became popular. If you’re already wearing a vest, why not throw some gear on it?

Early chest rigs were vests that zipped in the middle and lacked any real modularity. Pouches were placed where they were, and you had to deal with what you got.

The invention of MOLLE and other webbing systems made it appealing to attach gear directly to armor.

I’m just using armor as a bit of a historical example of chest-mounted gear. Modern chest rigs are often very minimalist compared to early examples. They allow you to carry your mags and tactical gear without armor when necessary.

Battle Belts have many names. We have the early American cartridge belt designed for the M1 Garand. Sometimes they are called war belts, tactical belts, and my personal favorite, Batman belts.

Over time the popularity of belt rigs waned, but they weren’t gone for good.

They were quite popular in the west during the World Wars, Korea, Vietnam, and other conflicts. The belts evolved steadily to incorporate modularity like the old ALICE pistol belts that used metal clips to mount gear.

Due to the rising popularity of chest rigs and body armor, battle belts began to a significant decline in use.

However, with the widespread adoption of plate carriers in 2009, the war belt made a comeback.

In Afghanistan, the smaller plate carriers didn’t offer everyone the room they needed for extra gear. Men in my squad stripped the belts off of their load-bearing vests for use as battle belts.

These belts were MOLLE compatible, and the guys in my unit began slowly moving more gear from their plate carriers to their belts.

Fast forward to 2021, and you can find dozens of high-quality battle belt options. Battle belts can now be seen on most infantrymen, Special Ops personnel, and those in combat arms roles.

Belt vs Chest Rig: Which Is Better?

So which is better? Well, one isn’t necessarily better, but each has downsides and advantages. There isn’t a correct answer, and like usual, mission dictates gear.

Mission and individual choices, of course. Some equipment is tougher to use than others with certain LBVs.

For example, I didn’t use a battle belt as a Marine because carrying belts of machinegun ammo on a war belt is tough to do.

Sometimes it’s the mission, and sometimes it’s a personal choice. Other times your equipment will dictate your choice.

I’ve become a big fan of battle belts these days. I use my Sentry Gunner and Wilder Tactical Belts all the time and greatly enjoy my experience with them.

As a professional LARPer and resident Florida man, I like the belts because they keep you much cooler.

A chest rig is like a sweater, at least to me. A battle belt allows you to breathe and keeps the air flowing. In a desert or jungle, staying cool is an energy saver that will keep you operating longer.

Battle belts are also very lightweight and comfortable to wear.

They don’t chafe, rub you raw, or beat you down. I like having the weight more on my hips and off my neck and shoulders, especially with a rifle loadout.

I’m also going to need a belt to carry my pistols, and why not have a belt that can also carry all my other gear? I can drop a few magazines, a pistol, spare mags, an IFAK, and other little gear I might need on my belt.

When our guys in Afghanistan moved to belts, they quickly found a significant benefit in being able to remove them quickly.

We often crossed rivers, streams, and the like, and quickly removing the belt and holding it above your head or around your shoulders kept your ammo and gear dry. Once you cross the river, toss it back on and call it a day.

With a battle belt, you can often assume a lower prone position. Putting magazines on your hip area lets you get low and stay low. You didn’t even have to break low prone to reach for a spare magazine.

Another bonus is the ability to easily access your individual first aid kit (IFAK). With a chest rig, an IFAK stays wherever it is; with a battle belt, you can pop off your belt and have your medical gear right in front of you for easy access and work.

Battle Belts are essential minimalist gear, but they are very efficient for their minimalism. You can put gear exactly where you want and swap your loadout to swap weapons. With a chest rig, you’ll need a MOLLE Setup or a dedicated platform for specific magazines.

Finally, having a utility belt puts me one step closer to being Batman, and I’ll take that.

Belts became less valuable as the war became more vehicle-based. A belt stuffed with gear makes it a real pain to sit inside a vehicle. In Iraq, everything was done in vehicles, so gear went on the chest.

If you work in and out of vehicles, you’re likely to get sick of a belt. Even in wildland firefighting, you can see the difference in how a hand crew works versus a dozer crew just by where they stage their gear.

A battle belt has you hanging magazines off the side of your body, making you wider than a 10-pack of Reese’s and an Icee. Sometimes you’ll feel your magazine bouncing off tight doorways, and it makes you a fair bit wider and bulkier.

If you want to rock and roll with a proper long-term sustainment pack, that’s tough to do with a belt. Larger sustainment packs often have hip pads and belts, and trying to use a battle belt in coordination with these hip pads is impossible.

Finally, you have to be a bit selective about where you place your gear. If you place your magazine too far forward, it’ll get in the way of your legs when you move positions.

Additionally, if you put long, heavy items near your spine, you risk injury if you fall rearward.

A belt is a belt, and they don’t stray much in design, but chest rigs come in many sizes and configurations.

You can sport a minimalist rig with a loadout of maybe a couple of magazines, an IFAK, and essentials — like Skittles.

On the other hand, you can get a big hefty chest rig that allows you to pack on a full combat load.

With a battle belt, you are stuck with a minimalist loadout almost entirely. Chest rigs offer a more diverse set of capacity and gear options.

Chest rigs typically feature numerous support straps that make carrying heavier loads possible. You can strap a large sustainment pack on and use the hip straps without issue.

All your gear is accessible when wearing a pack, and some chest rigs are set up to accept small packs as part of the rig.

They also offer unbeatable maneuverability for the lower body. You can move and groove up and down hills, change shooting positions, and all that other fun stuff without issue. Even inside a vehicle, chest rigs allow you to easily access your gear.

Most chest rigs also offer you a degree of ambidexterity. While it can be tougher to access certain items, it’s easier to access your magazines.

If you switch shoulders or have a hand injury, it’s easier to reach mags on your chest than on the opposite side of your body.

Some minimalist chest rigs also offer the ability to conceal the rig under a light jacket.

They also come in numerous designs and platforms. Some are just MOLLE panels where you attach the gear you want. Others have fixed locations for the pouches.

Certain rigs, like the Vertx Firebase Parabellum, can act as both a bandolier and a chest rig with a quick readjustment of straps.

Chest rigs offer a versatile and easy-to-use option for those looking to cover a variety of different situations.

Let’s go back to me being a professional Florida man. It’s always hot here. We get a month of winter which is most people’s fall. As such, a chest rig makes me sweaty and hot quite quickly.

Beyond the heat, chest rigs can typically be less comfortable than belts. They can dig into the shoulders and neck, chafe you, and create hotspots after hours of wear.

Sometimes chest rigs can feel constraining. While mags are almost always easy to reach, getting to your medical kit or extra gear can be a hassle.

Additionally, if it’s a full-sized chest rig, sometimes it can get in the way of drawing your pistol on the fly.

Donning and removing a chest rig is also not always a quick affair. You might need to undo belts, straps, and more just to pry the thing off you. It’s not as simple are undoing a belt and maybe an H-Harness.

You may be thinking, “why not both?” That’s certainly an option.

It’s a lot of gear, but heck, you might need a lot of gear. In fact, you can wear both and a plate carrier if you want. The only real downside is weight, cost, and training.

At the end of the day, it comes down to the mission and the user. Both have their pros and cons, but only you can choose what is appropriate for the situation and for yourself.

Are you team battle belt, team chest rig, or both? Let us know in the comments below! If you are a straight plate carrier truther, be sure to check out our guide to the best plate carriers.

“…shall strengthen thine heart: wait, I say, on the Lord.”

Gardening in a Post-Nuclear Fallout Environment, by Don Shift